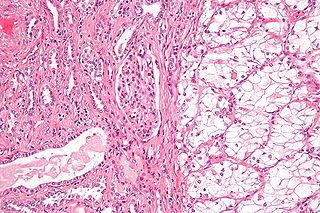 Renal cell carcinoma (RCC) is a kidney cancer that originates in the lining of the proximal convoluted tubule, a part of the very small tubes in the kidney that transport primary urine. RCC is the most common type of kidney cancer in adults, responsible for approximately 90–95% of cases. 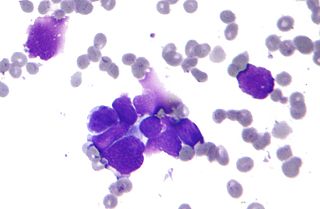 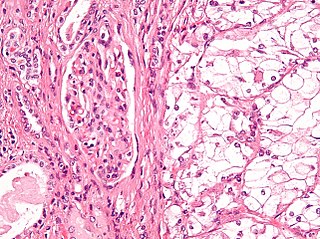 Kidney cancer, also known as renal cancer, is a type of cancer that starts in the cells in the kidney. 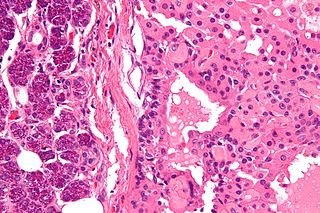 An oncocytoma is a tumor made up of oncocytes, epithelial cells characterized by an excessive amount of mitochondria, resulting in an abundant acidophilic, granular cytoplasm. The cells and the tumor that they compose are often benign but sometimes may be premalignant or malignant.

A chromophobe is a histological structure that does not stain readily, and thus appears relatively pale under the microscope.

Axitinib is a small molecule tyrosine kinase inhibitor developed by Pfizer. It has been shown to significantly inhibit growth of breast cancer in animal (xenograft) models and has shown partial responses in clinical trials with renal cell carcinoma (RCC) and several other tumour types.

Collecting duct carcinoma (CDC), is a type of kidney cancer that originates in the papillary duct of the kidney. It is rare, accounting for 1-3% of all kidney cancers. It is also recently described; a 2002 review found just 40 case reports worldwide. Previously, due to its location, CDC was commonly diagnosed as renal cell carcinoma or a subtype of renal cell carcinoma. However, CDC does not respond well to chemotherapy drugs used for renal cell carcinoma, and progresses and spreads more quickly.

A renal oncocytoma is a tumour of the kidney made up of oncocytes, a special kind of cell.

Kidney tumours are tumours, or growths, on or in the kidney. These growths can be benign or malignant.

Tivozanib is an oral VEGF receptor tyrosine kinase inhibitor. It has completed a Phase 3 investigation for the treatment of first line patients with renal cell carcinoma. The results from this first line study did not lead to US FDA approval, but tivozanib was approved by the European Medicines Agency (EMA) in August 2017.

Girentuximab is a chimeric IgG1 monoclonal antibody to carbonic anhydrase IX (CAIX). CAIX is expressed on the surface of most renal cancer cells and is hypothesized to be on the surface of other tumor cells. It is investigational agent in clinical trials for renal cell carcinoma. Its development was suspended as a "naked" or unconjugated antibody during phase III trials due to efficacy.

This is a timeline of kidney cancer, describing especially major discoveries and advances in treatment of the disease.