Ti-Château is an old Roman oppidum (currently only ruins and a rebuilt watch tower) located near the Belgian village of Hotton. It defended an ancient city/village at the current location of Hotton. The old oppidum and its ruins lie at a triangular plateau called the Plage de Renissart, near large rock cliffs above the river Ourthe. It is likely that Ti-château was already habituated during the Neolithic, though most excavations are Roman. [1] 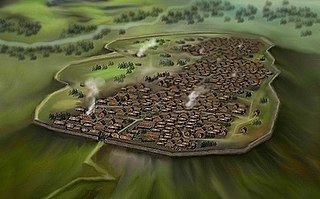 An oppidum is a large fortified Iron Age settlement. Oppida are associated with the Celtic late La Tène culture, emerging during the 2nd and 1st centuries BC, spread across Europe, stretching from Britain and Iberia in the west to the edge of the Hungarian plain in the east. They continued to be used until the Romans conquered Southern and Western Europe. In regions north of the rivers Danube and Rhine, such as most of Germania, where the populations remained independent from Rome, oppida continued to be used into the 1st century AD.

Ti-Château is also famous among tourists for its views over the Ourthe valley and the villages of Hotton and Hampteau. [2]

Hampteau is a village in the Belgian municipality of Hotton in the province of Luxembourg. The village lies at the south bank of the river Ourthe. It has around 300 inhabitants. Its postal code is 6990.

Hotton is a Walloon municipality of Belgium located in the province of Luxembourg. The municipality lies 12 kilometers from Marche-en-Famenne in the Ardennes and has more than 5,400 inhabitants. The river Ourthe crosses Hotton. 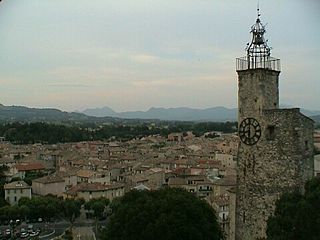 Vaison-la-Romaine is a commune in the Vaucluse department in the Provence-Alpes-Côte d'Azur region in southeastern France.The French archaeologist and hellenist Henri Metzger (1912–2007) died here.

Roquelaure is a commune in the Gers department in southwestern France. A type of knee-length cloak, which was worn by men in the 18th and 19th Centuries of the Common Era, is named for the commune. 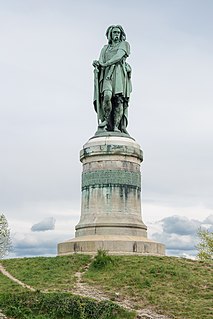 Alesia was the capital of the Mandubii, one of the Gallic tribes allied with the Aedui. The Celtic oppidum was conquered by Julius Caesar during the Gallic Wars and afterwards became a Gallo-Roman town. Its location was controversial for a long time. It is today considered to have been located on Mont-Auxois, near Alise-Sainte-Reine in Burgundy, France. 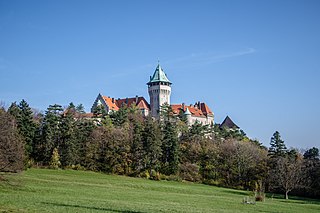 Smolenice is a village and municipality of Trnava District in the Trnava Region of Slovakia, on the foothills of the Little Carpathians. It is 60 km northeast of Bratislava and 25 km northwest of Trnava. The village is made of two parts, Smolenice and Smolenická Nová Ves. 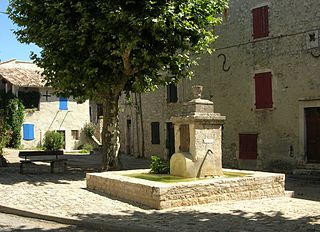 Alba-la-Romaine is a commune in the Ardèche department in the Auvergne-Rhône-Alpes region of southern France. 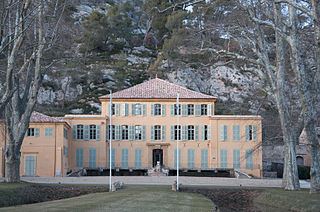 Le Tholonet is a commune in the Bouches-du-Rhône department in southern France. Its inhabitants are called Tholonétiens.

The Château d'Essalois is a restored castle in the commune of Chambles in the Loire département of France, overlooking a dammed portion of the Loire River, Lake Grangent. 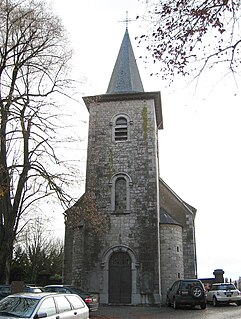 Bomal is a village in the municipality of Durbuy, Belgium. 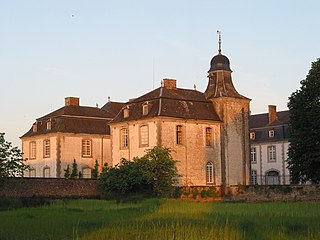 Deulin Castle is a château in the village of Deulin, which forms part of the commune of Hotton, in the province of Luxembourg, Belgium. 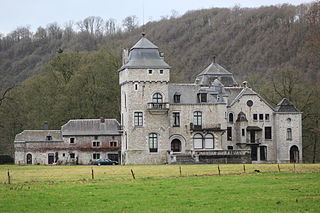 Lassus Castle is a château in Hamoir in the province of Liège, Belgium.

Ny is a village in Belgium.

The Château de Grèzes is a ruined 17th century castle in the commune of Grèzes in the Lozère département of France. 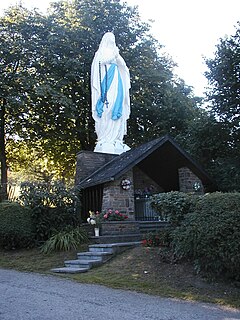 The Virgin of Werpin is a 11.4 m (37 ft) tall statue of the Virgin Mary in Werpin, Hotton municipality in Belgium. The statue itself is 7 m (23 ft) tall, and stands on a pedestal of 3.4 m (11 ft). In front of the statue stands a small prayer house. The statue was founded after an epidemic that hit the village. The funds were raised by the local father Janus, who led the operation. The statue was designed by Louis Hoyoux and Auguste Fabert, and it was inaugurated on 2 September 1931 by the Bishop of Namur, Monsignor Thomas Louis Heylen, and father Janus in the presence of 10,000 pilgrims.

The Faber Mill is a watermill in Hotton built in 1729. The mill is a listed building and is built from limestone with a pegged roof and is nowadays a museum. There are four levels inside the building: one level for the three mills, one for the pairs of millstones, one for the bolting and an attic. The mill has two wheels outside in a tributary of the river Ourthe. One wheel is made of wood and the other is made of metal. The mill still works for the enjoyment of tourists and produces different qualities of flour. 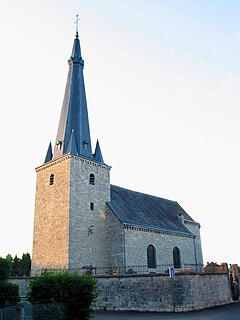 St. Peter's Church, Melreux is a Roman Catholic church on the Avenue de la Gare in Melreux in the municipality of Hotton, Belgium.

Riveo is an environmental interpretive centre of the river Ourthe situated in Hotton, Belgium, since April 2007.

Colonster Castle is a castle near Liège in Belgium, sited on a rocky spur in the Ourthe valley. It was first recorded in the 14th century but its present appearance is that of an 18th-century rebuild by Maximilien-Henri de Horion, which turned it from a stronghold into a pleasure palace, with interiors decorated by Paul-Joseph Delcloche. It and its park were acquired in 1963 by the University of Liège.