Ti-Ratana Welfare Society is one of the biggest independent, voluntary, Not-for-profit NGOs based in Kuala Lumpur, Malaysia. It is locally known and registered as "Persatuan Kebajikan Ti-Ratana"; while its Chinese name is 慈愛福利中心.

The society runs three children homes with over 250 children, two seniors' residences with about 50 senior citizens, a shelter home for women, and mobile clinics to provide free medical services to the people in the rural areas.

Ti-Ratana Welfare Society was founded by The Most Ven. Datuk K. Sri Dhammaratana and registered on 9 February 1994. The name is a reference to Three Jewels.

In 1996, a three-storey building was acquired through the generosity of a donor and the Ti-Ratana Children's Home was declared open by the National Unity and Social Welfare Minister YB Datuk Paduka Hajjah Zaleha bte Ismail on 21 June 1997.

The society is supported by donations from individuals, corporations and substantial from within Malaysia & surrounding countries. 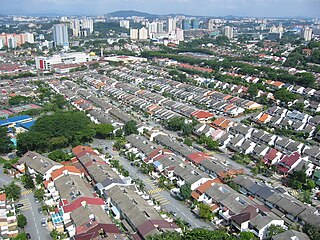 Bangsar is a residential suburb on the outskirts of Kuala Lumpur, lying about 4 kilometres (2.5 mi) south-west of the city centre. It is part of the Lembah Pantai parliamentary constituency. Bangsar is administered by Dewan Bandaraya Kuala Lumpur (DBKL), unlike other townships in the Klang Valley such as Petaling Jaya and Subang Jaya which have their municipal councils. Neighbourhood residents' associations and business councils play a part in communicating with the local authority, but they exercise no legal or administrative power. Malays make up most of the population at 61%, followed by the Chinese at 24%, Indians at 15%. 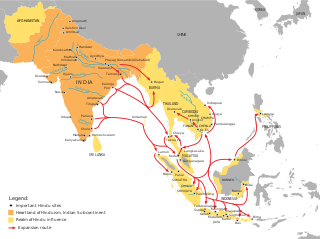 Buddhism is the second largest religion in Malaysia, after Islam, with 19.8% of Malaysia's population being Buddhist, although some estimates put that figure at 21.6% when combining estimates of numbers of Buddhists with figures for adherents of Chinese religions which incorporate elements of Buddhism. Buddhism in Malaysia is mainly practised by the ethnic Malaysian Chinese, but there are also Malaysian Siamese, Malaysian Sri Lankans and Burmese in Malaysia that practice Buddhism such as Ananda Krishnan and K. Sri Dhammananda and a sizeable population of Malaysian Indians.

Sprint Expressway is the main expressway network in Klang Valley, Malaysia. The 26.5 km (16.5 mi) of expressway is divided into three sections: the Kerinchi Link, Damansara Link and Penchala Link. It is a three-lane dual carriageway that was built to disperse traffic from congested inner city roads and narrow residential roads leading into the city of Kuala Lumpur from the Western suburbs of Petaling Jaya and Damansara and surrounding areas. This expressway is also known as Western Dispersal Link Scheme. It is one of the busiest expressway during rush hour from/to Kuala Lumpur. 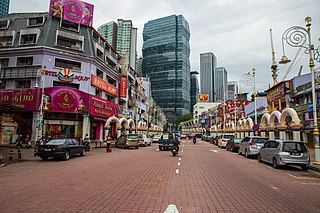 Brickfields is a neighbourhood located on the western flank central Kuala Lumpur, Malaysia. It is known as Kuala Lumpur's Little India due to the high percentage of Indian residents and businesses. Brickfields been ranked third in Airbnb's list of top trending destinations.

Abdul Kadir bin Yusof was a Malaysian politician. A lawyer by profession, Abdul Kadir held the posts of Attorney General and Solicitor-General at various points during his lifetime. He was also the Minister of Law. Together with his wife Fatimah Hashim, former Welfare Minister, Abdul Kadir represented one half of the first couple to be on the Malaysian cabinet. 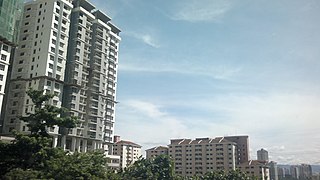 Segambut is a sub-district and a parliamentary constituency in Kuala Lumpur, Malaysia.

Kepong is a town in northern Kuala Lumpur, Malaysia. The name is a Malay word meaning "Enclose" or "Surround", as the town is surrounded by a mountain range.

Kampung Datuk Keramat or more commonly referred to as Keramat among the locals is a large zone in the Titiwangsa constituency, falling within the boundary of the Federal Territory of Kuala Lumpur, Malaysia. It is located northeast of downtown Kuala Lumpur and borders the district of Ampang in Selangor. The Klang River runs roughly from northeast to the west and acts as a natural divider of Keramat and Ampang.

Dato' Sir Ernest Emmanuel Clough Thuraisingham or E.E.C. Thuraisingham was the first local Member (Minister) for Education in the Communities Liaison Committee formed to build communal fraternity in British-ruled Malaya, from 1951–1955. He is also the first Asian chairman of the Selangor Turf Club.

Tan Sri Devaki Ayathurai Krishnan is a Malaysian politician. She became the first woman be elected to public office in Malaysia when she won a seat on the Municipal Council in Kuala Lumpur in 1952. She is currently a life member of the Malaysian Indian Congress (MIC).

Tun Datuk Seri Utama Syed Ahmad bin Syed Mahmud Shahabuddin was a Malaysian politician. He was the Menteri Besar of Kedah from 1967 to 1978 and the fifth Yang di-Pertua Negeri (Governor) of Melaka state from 1984 until 2004, the longest-serving governor of Malacca.

Dr. M. K. Rajakumar was a Malaysian doctor and socialist politician. As a doctor, he was a pioneer of the discipline of Family Medicine by general practitioners in Malaysia. As a leftist intellectual he was among the leaders of the Labour Party of Malaya and Barisan Sosialis in the 1960s, helping to build the Labour Party alongside Tan Chee Khoon, V. David and Ishak Haji Muhammad. 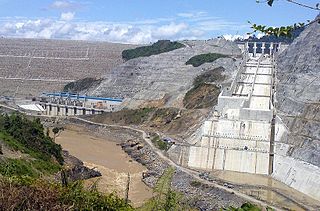 2011 in Malaysia is the 54th anniversary of Malaysia's independence.

Sri Lankan Malaysians are people of full or partial Sri Lankan descent who were born in or immigrated to Malaysia. 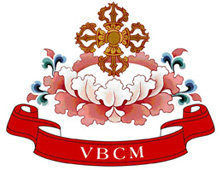 The Most Venerable Datuk K. Sri Dhammaratana 拿督达摩拉达那长老 is a Sri Lankan born Malaysian Buddhist monk and the incumbent Buddhist Chief High Priest of Malaysia, since the passing of his predecessor in 2006.