Ti-Sarana Buddhist Association was founded in 1976 with its original premises located at 85-A Marine Parade where its first Shrine Hall was inaugurated on 1 April 1978, during which the Sunday Dhamma School formally began. By 1980 the organization relocated at 90 Duku Road which serves as their primary venue till today. [1] The building was redeveloped and extended between 1988 and 2001 before being officially opened on 22 April 2001 by Venerable Bellana Sri Gnanawimala Mahā Nāyakathera. [2]

The Ti-Sarana Buddhist Association comes with the following appointments: 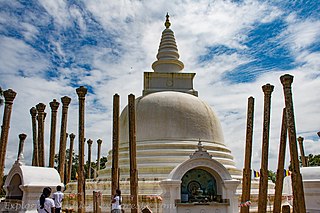 Theravāda is the most commonly accepted name of Buddhism's oldest extant school. The school's adherents, termed Theravādins, have preserved their version of Gautama Buddha's teaching in the Pāli Canon. The Pāli Canon is the only complete Buddhist canon surviving in a classical Indian language, Pāli, which serves as the school's sacred language and lingua franca. For over a millennium, theravādins have endeavored to preserve the dhamma as recorded in their school's texts. In contrast to Mahāyāna and Vajrayāna, Theravāda tends to be conservative in matters of doctrine and monastic discipline.

Vipassanā (Pāli) or vipaśyanā (Sanskrit) literally, "special-seeing", "special (Vi), seeing (Passanā)", is a Buddhist term that is often translated as "insight". The Pali Canon describes it as one of two qualities of mind which is developed (bhāvanā) in Buddhist meditation, the other being samatha. It is often defined as a form of meditation that seeks "insight into the true nature of reality", defined as anicca "impermanence", dukkha "suffering, unsatisfactoriness", anattā "non-self", the three marks of existence in the Theravada tradition, and as śūnyatā "emptiness" and Buddha-nature in the Mahayana traditions.

Mahāsī Sayādaw U Sobhana was a Burmese Theravada Buddhist monk and meditation master who had a significant impact on the teaching of vipassanā (insight) meditation in the West and throughout Asia.

Satya Narayan Goenka, commonly known as S. N. Goenka, was a Burmese-Indian teacher of Vipassanā meditation. Born in Burma to an Indian business family, he moved to India in 1969 and started teaching meditation. His teaching emphasized that the Buddha's path to liberation was non-sectarian, universal, and scientific in character. He became an influential teacher and played an important role in establishing non-commercial Vipassana meditation centers globally. He was awarded the Padma Bhushan by the Government of India in 2012, an award given for distinguished service of high order.

Bhāvanā literally means "development" or "cultivating" or "producing" in the sense of "calling into existence". It is an important concept in Buddhist praxis (Patipatti). The word bhavana normally appears in conjunction with another word forming a compound phrase such as citta-bhavana or metta-bhavana. When used on its own, bhavana signifies contemplation and 'spiritual cultivation' generally.

The Buddhist Publication Society is a charity whose goal is to explain and spread the doctrine of the Buddha. It was founded in Sri Lanka in 1958 by two Sri Lankan Buddhist laymen, A.S. Karunaratna and Richard Abeyasekera, and a European-born Buddhist monk, Nyanaponika Thera. Originally conceived as a limited effort to publish small, affordable books on fundamental Buddhist topics, the Society expanded its scope in response to the reception of their early publishing efforts. Reflecting its Sri Lankan roots, the Buddhist Publication society's publications reflect the perspective of the Theravada branch of Buddhism, drawing heavily from the Pali Canon for source material.

Jack Kornfield is a bestselling American author and teacher in the vipassana movement in American Theravada Buddhism. He trained as a Buddhist monk in Thailand, Burma and India, first as a student of the Thai forest master Ajahn Chah and Mahasi Sayadaw of Burma. He has taught meditation worldwide since 1974 and is one of the key teachers to introduce Buddhist Mindfulness practice to the West. In 1975, he co-founded the Insight Meditation Society in Barre, Massachusetts, with Sharon Salzberg and Joseph Goldstein, and subsequently in 1987, Spirit Rock Meditation Center in Woodacre, California. Kornfield has worked as a peacemaker and activist, organized teacher trainings, and led international gatherings of Buddhist teachers including the Dalai Lama.

Nissarana Vanaya is a renowned meditation monastery in Sri Lanka. It is located in Mitirigala in the Western province close to the town of Kirindiwela.

Commonly referred to as Luangpor Thong, Luangpor Thong Abhakaro is a Buddhist monk and teacher of Mahasati Meditation —a meditation method developed by his teacher, Luangpor Teean Jittasubho. The title Luangpor is used in Thailand to express respect for senior Buddhist monks and it means 'venerable father'.

The Nissarana Vanaya Meditation System was developed by Matara Sri Ñāṇārāma Mahathera, a highly respected senior meditation master of Sri Lanka and the first Upajjhaya of Sri Kalyani Yogasrama Samstha. This Buddhist meditation system uses samatha and vipassanā techniques in combination to allow what it claims are more intense insight results than ‘dry insight’ meditation. It was refined over decades by the head monks of the Nissarana Vanaya.

Śrī Kalyāṇī Yogāśrama Saṃsthā, also known as the Galduwa Forest Tradition is an independent part of the Sri Lankan Ramañña Nikāya Buddhist ordination line, with their headquarters in Galduva, Kahawa - Ambalangoda. They keep a strict standard of Vinaya, recognised as the strictest standard of any major organisation in Sri Lanka. It is the largest forest sect of the Sri Lankan Sangha. Their monks are easily recognised by the palm-leaf umbrella they use and by the habit of wearing the Sanghati whenever they walk outside the monastery boundaries. Remarkably for Sri Lanka, all castes are accepted for ordination. Foreign monks, who wish to become resident at one of their monasteries, are usually expected to undergo the so-called "Dalhi-Kamma" at Galduva, a short ceremony meant to reconfirm the validity of their original Upasampada according to Galduva standard. After that they are accepted according to their normal seniority. 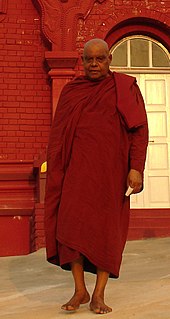 Most Ven. Nauyane Ariyadhamma Maha Thera‍ was a Sri Lankan bhikkhu and a senior meditation teacher. He was the spiritual advisor of the Sri Kalyani Yogasrama Samstha, and for many years resided at the Na Uyana Aranya. In 2011 he moved to Meetirigala Dharmayatanaya to help revitalize this long-standing place of learning and dhamma practice.

Most Ven. Kadawedduwe Sri Jinavamsa Maha Thera was a Sri Lankan (Sinhalese) Bhikkhu. He was the founder of Sri Kalyani Yogasrama Samstha, a reform movement within the Sri Lankan Rāmañña Nikāya.

Rajguru Aggavamsa Mahathera-𑄢𑄎𑄴𑄉𑄪𑄢𑄪 𑄃𑄉𑄳𑄉𑄤𑄁𑄥 𑄟𑄦𑄗𑄬𑄢 was one of the delegates from Bangladesh) in the Sixth Buddhist council held in Yangon, Burma in 1956.

Vipassana Meditation Centre, is a Buddhist monastery in Singapore set up in 1993 in propagating and perpetuating the practice of vipassana meditation in Singapore. This group is not related to non-sectarian society "Vipassana International Center (Singapore)", which offers 10 Day residential meditation courses, taught by SN Goenka, in the tradition of Sayagyi U Ba Khin.