Cornelia Schütt was born in Heiligenberg (Baden-Württemberg, Germany). Two months after her birth, she relocated to Cap-Haïtien, Haiti, where she spent her years growing up. [1] Born to German parents from Berlin, her father Carl Otto Schütt, at the age of 18, joined the family business in Cap-Haïtien that was in operation since 1832 and made frequent trips back and forth from Germany. After returning from an intern camp in the United States after World War II, he returned to Germany and met Corneilia' mother, Ingrid, an educated architect. She moved with him to Haiti to attend the Coffee farm. [5] [7] She received her nickname "TiCorn" ("Ti" is a colloquialism of the French word "petite," or "small" - thus "Small Corn[elia]") from her nanny Anna Colo, which she grew up with in Haiti. [1] [5] [8]

TiCorn released her first LP in 1979, titled "Haïti." She also played a singing role in the German film, Caribia. Although she does not consider herself an actress. [5] 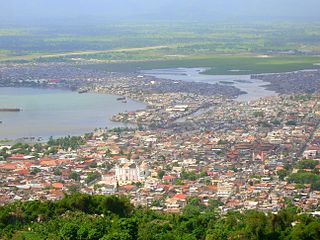 Cap-Haïtien, typically spelled Cape Haitien in English and often locally referred to as Le Cap or Au Cap, is a commune of about 190,000 people on the north coast of Haiti and capital of the department of Nord. Previously named Cap‑Français and Cap‑Henri during the rule of Henri I, it was historically nicknamed the Paris of the Antilles, because of its wealth and sophistication, expressed through its architecture and artistic life. It was an important city during the colonial period, serving as the capital of the French Colony of Saint-Domingue from the city's formal foundation in 1711 until 1770 when the capital was moved to Port-au-Prince. After the Haitian Revolution, it became the capital of the Kingdom of Haiti under King Henri I until 1820. 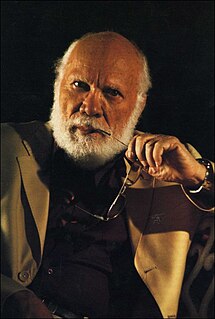 Frankétienne is a Haitian writer, poet, playwright, painter, musician, activist and intellectual. He is recognized as one of Haiti's leading writers and playwrights of both French and Haitian Creole, and is "known as the father of Haitian letters". As a painter, he is known for his colorful abstract works, often emphasizing the colors blue and red. He was a candidate for the Nobel Prize in Literature in 2009, made a Commander of the Ordre des Arts et Lettres, and was named UNESCO Artist for Peace in 2010.

The Haiti national football team represents Haiti in international football. Haiti is administered by the Fédération Haïtienne de Football (FHF), the governing body for football in Haiti. They have been a member of FIFA since 1934, a member of CONCACAF since 1961 and a member of the Caribbean Football Union (CFU) since 1978. Haiti's home ground is Stade Sylvio Cator in Port-au-Prince and the team's manager is Jean-Jacques Pierre.

Seymour Etienne Bottex was a Haitian painter. Born in Port-Margot, in northern Haiti, Bottex worked as a photographer until 1955 when his older brother Jean-Baptiste encouraged him to begin painting. He joined the Centre d'Art and later the Galerie Issa in Port-au-Prince. His paintings, mingling humorous, historical, and biblical themes, are exhibited worldwide and auctioned at Sotheby's in New York. He is considered one of the finest Haitian naïf painters, and his murals in the Episcopal Cathedral de Sainte Trinité in Port-au-Prince are considered the most important achievement in Haitian modern art.

Toto Bissainthe was a Haitian actress and singer known for her innovative blend of traditional Vodou and rural themes and music with contemporary lyricism and arrangements. Born in Cap-Haïtien in 1934, she left Haiti at an early age to pursue her acting studies abroad. Her career started in theatre with the company Les Griots, of which she was a founding member in 1956. Griots was at the vanguard of négritude-inspired cultural institutions in France, and was the first African theatre company in Paris.

Demesvar Delorme was a Haitian theoretician, writer, and politician. Born in Cap-Haïtien, Delorme participated in Sylvain Salnave's failed rebellion against President Fabre Geffrard in 1865. After the fall of Geffrard and Salnave's election as President of Haiti in 1867, Delorme was appointed Minister of External Relations and Minister of Public Education and Cults. In 1868, Delorme was forced to leave the country and fled to Paris, France. He lived there in exile for ten years, publishing several works. One of his best known writings was the essay "Les Théoriciens au Pouvoir", which postulated that political power should belong to the intellectual elite.

Léon Laleau was a Haitian writer, politician, and diplomat. Laleau is still recognized "as one of the most brilliant writers of his time". He received several international awards, such as the Edgar Allan Poe Prize in 1962. He was also a member of the Ronsard Academy, the Académie Méditerranéenne. He was recipient of numerous honors, including The Legion of Honor rank of Grand Officer (France), Saint Grégoire (Vatican), and Palms Académique, Arts et Lettres rank of Commandeur (France).

Jean-Baptiste Jean (1953–2002) was a Haitian painter. Born in Cap-Haïtien, Jean studied with Philomé Obin before joining the Centre d'Art in 1971. His paintings have been exhibited in the United States, the Dominican Republic, and France.

Guy Joachim is a Haitian painter. Born in Cap-Haïtien, Joachim is known for his paintings of historical scenes. His works have been exhibited in Germany, the United States, the Dominican Republic, and France.

The First Empire of Haiti, officially known as the Empire of Haiti, was an elective monarchy in North America. Haiti was controlled by France before declaring independence on 1 January 1804. The Governor-General of Haiti, Jean-Jacques Dessalines, created the empire on 22 September 1804. After being proclaimed emperor by the Generals of the Haitian Revolution Army, he held his coronation ceremony on 6 October and took the name Jacques I. The constitution of 20 May 1805, set out the way the empire was to be governed, with the country split into six military divisions. The general of each division corresponded directly with the emperor or the general in chief appointed by the emperor. The constitution also set out the succession to the throne, with the crown being elective and the reigning emperor having the power to appoint his successor. The constitution also banned white people, with the exception of naturalised Germans and Poles, from owning property inside the empire.

Football Inter Club Association; is a professional football club based in Cap-Haïtien, Haiti.

German Haitians are Haitians of German descent or Germans with Haitian citizenship.

Arly Larivière is a Haitian musician, composer and keyboardist. He is best known as the lead singer and composer for the Kompa band Nu-Look.

Marlène Rigaud Apollon is a Haitian educator and writer who has been living in the United States since 1964.

Volo Volo de Boston is a Haitian compas band based in Boston, Massachusetts. 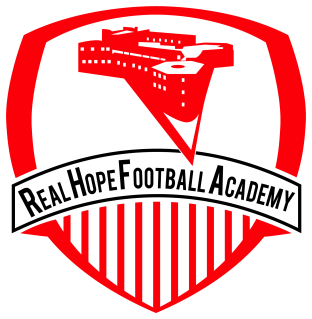 Real Hope Football Academy is a professional football club based in Cap-Haïtien, Haiti.

L'union Suite is a Haitian-American lifestyle, tourism, culture, society, and entertainment media company based in South Florida. L'union Suite has quickly become the number one platform for Haitian-Americans with over 450,000 subscriptions and a reach of around 5–10 million weekly.