TiVi5 Monde (French pronunciation: ​ [ti vi sɛ̃k mɔ̃d] ), stylized as TiVi5 MONDE, is an international pay television channel launched at the end of January 2012 [1] by the Francophone network TV5 Monde, which is aimed mainly to French-speaking African children (4–13 years). [2] Its main goal is to teach French to young children through dedicated programs. [2]

In the other regions, TiVi5 Monde is a block on TV5 Monde.

TiVi5 Monde airs educational programs, cartoons, children's series and games. Starting 2016, 12% of the productions broadcast in the channel are African. All the programs are French-speaking; the channel doesn't make any French dubbing of American series. [2] [3] Its programs both playful and educational are broadcast without advertising. [1]

This is a list of the programs formerly or currently broadcast on the channel: [4] 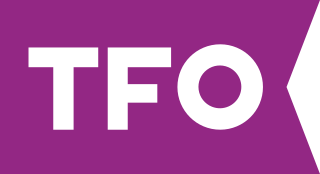 TFO is a Canadian French language educational television channel and media organization serving the province of Ontario. It is owned by the Ontario French-language Educational Communications Authority (OTELFO), a Crown corporation owned by the Government of Ontario and operating as Groupe Média TFO. It is the only French-language television service in Canada that operates entirely outside Quebec. The network airs cultural programming, including blocks of French-language children's programs, along with original series, documentaries, and films. 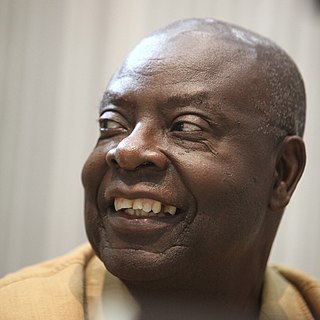 Emmanuel Boundzéki Dongala is a Congolese chemist and novelist. He was born in Brazzaville, Republic of Congo, in 1941. He was Richard B. Fisher Chair in Natural Sciences at Bard College at Simon's Rock until 2014.

Canal J is a French pay television channel dedicated to children's programming. It is aimed at children aged seven to fourteen.

Mounir Majidi is a Moroccan businessman. He has been the personal secretary of King Mohammed VI since 2000 and president of the royal holding, SIGER, since 2002. He is also the president of Maroc Culture, the organization behind the Mawazine festival, of the Fath Union Sport (FUS) Rabat, of the Mohammed VI soccer academy, and of the Cheikh Zaid hospital's foundation.

Kids Channel was a Mauritian free-to-air cartoon television channel owned and by Mauritius Broadcasting Corporation (MBC). The Knowledge Channel came into operation on 18 September 2007 playing cartoons, anime, teen sitcoms, game shows and educational children's TV series in both English and French. On 15 September 2014, the MBC renamed it to Kids Channel. At a certain time, the frequency went on live streaming of TV5Monde. The channel went off-air on 31 January 2015 and MBC reviewed their programming of all its channels. The closure also includes MBC News Channel. It was available on digital terrestrial television. 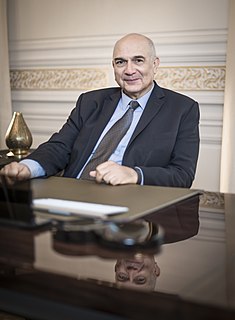 Mostafa Terrab is a Businessman and industrialist, has been the chairman and chief executive officer of the Moroccan state-owned phosphate-mining company OCP since 2006. Since 2019 Terrab has also been President of the International Fertilizer Organisation. He was an adviser to the late King Hassan II and member of the G-14 think-tank, which counted figures such as Taieb Fassi-Fihri and Driss Jettou.

TiJi is a French & Russian television channel for children aged three to six.

La Chaîne Disney is a Canadian French language specialty channel owned by Teletoon Canada, Inc., a subsidiary of Corus Entertainment, and launched on September 1, 2015, replacing Télétoon Rétro. It is a localized version of the U.S. subscription network Disney Channel, broadcasting live-action and animated programming aimed at children in French in Canada.

France Info is a French domestic rolling news channel which started broadcasting on 31 August 2016 at 6:00 p.m. on the Web. TV broadcasting began on 1 September 2016 at 8:00 p.m. on most TV operators, and on the TNT. As for TNT Sat and Canalsat, it began on 6 September.

Rolande Kammogne is a Cameroonian entrepreneur and television producer. She is the founder of the pan-African TV channel VoxAfrica and producer of The Voice Afrique Francophone.

Olivier Barlet is a French journalist, translator, film critic and researcher on African cinema and its diasporas.

Kouadio Konan Bertin, known as KKB, is an Ivorian politician. He represented Port-Bouët in the National Assembly from 2011 to 2016. 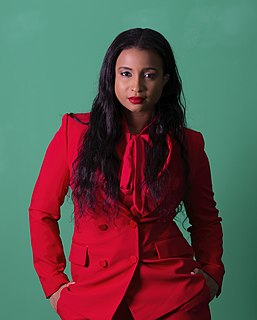