Antoine Rossini Jean-Baptiste, born Emmanuel Jean-Baptiste, and better known as Ti Manno, [1] was one of, if not the most, beloved and well known Haitian singer. His lyrics were avant-garde, he sang about the condition of the Haitian people, sexism, sexual harassment, power harassment, discrimination.

In 1978 he was the lead singer for DP Express one of the biggest and most popular Haitian bands at the time. Ti Manno left DP Express in 1981 and formed his own group "Gemini All Stars" and this group released five albums altogether. [2]

Sadly in late 1983 he became very sick in New York with an untreatable illness. The Haitian community and music producers gathered together to raise money to try and save the superstar. "Operasyon men Kontre" set off and raised well over $15,000 toward Ti Manno's hospital care. On May 13, 1985 the legendary Antoine Rossini Jean Baptiste aka Ti Manno died in Mount Sinai Morningside(then St. Luke's-Roosevelt Hospital Center) .

On May 18, 1985, right after the death of Ti Manno, thousands of fans flooded the Eastern Parkway funeral hall in New York City where his viewing was held. Many artists, family members, media personalities and fans attended his viewing and funeral at St. Matthew's church Eastern Parkway, which was conducted by his brother who was a priest, to pay their respects. He is buried at Calvary Cemetery.

With Gemini All Stars

Nemours Jean-Baptiste was a Haitian saxophonist, writer, and band leader. He is credited with being the inventor of compas, also known as compas direct, a style of Haitian music.

Kassav' is a Caribbean band formed in Guadeloupe in 1979. The core members of the band are Jocelyne Béroard, Jacob Desvarieux, Jean-Philippe Marthély, Patrick St. Eloi, Jean-Claude Naimro, Claude Vamur and Georges Décimus. Kassav' have issued over 20 albums, with a further 12 solo albums by band members.

Compas, is a dance music and modern Méringue of Haiti. The genre was popularized following the creation of Ensemble Aux Callebasses in (1955), which became Ensemble Nemours Jean-Baptiste In 1957. Compas is the main music of many countries such as Dominica and the French Antilles. This méringue style is influential in part of Africa, the Caribbean, Portugal, France, part of Canada, South and North America.

Pierre Georges Henry was a French composer, considered a pioneer of musique concrète.

Lucknerson Mervil is a Haitian-Canadian actor and singer-songwriter. He is known for support of Quebec independence, and was named Patriot of the Year 2004 by the Saint-Jean-Baptiste Society.

Un autre monde is a 1984 album by French rock band Téléphone. The album features John Entwistle playing the horn. The painting on the cover is by François Sévemon and the photography is credited to Lynn Goldsmith, Penny Smith and Jean-Baptiste Mondino.

Véronique Cloutier is a popular French Canadian TV and radio personality. She is the daughter of producer Guy Cloutier and the sister of Stéphanie Cloutier. She has hosted various programs on Radio-Canada, including La Fureur, Véro and Paquet Voleur. Her daily show Le Véro Show on Rythme FM is one of the most popular Quebec radio programs.

Empire Bakuba is an influential soukous band that formed in Zaire in 1972. The name of the band refers to the Bakuba Kingdom; it is sometimes reported as Empire Bakuba du Grand Kalle, in honor of Grand Kalle, the "father of Congolese music", who was also bandleader Pepe Kalle's mentor. The band has never formally disbanded, although its activity has been scarce since Pepe Kalle's death.

Eddy François is a Haitian musician, 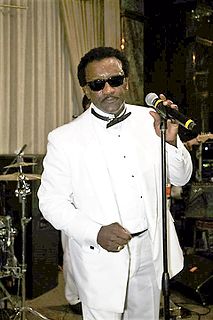 Volo Volo de Boston is a Haitian compas band based in Boston, Massachusetts.

Magnum Band is a kompa band formed on June 24, 1976 by André Pasquet, former musician of the group Tabou Combo, and his brother Claude Pasquet in Miami.

Shleu-Shleu is a kompa band formed on 22 December 1965 in Bas-Peut de Chose, Por-au-Prince by former members of the groupes Lorenceau and Memfoubins, managed by Hugues "Dada" Jackaman an Arab Haitian businessman of Palestinian origin, and directed by Tony Moïse on the ashes of Les Manfoubins created by Jean Baptiste, Jacques Vabre, Camille Philippe and Kiki Bayard and Following the demise of Les Frères Lorenceau. During their first appearance, Nemours Jean-Baptiste renamed them Mini Jazz, due to their reduced format, thus unknowingly coining the term mini-jazz, also referring to the mini-skirt fashion of the time. The new band was composed of a solo saxophonist, Tony Moise, Jean-Claude Pierre-Charles and Hans Cherubin on lead vocals. After living throughout Haiti, they achieved international notoriety, and in 1970, they were hired to travel to New York City to perform at Casa Borinquen. They decided to stay in NYC. They have played in many large American cities, spreading many of the musical gems of the Haitian diaspora. In 1976, many of the original members of the band had to leave New York for several reasons. This instability created a period of decline that lasted until 1991 when Jean-Baptiste Smith decided to revive the band with the addition of new musicians, such as the talented saxophonist Evens Latortue, guitarist Eddy Altine, percussionist Joseph Savius.

Jean-Jérôme Imbault was a French violinist and music publisher at the end of the 18th century and the beginning of the 19th century.

Jean-Baptiste Favory is a French sound artist and composer of musique concrète, electronic and instrumental music.