Ti Rincontrerò may refer to:

Son de Sol is a Spanish flamenco-pop band, made up of three sisters from Écija, Seville, Andalusia. The trio was selected to represent Spain in the Eurovision Song Contest 2005, to be held in Kiev, although they only obtained the 21st position.

Džej Ramadanovski is a popular Serbian recording of mixed Romani and Macedonian ethnicity.

"Pero Me Acuerdo de Ti" is a song written and produced by Rudy Pérez. It was first recorded by Puerto Rican singer Lourdes Robles on her album Definitivamente (1991). In the ballad, the singer remembers her lover even when she tries to forget. Nine years later, American recording artist Christina Aguilera performed a cover version on her second studio album Mi Reflejo which Pérez also produced. It was released as the second single from the album in December 2000. The music video for Aguilera's version was directed by Kevin Bray.

Cerca de ti is both the third Spanish single from Thalía's 2003 crossover album Thalía and the first from her 2004 Greatest Hits compilation. The ballad was written by Thalía and produced by Steve Morales. Also, an English version was previously recorded for the 2002 Thalía album, entitled "Closer to You".

Kaliopi Bukle, known professionally as Kaliopi, is a Macedonian singer-songwriter. In her career, Kaliopi has progressed from singing lead vocal with her eponymous band in 1980s Yugoslavia to being an established vocalist and composer working in North Macedonia and across former Yugoslavia. She represented Macedonia twice in the Eurovision Song Contest, first in 2012 in Baku, Azerbaijan with "Crno i belo" and a second time in 2016 in Stockholm, Sweden with the song "Dona".

"Samba Pa Ti" is an instrumental by Latin rock band Santana, from their 1970 album, Abraxas. In English, the title means "Samba for You." It was released as a single in 1973. The song charted at #11 in the Netherlands, #43 on the German charts,, and #27 on the UK Singles Chart, Santana's first single to chart in the United Kingdom.

"Felicidad" (Happiness) is a song by Gloria Estefan, released as her fifth promotional single, and seventh single in total, and featuring on her second Spanish album Abriendo Puertas.

Enrique Iglesias: 95/08 Éxitos is a compilation album by Spanish singer songwriter Enrique Iglesias. Includes his seventeen number-one singles in the Billboard Hot Latin Tracks and two new songs, "¿Dónde Están Corazón?" and "Lloro Por Ti", both written by Enrique Iglesias and Coti Sorokin. The album's two singles "¿Dónde Están Corazón?" and "Lloro Por Tí" became his 18th and 19th number one singles on the Hot Latin Songs, achieving more number ones than any other artist in the history of the chart.

"Enamorada de Ti" is a song recorded by American Tejano recording artist Selena and originally written for her second studio album, Ven Conmigo (1990). The song was written by Selena y Los Dinos band member Pete Astudillo and her brother, A.B. Quintanilla III, and produced by Quintanilla, and is a Spanish-language adaptation of "Is It the Beat?", an English song originally written by Quintanilla and Pamela Phillips Oland. "Enamorada de Ti" is a freestyle song, a musical genre popular during the late 1980s. The recording was remixed by Juan Magan for the eponymous album in 2012, a project headed by Humberto Gatica. Although the song was moderately successful during the early 1990s, it was exposed to a wider audience in the remix album Enamorada de Ti. Because of this, the song peaked at number 17 on the US Billboard Regional Mexican Digital Songs chart that year. In 1997, the posthumously-released remix version of "Is It the Beat?" adopted the rap verse found in "Enamorada de Ti".

"Gracias a Ti" is a song by Puerto Rican reggaeton duo Wisin & Yandel from their album, La Revolución (2009). The track was released as the third single from the album. A remixed version, featuring pop singer Enrique Iglesias was released on November 10, 2010. 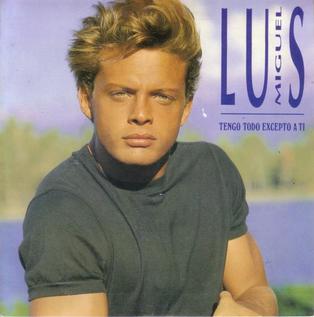 "Tengo Todo Excepto a Tí" is a pop song written, produced, and arranged by Juan Carlos Calderón, and performed by Mexican singer Luis Miguel. It was released as the lead single from his studio album 20 Años (1990). It reached the number one position all over Ibero-America, became his fourth number-one single in the Billboard Hot Latin Songs chart after "Ahora Te Puedes Marchar", "La Incondicional" and "Fría Como el Viento" and was nominated for Pop Song of the Year at the Lo Nuestro Awards. The parent album peaked at number two in the Latin Pop Albums chart and sold more than 600,000 copies in its first week of release.

"Sin Ti... Sin Mi" is a song written by Guatemalan singer-songwriter Ricardo Arjona for his eleventh studio album, 5to Piso (2008). The song was released as the second single from the album.

Se non te is a song recorded by Italian singer Laura Pausini and written by Pausini and Niccolò Agliardi. 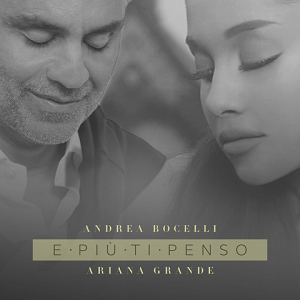 "E Più Ti Penso", alternatively titled "E Più Ti Penso " is an Italian song originally written by Ennio Morricone, Mogol, and Tony Renis for the movie Once Upon a Time in America. This is a song recorded by the Italian operatic-pop trio Il Volo in 2010 in their first CD Il Volo in 2010. Later this song was recorded by Italian singer Andrea Bocelli and American singer Ariana Grande. The song was released on 1 October 2015, and served as the lead single from Bocelli's album, Cinema (2015).