"Ti Sento" ("I feel you" or "I hear you") is a 1985 single by Italian group Matia Bazar. It reached number one in Belgian music charts and number two in the Dutch charts. [1] It has been covered multiple times. In 2009 a version by Scooter became an international hit.

"Ti Sento" is a single by German techno group Scooter, based on the 1985 song of the same name by Matia Bazar. The single features the former singer of Matia Bazar, Antonella Ruggiero, and was the second release from the 2009 album Under the Radar Over the Top .

The 1940s-themed video premièred on 18 September 2009. [10] Shot in a cinematic style, it depicts the three band members, H. P. Baxxter, Rick J. Jordan, and Michael Simon escorting Antonella Ruggiero into an opera house, wearing full formal outfits. They enter through a storm of paparazzi and reporters. Jordan and Simon appear to be securing the premises, as Baxxter goes to a balcony seat. Ruggiero portrays an operatic singer, and she prepares for a large show before a mirror. Jordan spots an attractive woman climbing the stairs, and doesn't give it a second thought. Ruggiero exits out on the stage, and sings for a full house. Baxxter, Jordan, and Simon watch the show, and they notice an assassin (who is in fact the woman Jordan spotted earlier) poking a high-precision rifle through the curtains on the floor above them. Jordan and Simon run up the stairs to apprehend the shooter, while Baxxter throws himself off the balcony in a failed attempt to take the bullet for Ruggiero. The bullet is fired, and Ruggiero dies in Baxxter's arms at the end of the video, as they escape the opera house.

An extended version of the video premièred 25 September 2009. The video features over 2 minutes of extra footage, and the extended version of the song. The end of the video shows the reflections of the three band members failed attempts to stop the sniper from killing Ruggiero. [11] The video, like many other Scooter videos, features a historic automobile, this one being a Citroën Traction Avant.

"Ti Sento" samples the original by Matia Bazar, of which Ruggiero was the lead singer at the time (from 1975 to 1989). The sound effect is from Wildstylez's "Music or noize". The pre-melody also samples Crypsis & Kold Konexion's "Sonic sabotage". 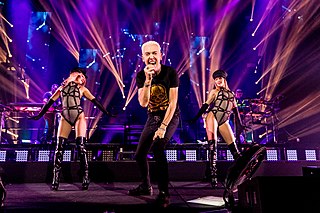 Scooter is a German happy hardcore, rave and techno music band founded in Hamburg in 1993. To date, the band has sold over 30 million records and earned over 80 Gold and Platinum awards. Scooter is considered the most commercially successful German single-record act with 23 top ten hits. The band is composed of lead vocalist H.P. Baxxter, German DJ/musician Michael Simon and musician/producer Sebastian Schilde.

The Stadium Techno Experience is the ninth studio album by Scooter. Three singles were released from it: "Weekend!", "The Night" and a remix of "Maria " featuring Marc Acardipane and Dick Rules. Its artwork is an homage to the 1991 album The White Room by The KLF. It is the first album featuring Jay Frog. In the United Kingdom, The Stadium Techno Experience became Scooter's second studio album in the top 40 after Our Happy Hardcore (1996). 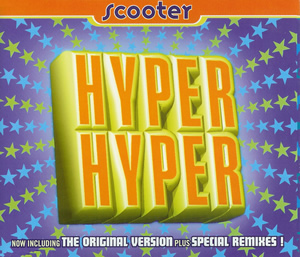 "Hyper Hyper" is a song by German band Scooter. It was released in May 1994 as the first single from their first album ... and the Beat Goes On!, released in 1995. It was sold in three versions: two of the versions had the same track listings, but different covers. "Hyper Hyper" was one of the most successful dance hits of 1994. 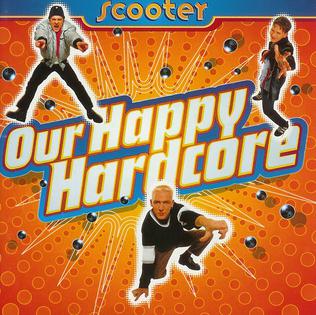 Our Happy Hardcore is the second studio album by German dance group Scooter. The European release date for the album was 28 March 1996. Three singles were released from the album, starting with "Back in the U.K." in November 1995 and "Let Me Be Your Valentine" in February 1996. The final single, a cover version of the Billy Idol song "Rebel Yell", followed in May 1996. The mostly instrumental "Crank It Up" is notable for its use as the theme tune for the Bruno segments in Da Ali G Show.

Antonella Ruggiero is an Italian singer. 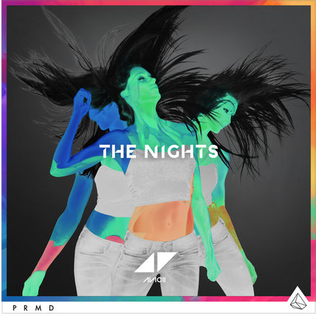 "The Nights" is a song by Swedish DJ and record producer Avicii and singer/songwriter Nicholas Furlong. On 1 December 2014, it was released as a digital download by PRMD Music and Universal Island on Avicii's The Days / Nights EP, then on 11 January 2015 in the United Kingdom. The song peaked at number six on the UK Singles Chart and number one on the UK Dance Chart. On 23 January 2015, Avicii released "The Nights ", his own remix of the song. The song appears on the UK version of Avicii's second studio album Stories (2015). The song was featured as a part of the football game by EA Sports, FIFA 15. In 2014, SportsCenter on ESPN used The Nights as a song to round out the year in sports. It was also used as the Carolina Hurricanes’ goal song from 2015 to 2018.

"I Like It Loud" is a song by Marc Acardipane Presents Marshall Masters Feat. The Ultimate MC, released in 1997. 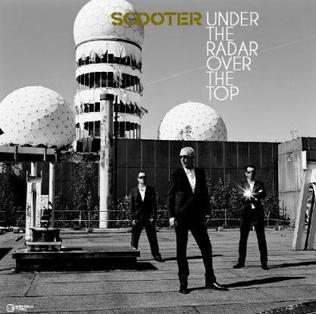 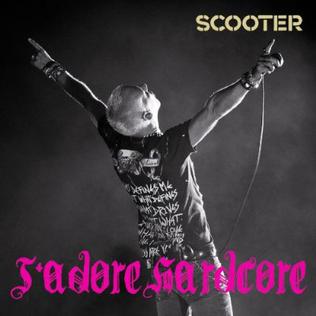 "J'adore Hardcore" is a single by German hard dance group Scooter. It was released as the first single from their 2009 album Under the Radar Over the Top on 14 August 2009. Record label All Around the World released the single in the UK on 2 November 2009. 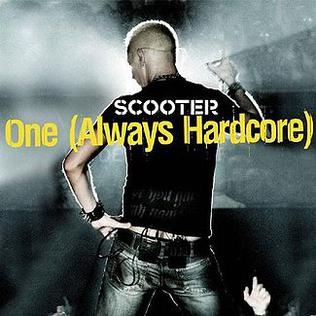 "One " is a song by German musical group Scooter. It was released in December 2004 as the third single from their 2004 album Mind The Gap. The radio edit is a remix of the song's album version, featuring more elaborate instrumental bridges.

This is the discography of German techno band Scooter. Founded in December 1993 in Hamburg, Scooter is known for being one of the most successful German bands as well as for having sold over 30 million records worldwide. Since 1993, the trio has released 20 studio albums, five compilation albums, five live albums and 70 singles, as well as six video albums and 72 music videos. Scooter, who have gathered 80 gold and platinum awards throughout the years, are composed of H.P. Baxxter, Michael Simon and Sebastian Schilde. 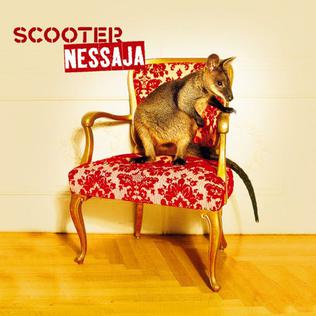 "Nessaja" is a song written by Peter Maffay and Rolf Zuckowski from the musical Tabaluga released in 1983 on the album Tabaluga oder die Reise zur Vernunft. German band Scooter released a version as single on 8 April 2002. It features as a bonus track on the group's first live album, Encore: Live and Direct, and was the first Scooter single to feature newest member at that time Jay Frog. The pitch shifted female vocals are performed by Nicole Sukar. "Nessaja" is one of Scooter's highest-charting singles, reaching number one in Germany, number two in Austria, Norway, and Romania, and number four in the United Kingdom.

"The Sound Above My Hair" is the third single release from the Scooter album Under the Radar Over the Top, following "J'adore Hardcore" and "Ti Sento". "The Sound Above My Hair" was first performed live at The Dome 52. The track used in the single was taken from a sample of "Wonderful Life" by the English alternative rock band Black. In addition, the track also samples the 19th century Shaker hymn, "Simple Gifts". H. P. Baxxter uses Auto-Tune effect while singing. 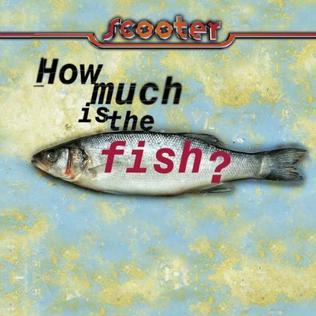 "How Much Is the Fish?" is a hardcore/euro-dance song by German group Scooter. It was released in June 1998 as the lead single from their fifth studio album No Time to Chill. It is the first song to feature Axel Coon. It was made for the France '98 FIFA World Cup. 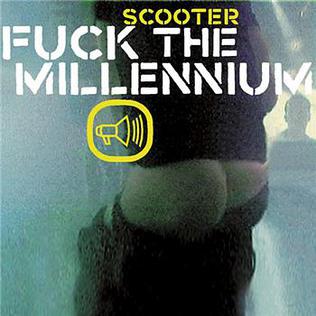 "Fuck the Millennium" is a song by German group Scooter. It was released in November 1999 as the second single from the album Back to the Heavyweight Jam. It reached the top-ten in three countries, peaking at number 2 in Belgium (Flanders), number 3 in Sweden and number 4 in Finland. 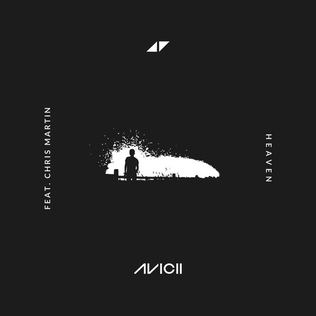 "Heaven" is the third posthumous single by Swedish DJ Avicii, featuring vocals by singer Chris Martin of British band Coldplay. The song was released on 6 June 2019, as the third single from Avicii's posthumous studio album Tim. The song became his third single, and his second posthumously, to reach number one on Billboard's Dance/Mix Show Airplay chart in its 27 July 2019 issue. 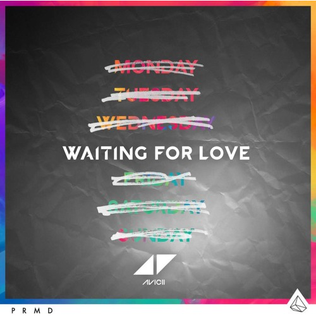 "Waiting for Love" is a song by Swedish DJ and music producer Avicii, produced by Avicii and Dutch producer Martin Garrix and featuring uncredited vocals from Simon Aldred, the former lead singer of English band Cherry Ghost. The track was released on 22 May 2015 as the lead single from Avicii's second studio album, Stories (2015). The lyrics were also written by Aldred.

"Catch & Release" is a song by American singer-songwriter Matt Simons taken from his album of the same name. It was released in September 2014 and became a hit in the Netherlands, Spain, Portugal, France, Switzerland and Belgium.