Ti Thong Road (Thai : ถนนตีทอง, RTGS: Thanon Ti Thong, pronounced  [tʰā.nǒn tīː tʰɔ̄ːŋ] ) is one of the roads in inner Bangkok or Rattanakosin Island. It's located in Phra Nakhon district, the short road is only 525 metres (1,722 ft) linking Bamrung Mueang road beside to Wat Suthat and the corner of Giant Swing plaza to Charoen Krung road in front of Sala Chalermkrung Royal Theatre area, including connects to Fueang Nakhon road by Ratchabophit road at the side of Wat Ratchabophit. It's a road that was built since the reign of King Mongkut (Rama IV).

The name of the road means "goldsmith road". It's the place where the Lao community migrated from Vientiane and Luang Prabang since early Rattanakosin period. These people have a career in gold leaf production. At present, this career no longer exists. But still appear evidence is an alley on the west side named "Trok Fueang Thong" (ตรอกเฟื่องทอง; lit: prosperous gold lane). 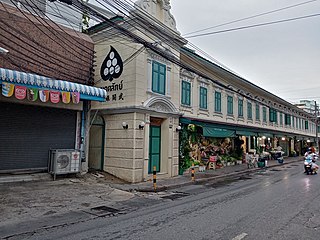 Ban Mo is the name of a street and its corresponding neighbourhood in Bangkok's Wang Burapha Phirom Subdistrict, Phra Nakhon District. It is located just outside the old inner moat in the historic Rattanakosin Island area. The road runs a short distance of 0.6 kilometres (0.37 mi) from Si Kak Phraya Si Intersection, where it meets Charoen Krung and Fueang Nakhon roads, to meet Chak Phet Road in the Pak Khlong Talat area. It passes the beginning of Phahurat Road at Ban Mo Intersection. It can be considered a road with one-way traffic management.

Dao Khanong is a khwaeng (sub-district) of Thon Buri District, Bangkok's Thonburi side. It is also the name of the surrounding area.

Fueang Nakhon Road is a road in inner Bangkok or Rattanakosin Island. It is located in Phra Nakhon district. It is a short road that is 0.5 km long. It runs from Si Kak Sao Chingcha to the south, passes through Wat Ratchabophit and across the Khlong Lot to end at Si Kak Phraya Si. Including connects to Ti Thong road by Ratchabophit road at the side of Wat Ratchabophit.

Saphan Han is a small bridge over the Khlong Rop Krung in the so-called Khlong Ong Ang in the areas of Bangkok's Chakkrawat sub-district, Samphanthawong district and Wang Burapha Phirom sub-district, Phra Nakhon district, including both a neighbourhood and namesake shopping district.

Atsadang Road is a road in inner Bangkok overlaps four Subdistricts of Phra Nakhon District, Bowon Niwet, San Chaopho Suea, Wat Ratchabophit, and Wang Burapha Phirom. It's starting from Ratchadamnoen Avenue in the area beside Sanam Luang and Phan Phiphop Lila Bridge pass through to the end at the junction of Chakkraphet Road and Charoen Rat 31 Bridge in the area of Pak Khlong Talat behind Ban Mo neighbourhood near the Chao Phraya River. There's Khlong Khu Mueang Doem or Khlong Lot parallel to the line. The opposite is Rachini Road.

Phra Borom Maha Ratchawang is a khwaeng (subdistrict) of Phra Nakhon District, in Bangkok, Thailand. In 2017 it had a total population of 3,953 people.

Wat Chanasongkhram Ratchaworamahawiharn, usually shortened to Wat Chana Songkhram, is a second-class royal monastery in Chana Songkram Sub-district, Phra Nakhon District, Bangkok, within area of Bang Lamphu opposite to Khaosan Road and next to Rambuttri Road.

Tanao Road is a road in Phra Nakhon District, Bangkok, starting from Bamrung Mueang Road at Si Kak Sao Chingcha straight to the north, it is also a boundary line between the San Chao Pho Suea and Sao Chingcha Subdistricts, then spans the Khlong Lot into the area of Bowon Niwet Subdistrict, then cut across Ratchadamnoen Avenue at Khok Wua Intersection, this phase it is a dividing line between the Bowon Niwet and Talat Yot Subdistricts, as far as bend to the intersection at Bowon Niwet, Sip Sam Hang, and Tani Roads converge in Bang Lamphu area near Khao San Road. 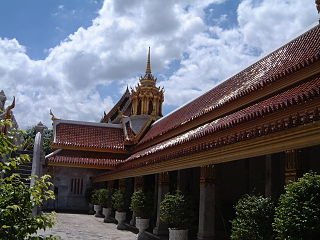 Ban Phan Thom is a community and one khwaeng (sub-district) of Phra Nakhon District, Bangkok. 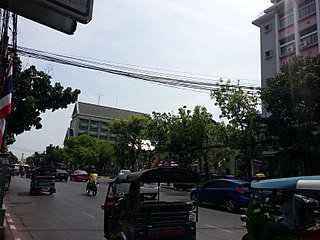 Tri Phet Road is a road in inner Bangkok, it is located in Wang Burapha Phirom Subdistrict, Phra Nakhon District, regarded as one of the memorials to the children of King Chulalongkorn who died as a child as same as Sirirat Hospital, or Uruphong Intersection etc. 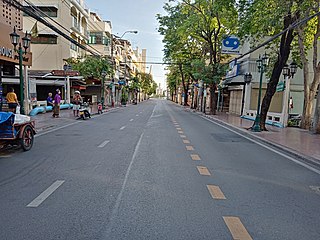 Dinso Road is a road in the area of Rattanakosin Island or Bangkok's old town zone. It has a starting point at the corner of the Giant Swing from Bamrung Mueang and Ti Thong Roads at front of the Devasathan and running through the side of Bangkok City Hall, then cuts across Ratchadamnoen Avenue at Democracy Monument, and through the side of Satriwittaya and Wat Bowon Niwet Schools in the Banglamphu area, as far as the end at the foot of Wan Chat Bridge, where it cuts with Phra Sumen and Prachathipatai Roads, total length of 850 m.

Unakan Road is a road in the Rattanakosin Island or Bangkok's old town zone, it is a road that has a beginning at Unakan intersetion, where it meets Charoen Krung and Burapha roads, opposite The Old Siam Plaza in Wang Burapha area. Then, it runs straight north in parallel with Wat Suthat and Siriphong road before ends at the corner of the Giant Swing, with a total distance is 446 m (1,463 ft). 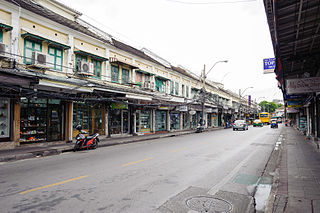 Talat Yot is a khwaeng (subdistrict) of Phra Nakhon District, Bangkok, considered to be majority area of Bang Lamphu neighbourhood.

Trok Mo Market, also known as Thesa Market, or officially as Ratchabophit Phatthana Community is a one wet market and community in Bangkok. It is regarded as one of Bangkok's busiest and oldest with most vibrant markets. Located in the area of Wat Ratchabophit Subdistrict, Phra Nakhon District, or Rattanakosin Island, the Bangkok's old town zone. Considered as one of the inner Bangkok's wet markets, in addition to Pak Khlong Talat and Tha Tian Market.

Maha Phruettharam is one of the five khwaeng (subdistrict) of Bang Rak District, Bangkok.

Sao Chingcha is one of the twelve khwaeng (subdistricts) of Phra Nakhon District, Bangkok.