Tia Ciata, born Hilária Batista de Almeida (1854–1924) was a Brazilian cook, mãe-de-santo of Candomblé, and an influential figure in the development of samba. [1] [2] She was born in Santo Amaro, Bahia, and initiated in Candomblé in Salvador by Bangboshe Obitikô (Rodolfo Martins de Andrade). She was a devotee of deity Oshun and became the iyakekerê, or second most important leader, in the terreiro of João Alabá in Rio de Janeiro. "Ciata", the name by which she is now known, is a variant on the Arabic name Aycha; it was a common feminine name among the Muslim community from Portuguese Guinea that formerly resided in Rio de Janeiro. [1]

Tia Ciata arrived in Rio de Janeiro in 1876 at the age of 22 and worked as a vendor at a food stall. [2] She lived on Rua Visconde de Itauna in the neighborhood of Praça Onze (now Cidade Nova), an area which became known as "Pequena África", or Little Africa. It was here that Tia Ciata became one of the main progenitors of Afro-Brazilian culture of early favelas of Rio de Janeiro. Samba musicians, composers, and dancers regularly gathered in her home; her residence may be one of the birthplaces of the genre. [1] [2] Samba evolved in Ciata’s back yard. Here you would find future giants of the genre including Pixinguinha, João da Baiana and Heitor dos Prazeres. [3] Ciata’s yard became a trendsetting cultural hub where new samba composers and songs could find popularity before the existence of radio in Brazil. The first samba recording, Pelo Telefone , a composition by Donga (Ernesto Joaquim Maria dos Santos) and Mauro de Almeida, was recorded in the residence. Like Tia Citata, the vocalist of Pelo Telefone was from Santo Amaro, Bahia. Police persecuted Black musicians and practitioners of Afro-Brazilian religions, despite the individual liberties promised by the 1891 constitution. Ciata grew smart at evading repression. A true samba party would necessarily require the presence of drums, which have always been negatively associated with the Afro-Brazilian religious cults. So Ciata would wisely place the samba musicians in the back yards, supposedly the most hidden and safest part of the house. In the entrance hall, the house’s most visible and audible space, brass and string instrumentalists would be playing ‘choro’ music – considered more erudite, and hardly linked to anything close to ‘Black magic’. When the police came, Ciata would say she was hosting a choro gathering and things would normally be fine for the rest of the night. [3] Ciata’s parties gained legitimacy thanks to a chance encounter with the president. As a practitioner of the Afro-Brazilian religion of Candomblé, she was highly respected for her spiritual wisdom. When President Venceslau Brás (1914-1918) sought a cure for a long-term leg infection that no doctor could treat, an adviser recommended Ciata’s herbal treatments. [3]

She married João Batista da Silva, and had fourteen children. The couple became noted figures in Pequena África of Rio, and Tia Ciata was honored annually at the Rio Carnival until her death in Rio de Janeiro in 1924. [1] 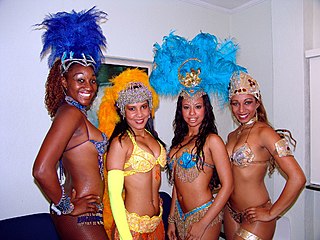 Samba is a lively dance of Afro-Brazilian origin in 2/4(2 by 4) time danced to samba music. 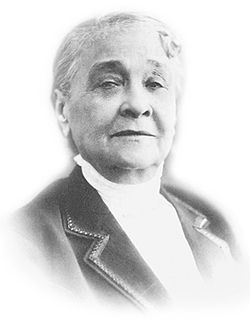 Axé is a popular music genre originated in Salvador, Bahia, Brazil in the 1980s, fusing different Afro-Caribbean genres, such as marcha, reggae, and calypso. It also includes influences of Brazilian music such as frevo, forró and carixada. The word Axé comes from the Yoruba term àṣẹ, meaning “soul, light, spirit or good vibrations”. Axé is also present in the Candomblé religion, as “the imagined spiritual power and energy bestowed upon practitioners by the pantheon of orixás”.

The Carnival of Brazil is an annual Brazilian festival held the Friday afternoon before Ash Wednesday at noon, which marks the beginning of Lent, the forty-day period before Easter. During Lent, Roman Catholics and some other Christians traditionally abstained from the consumption of meat and poultry, hence the term "carnival", from carnelevare, "to remove meat." 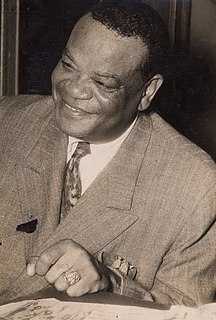 Alfredo da Rocha Viana Filho, known as Pixinguinha was a Brazilian composer, arranger, flautist and saxophonist born in Rio de Janeiro. And diede in Febuary 17, 1973. Pixinguinha is considered one of the greatest Brazilian composers of popular music, particularly within the genre of music known as choro. By integrating the music of the older choro composers of the 19th century with contemporary jazz-like harmonies, Afro-Brazilian rhythms, and sophisticated arrangements, he introduced choro to a new audience and helped to popularize it as a uniquely Brazilian genre. He was also one of the first Brazilian musicians and composers to take advantage of the new professional opportunities offered to musicians by the new technologies of radio broadcasting and studio recording. Pixinguinha composed dozens of choros, including some of the best-known works in the genre such as "Carinhoso", "Glória", "Lamento" and "Um a Zero". 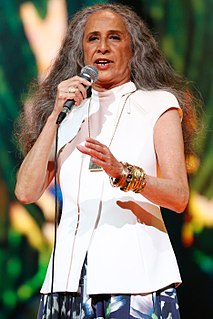 Maria Bethânia Viana Teles Veloso is a Brazilian singer and songwriter. Born in Santo Amaro, Bahia, she started her career in Rio de Janeiro in 1964 with the show "Opinião" ("Opinion"). Due to its popularity, with performances all over the country, and the popularity of her 1965 single "Carcará", the artist became a star in Brazil. 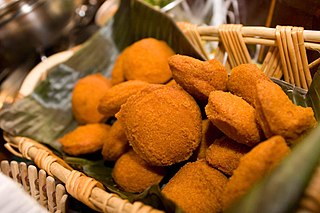 Àkàrà (Yoruba)(English: Bean cake Hausa: kosai, Portuguese: Acarajé is a type of fritter made from cowpeas or beans. It is found throughout West African, Caribbean, and Brazilian cuisines. The dish is traditionally encountered in Brazil's northeastern state of Bahia, especially in the city of Salvador. Acarajé serves as both a religious offering to the gods in the Candomblé religion and as street food. The dish was brought by enslaved peoples from West Africa, and can still be found in various forms in Nigeria, Ghana, Togo, Benin, Mali, Gambia, Burkina Faso and Sierra Leone.

Samba-reggae is a music genre from Bahia, Brazil. Samba reggae, as its name suggests, was originally derived as a blend of Brazilian samba with Jamaican reggae as typified by Bob Marley. 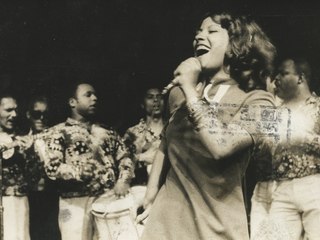 Clara Nunes was a Brazilian samba and MPB singer, considered one of the greatest of her generation. She was the first female singer in Brazil to sell over 100,000 copies of a record, with "Tristeza Pé No Chão" and her achievements in the samba genre earned her the title of "Queen of Samba".

Nei Braz Lopes is a singer, composer, lawyer, writer and historian, working primarily with the Brazilian genre of samba and African-Brazilian studies.

Raymundo Nonato Sodré, is a Brazilian musician known for working in rootsy styles of music outside of the mainstream. He was raised by his mother, filha-de-santo in a terreiro of candomblé Angola outside of Ipirá run by her mãe-de-santo sister. It was in this house of candomblé that Sodré learned to drum. He later learned to play guitar, taught at first by his mother.

The history of Afro-Brazilian people spans over five centuries of racial interaction between Africans imported, involved or descended from the effects of the Atlantic slave trade. 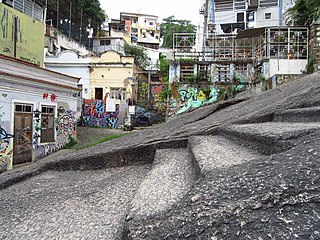 Pedra do Sal is a historic and religious site in Rio de Janeiro, in the neighborhood of Saúde. The site was originally a quilombo village. An association group still lives there, formally known as the Community Descendents of the Quilombos of Pedra do Sal. The site was recognised in 1984 by INEPAC, the Institute for State Cultural Heritage.

Cleusa da Conceição Nazaré de Oliveira, better known as Mãe Cleusa Millet or Mother Millet (1923–1998), was the hereditary spiritual leader (iyalorixá) of Brazil's most noted Candomblé temple, Terreiro do Gantois, located in Alto do Gantois in Salvador, Bahia, Brazil. Upon her death, she was accorded an official state day of mourning and was posthumously inducted into the Order of Merit of the State of Bahia. 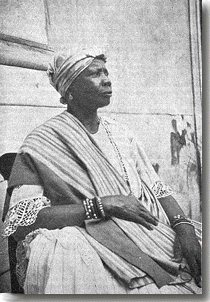 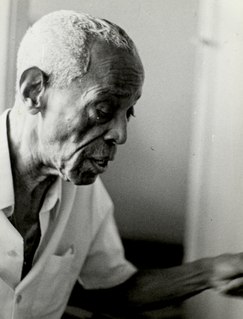 Ernesto Joaquim Maria dos Santos, most known as Donga, was a Brazilian guitarist and composer. He composed what is considered the first recorded samba, the 1916 song Pelo Telefone.