Shauntia Latrice "Tia" Norfleet (born May 1, 1986) is the first and only African American woman to hold a NASCAR driver’s license. The daughter of NASCAR driver Bobby Norfleet, she has completed 1 lap in a late model.

Born in Suffolk, Virginia in 1986, Norfleet's interest in racing began at age 7,[ citation needed ] when her father, NASCAR driver Bobby Norfleet, [1] doubled the battery power of a Hot Wheels Barbie car to increase its speed. [2] Norfleet claims her racing career began at age 14, when she began competing in kart racing events; [3] she went on to attempt a career in drag racing at the local and regional level.

Norfleet attended local late model events at tracks near her Augusta, Georgia home, [7] starting her Late Model career in 2004. [2] She claimed to begin competing in NASCAR national touring series competition starting in the summer of 2012, [4] and was operating a grassroots funding initiative, claiming it would finance her racing career; [8] [9] however she did not make it to the track in a major series in 2012.

In March 2013, a New York Times article reported that there were numerous inconsistencies in Norfleet's self-promotion efforts. They observe that she has only raced in one low level event, where she ran one lap before parking her car. She also has several criminal offenses on her record, and according to public records is actually 26 years old, not 24 as she has claimed; in addition, the NASCAR license that she has received was the first to be received by an African-American woman. After Norfleet publicly stated this, NASCAR's vice president for public affairs said, “I am uncomfortable with Tia representing herself in the way that she has.” [1] Norfleet responded that the accusations were "a biased, smear campaign". [10] Her father responded to the allegations by calling them a "witchhunt", by posting pictures of Tia's name on four separate licenses, although it's unclear why because she is the first African-American woman to retain such a license regardless of how many she has. He did stand by his daughter by refuting some of the allegations. [11] Tia confirmed that she did indeed have a criminal record, and that her only NASCAR event was indeed a "start and park", but also stated that she had never claimed to be a Nationwide Series driver even though she was shown with a NNS patch on her firesuit, which could be purchased from several different sources.

The entry-level NASCAR license Norfleet held does not require any vetting by a sanctioning body; it only requires an application and a fee. She has never held a license or been approved to compete in any professional NASCAR regional or touring series.

Norfleet supports the Safe Teen Georgia Driving Academy program, providing driving instruction at Atlanta Motor Speedway on behalf of the group; [5] in addition she is an ambassador for Safe America Driving. [12] 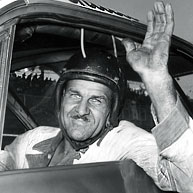 Danica Sue Patrick is an American former professional racing driver. She is the most successful woman in the history of American open-wheel car racing—her victory in the 2008 Indy Japan 300 is the only win by a woman in an IndyCar Series race.

Mara Reyes is a Mexican stock car racing driver. Finding some success in the NASCAR Mexico Series, she started one race in what is now the NASCAR Xfinity Series in 2005. Reyes currently races in the Super Copa Telcel with Arris Group sponsorship.

The Drive for Diversity (D4D) program is a development system instituted by the American auto racing league NASCAR. The program's purpose is to attract minority and female individuals to the sport, primarily as drivers, but also including ownership, sponsorship, and crew member roles, and to attract a more diverse audience to the sport. Before an applicant is accepted into the program, their resumes are checked by NASCAR officials. The system is similar to a driver development program where applicants progress through minor-league and regional racing levels to prepare them for a possible shot at one of NASCAR's three national series. The program was started during the 2004 season by NASCAR marketing executives in order to attract female and minority fans and drivers to the historically white and male-dominated sport. The year before, Joe Gibbs Racing, along with former athletes Reggie White and Magic Johnson, had started a similar program.

Tammy Jo Kirk is an American stock car racing and motorcycle racer. She was the first woman to race in the NASCAR Craftsman Truck Series and later returned to NASCAR to run the Busch Series. She has not driven in NASCAR since 2003.

Robert Norfleet is an American former professional racing driver. He has raced motorcycles, drag cars, and in stock car racing, which included attempts in the NASCAR Craftsman Truck Series and the ARCA Re/Max Series.

Milka Duno is a Venezuelan race car driver who competed in the IndyCar Series and ARCA Racing Series. She is best known for holding the record of highest finish for a female driver in the 24 Hours of Daytona. She entered the NASCAR Nationwide Series in 2014.

Leilani Maaja Münter is an American former professional stock car racing driver and environmental activist. She last competed in the ARCA Menards Series, and previously drove in the Firestone Indy Lights, the development league of IndyCar. She currently lives in Cornelius, North Carolina.

Chrissy Wallace is an American stock car racing driver. She is the daughter of NASCAR driver Mike Wallace, niece of Rusty Wallace and Kenny Wallace, cousin of Steve Wallace, and sister of Matt Wallace.

Maryeve Dufault is a Canadian professional racing driver, model, and advertising spokeswoman. She has raced in the Skip Barber, Formula BMW, Formula Renault, Star Mazda, NASCAR Canadian Tire Series, ARCA Racing Series and NASCAR Nationwide Series. As a model, she has appeared on numerous television series, most notably The Price is Right.

Paige Decker is an American professional stock car racing driver from Eagle River, Wisconsin. She has raced in the NASCAR Camping World Truck Series and Xfinity Series and was a 2014 NASCAR Drive for Diversity participant.

Toni Breidinger is an American professional stock car racing driver who competes full-time for Venturini Motorsports in the ARCA Menards Series, driving the No. 25 Toyota Camry.

Gracie Elizabeth Trotter is an American stock car racing driver. She competes part-time in the ARCA Menards Series, driving the Nos. 15 and 25 Toyota Camrys for Venturini Motorsports. Trotter also competes for Rev Racing in the NASCAR Advance Auto Parts Weekly Series as part of NASCAR's Drive for Diversity program. She is best known for becoming the first female driver to win an ARCA-sanctioned race, doing so in the ARCA Menards Series West for Bill McAnally Racing in 2020.

Hannah Newhouse is an American professional stock car racing driver and reporter. After driving for four years in what is now the ARCA Menards Series West, she is currently working as a pit reporter and analyst in NASCAR for Motor Racing Network and various other websites and racetracks.