The Lélé language, Lélémrin, also known as Tiagba(Tiagbamrin) after its principal town, is a Kru language spoken by ethnic Aizi(Ahizi) on the shores of Ébrié Lagoon in Ivory Coast. It is not intelligible with Mobu, also spoken by Aizi at the lagoon.

The Ébrié Lagoon lies in Ivory Coast, separated for almost all of its length from the Atlantic Ocean by a narrow coastal strip. The 100 km (60 mi) long lagoon is linked to the sea by the Vridi Canal, while the Comoë River flows into it. The lagoon averages 4 km in width, and 5 m (16 ft) in depth. Abidjan and towns such as Grand Bassam, Bingerville, Jacqueville, Attécoubé, and Tiagba lie on the lagoon.

The Mobu language, Mobumrin, is a Kru language spoken by ethnic Aizi(Ahizi) on the shores of Ébrié Lagoon in Ivory Coast. It is not intelligible with Lele (Tiagba), also spoken by Aizi at the lagoon.

Kasaï-Occidental was one of the eleven provinces of the Democratic Republic of the Congo between 1966 and 2015, when it was split into the Kasaï-Central and the Kasaï provinces.

The languages of Spain, or Spanish languages, are the languages spoken or once spoken in Spain. Romance languages are the most widely spoken in Spain; of which Spanish, or Castilian, is the only language which has official status for the whole country. Various other languages have co-official or recognised status in specific territories, and a number of unofficial languages and dialects are spoken in certain localities.

Lele is the name of at least six different languages:

Canadian French is the French language spoken in Canada. It includes the the varieties of French used in Canada such as Quebec French. Formerly Canadian French referred solely to Quebec French and the closely related varieties of Ontario (Franco-Ontarian) and Western Canada—in contrast with Acadian French, which is spoken in some areas of eastern Quebec, New Brunswick, and some areas of Nova Scotia. PEI and Newfoundland & Labrador have Newfoundland French.

The Tetovo dialect is a member of the western subgroup of the northern group of dialects of the Macedonian language. It is spoken by the population in north-western Republic of Macedonia. This dialect is spoken in the city of Tetovo, Brvenica and Jegunovce Municipality. One of the main characteristics of this dialect is the use of the words таќе (taḱe) – "on that way" and ваќе (vaḱe) – "on this way". The Tetovo dialect can be found in several books, two of which were written by Kiril Peychinovich, namely Ogledalo and Uteshenia greshnim.

The Malibu languages are a poorly attested group of extinct languages once spoken along the Magdalena River in Colombia. Material exists only for two of the numerous languages mentioned in the literature: Malibú and Mocana.

The Lele, also known as Bashilele or Usilele, are a subgroup of the Kuba people in the Democratic Republic of the Congo. They traditionally live in the Kasai River region, but since the 1950s many have migrated to Kinshasa. There are currently about 30,000 Lele, of which 26,000 speak the Lele language.

Dacica is a Latin work by Roman Emperor Trajan, written in the spirit of Julius Caesar's commentaries like De Bello Gallico, and describing Trajan's campaigns in Dacia.

Lele is an East Manus language of the Austronesian language family spoken in the northeastern part of Manus Island, New Guinea. It has an SVO word order.

Lele is a language spoken mainly in the west edge of the Kasai-Occidental Province, in Ilebo and Tshikapa territories; the extreme east of the Bandundu Province, in Idiofa and Gungu territories of the Democratic Republic of the Congo.

The Nomoi Islands, also known as Mortlock Islands, are a group of three large atolls in the state of Chuuk, Federated States of Micronesia. They are located about 250 kilometres to the southeast of Chuuk.

Apro, also known as Aproumu, is a language spoken by the Aizi people of Ébrié Lagoon in Ivory Coast. Once assumed to be a Kru language like the other two Aizi languages, subsequent investigation has shown it to be Kwa. 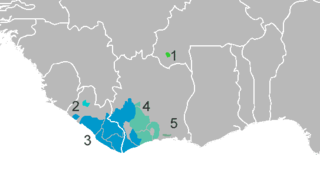 The Aizi are a sub-group of the Kru people. The Aizi inhabit the Ébrié Lagoon in the Ivory Coast. The Aizi languages include Tiagba, Mobu, and Apro.