Tiago André Barata Feio Peixoto Apolónia [3] (born 28 July 1986) is a Portuguese table tennis player for German club TTF LIEBHERR Ochsenhausen and Portugal. As of August 2016, he is ranked the number eighteenth player in the world. [2]

Born in Lisbon, Apolónia began playing table tennis aged six at his hometown club Estrela da Amadora. As a youth player, he was crowned European Junior Doubles champion in 2004 and won a silver medal in the Doubles competition at the Junior World Championships in 2003, both partnering Marcos Freitas. [4] After playing for German clubs TTC indeland Jülich, 1. FC Saarbrücken and TTF LIEBHERR Ochsenhausen, he arrived at his current club TTC Neu-Ulm in 2019. In 2006, he won his first ITTF Pro Tour Doubles title in São Paulo, partnering João Monteiro. His first ITTF Pro Tour Singles title followed in October 2010 with the Austrian Open in Wels, where he beat Germany's Timo Boll in the final. [5]

He qualified for the 2008 Summer Olympics in Beijing, where he competed in the Men's Singles.

In 2015 he won first place with his national team (João Geraldo and Marcos Freitas) in table tennis at the 2015 European Games in Baku.

Aleksandar Karakašević is a Serbian table tennis player. His powerful backhand has helped him win against some of the top players in the world. He won a bronze medal on 2011 European Championship. One of his greatest result achieved in USA is his victory at the US Open Championship, July 2007, where he established himself as a world class athlete, winning the tournament title for the 3rd time by defeating Kurashima Yosuke from Japan with the result of 4:0. In 2020 at the age of 45 he is still playing in German Bundesliga representing TTC ZUGBRÜCKE GRENZAU

Pär Håkan Gerell is a Swedish table tennis player. He has been playing for French club Chartres ASTT since 2010. Based on his June 2011 world ranking, Gerell qualified for the London 2012 Olympic Games. He also competed at the 2008 Summer Olympics.

Kalinikos Kreanga is a Greek table tennis player. Born as Călin Creangă, he chose to defect from Communist-ruled Romania at the age of 17 while he was participating in the European Table Tennis Youth Championships in Luxembourg in 1989.

Chen Pao-pei is a former table tennis player from Taiwan. She won several medals in singles, doubles, and team events in the Asian Table Tennis Championships in 1953 and 1957. 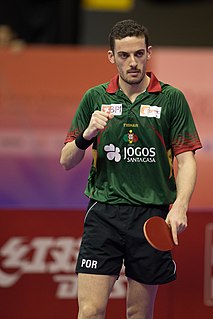 El-Sayed Lashin is an Egyptian table tennis player. His current club is Al Ahly in Cairo, where he resides. He qualified for his third Olympic Games at the All Africa Games held in September 2011 in Maputo, Mozambique.

Liam Pitchford is a British Table tennis player. As of October 2021, he is ranked the no. 14 player in the world. He is currently sponsored by Victas.

Zeina Shaban is a Jordanian table tennis player and a member of the Jordanian royal family. She is considered one of Jordan's most promising athletes for her excellence and outstanding achievement in sport. She competed at the ITTF World Junior Cup circuit and Liebherr World Championships, and achieved her sporting success by winning two silver medals from the Arab Cup. Shaban was also given an opportunity to qualify for two Olympic games by obtaining a scholarship from the Olympic Solidarity Fund. Shaban is right-handed and uses the shakehand grip with an attacking chopper. As of December 2008, she is ranked no. 278 in the world by the International Table Tennis Federation (ITTF). 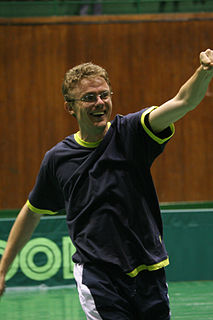 Dmitry Vyacheslavovich Mazunov is a Russian table tennis player. He won a bronze medal, along with his brother Andrey Mazunov, in the men's doubles at the 1991 World Table Tennis Championships in Chiba, Japan, representing the Soviet Union. As of January 2010, Mazunov is ranked no. 105 in the world by the International Table Tennis Federation (ITTF). Mazunov is a member of TTF Liebherr Ochenhausen in Ochsenhausen, Germany, and is coached and trained by Mikhail Nosov. He is also right-handed, and uses the attacking grip.

Portugal competed at the 2016 Summer Olympics in Rio de Janeiro, Brazil, from 5 to 21 August 2016. Portuguese athletes had appeared in every edition of the Summer Olympic Games since the nation's debut in 1912.

Matilda Ekholm is a Swedish table tennis player. She has won four medals in European Table Tennis Championships. She won a bronze medal in women's doubles in 2013 paired with the Spanish player Galia Dvorak. She won another bronze medal in women's team in 2014 with the Swedish national team. She won her third medal, a silver, paired with Mattias Karlsson in mixed doubles in 2016. 4th medal was 2018 in doubles with Pota Georgina. She has also participated in women's singles at the 2016 Summer Olympics, finishing 17th.

The men's singles table tennis event was part of the table tennis programme at the 2016 Summer Olympics in Rio de Janeiro. The event took place from 6 August to 11 August 2016 at Riocentro.

The men's singles in table tennis at the 2015 European Games in Baku was the 1st edition of the event in a European Games It was at the Baku Crystal Hall from 16 to 19 June 2015.

The men's singles competition of the 2019 World Table Tennis Championships was held from 23 to 28 April 2019.