Tiago Coelho Andrade (born 5 May 1992), commonly known as Tiago Cametá is a Brazilian footballer who plays as a right back.

In order to gain more first team appearances, Cametá joined Série C (third tier) club Vila Nova on 27 August 2013, after agreeing to a season long loan deal. [4] After appearing 11 times for the club in the campaign, he moved to Fortaleza of the same tier on 21 December. [5] On 5 May 2014, he scored his first and only league goal in a 2–1 home victory against Cuiabá. [6]

On 8 January 2018, Cametá joined Avaí Futebol Clube on a one year loan deal. [9] However, he cut short his loan deal and instead joined Brasil de Pelotas on loan on 24 April. [10] 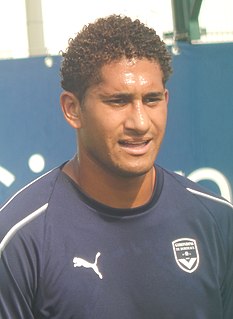 Pablo Nascimento Castro, simply known as Pablo, is Brazilian footballer who plays as a central defender for Bordeaux and the Brazil national team.

Rodinei Marcelo de Almeida, simply known as Rodinei, is a Brazilian footballer who plays as a right back for Internacional, on loan from Flamengo.

Severino de Ramos Clementino da Silva, known as Nino Paraíba or simply Nino, is a Brazilian footballer who plays for Bahia as a right back.

Givanildo José de Oliveira, known as Givanildo, is a Brazilian retired footballer who played as a defensive midfielder, and is unemployed so far

João Carlos Santos do Amaral known as Cacaio, is a Brazilian football manager and former Forward. is one of the best known former players and current head-coaches/managers in Brazil. having as footballer, acted clubs in Flamengo, Itaperuna, Bangu and Santa Cruz. But it was by Paysandu in that if more stressed the lead-lot for the first time in Campeonato Brasileiro Série A, with the conquest of the Série B and being gunner this edition. then migrated to the arquirrival Rowing and also served by Guarani, Remo, Criciúma, Sion and even by Ponte Preta, Vila Nova and acting by Brasil de Pelotas and Pelotas.

Romário Guilherme dos Santos, simply known as Romário, is a Brazilian footballer who plays for Cuiabá on loan from Santos as a left back.

The following article presents a summary of the 2017 football (soccer) season in Brazil, which was the 116th season of competitive football in the country.

The 2018 Campeonato Brasileiro Série B was a football competition held in Brazil, equivalent to the second division.

Diego Jussani is a Brazilian footballer who plays for Vila Nova as a defender.

The 2019 season was the 105th in Sociedade Esportiva Palmeiras existence. This season Palmeiras participated in the Campeonato Paulista, Copa Libertadores, Copa do Brasil and the Série A.

The 2019 season was the 109th season in the history of Sport Club Corinthians Paulista.

The 2019 season was São Paulo's 90th year since the club's existence. Celebrating 9 decades of history, The Dearest has taken a place at a Campeonato Paulista finals after 16 years of tries, against the same rival of 2003 finals, Corinthians, but for the Tricolor Paulista a bad result happened again. São Paulo FC fatally fell in front of Corinthians in the last minute of second half in second match, by a result of 1–2 (Away) after 0–0 in Home. In other championships, São Paulo hadn't similar performance being prematurely eliminated in Copa do Brasil by Bahia by two losses and the painful defeat in the history of Copa Libertadores, in preliminary round by the Argentine club Talleres. Following an unsuccessful season, the only and last "hopeness" for the paulistas has turned into the national league, Série A. The Tricolor kept a regular position in the table between the 4th place and 8th place however constantly changing the head coaches. In overall were four managers, André Jardine, Vagner Mancini, Cuca and Fernando Diniz in the entire year of 2019. Finishing the performance of the season, the club has taken a place in the group stage of Copa Libertadores in 2020, keeping the dream of new international trophies in the next year.

The 2020 Campeonato Brasileiro Série B is a football competition held in Brazil, equivalent to the second division. The competition was originally scheduled to begin on 2 May and end on 28 November, however due to COVID-19 pandemic the tournament was rescheduled for 7 August 2020–30 January 2021.

The 2020 season is Santos Futebol Clube's one hundred and eighth season in existence and the club's sixty-first consecutive season in the top flight of Brazilian football. As well as the Campeonato Brasileiro, the club competes in the Copa do Brasil, the Campeonato Paulista and also in Copa Libertadores.