Tiago Henrique de Oliveira Camilo (born May 24, 1982) is a judoka from Brazil, who won the silver medal in the lightweight (−73 kg) division at the 2000 Summer Olympics. He also won a gold medal at the 2007 World Judo Championships, and was the third Brazilian to become a world champion in judo, after João Derly and Luciano Correa. At the 2008 Summer Olympics he won a bronze medal in the −81 kg category. At the 2012 Olympic Games, he lost the bronze medal match to Ilias Iliadis in the −90 kg weight division. [2] [3] 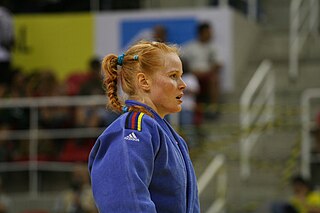 Annett Böhm is a German Judoka.

Leandro Marques Guilheiro is a Brazilian male judoka. He won the bronze medal in the lightweight (<73 kg) division at the 2004 Summer Olympics in Athens, Greece and at the 2008 Summer Olympics in Beijing. He became the first Brazilian judoka to win medals at two consecutive Olympic Games. Guilheiro plays a classical style of judo fighting in an upright stance and using techniques such as uchi mata, ippon seoi nage, morate seoi nage and o soto gari. He has done modeling work in Brazil.

Ole Bischof is a German judoka. He is trained by 1984 Olympic gold medalist Frank Wieneke.

Teddy Pierre-Marie Riner is a French judoka. He has won ten World Championships gold medals, the first and only judoka to do so, and three Olympic gold medals. He has also won five gold medals at the European Championships. He was a member of the Levallois Sporting Club before joining Paris Saint-Germain in August 2017.

Nourredine Yagoubi is an Algerian judoka.

The 2007 World Judo Championships are the 25th edition of the Judo World Championships, and were held at the Rio Olympic Arena, usually called Arena Multiuso, that was built for the 2007 Pan-American Games, in Jacarepaguá, Rio de Janeiro, Brazil from September 13 to September 16, 2007. 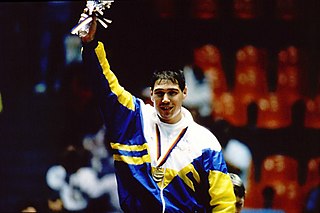 Yalennis Castillo Ramírez is a Cuban judoka. She was born in Moa, Holguín, Cuba on May 21, 1986. She practiced judo since she was a child.

João Gonçalves Filho was a Brazilian sportsman. He competed in five Olympic Games in both swimming and water polo. Born in Rio Claro, São Paulo, he represented Brazil in swimming at the 1952 and 1956 Olympics and in water polo at the 1960, 1964, and 1968 Olympics.

Mayra Aguiar da Silva is a Brazilian judoka. She was a bronze medallist in three consecutive Olympics, 2012, 2016 and 2020. She is also two-time world champion. She is the first Brazilian woman to win three Olympic medals in an individual sport.

Travis Stevens is an American judoka and Brazilian jiu-jitsu practitioner who competed in the 2008, 2012, and 2016 Summer Olympics. He competes in the men's half-middleweight (−81 kg) division. On August 9, 2016, Stevens became the third American male judoka to win a silver medal in the Olympics. 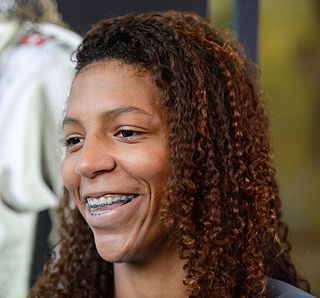 Rafaela Lopes Silva is a Brazilian judoka. She won a gold medal at the 2013 World Judo Championships and at the 2016 Summer Olympics in the –57 kg weight division. Currently, she occupies the graduation third sergeant in the Navy of Brazil and integrates the Center of Physical Education Admiral Nunes (CEFAN), the Military Sports Department. 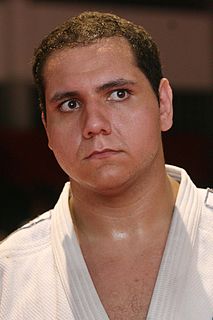 Rafael Carlos da Silva is a Brazilian heavyweight judoka. He became Brazil's first Olympic medalist in the judo heavyweight division (>100 kg), winning a bronze medal in 2012. Silva won the Pan American Judo Championships in 2012–2014 and 2016, and qualified for the 2016 Olympics.

Esther San Miguel Busto is a Spanish judoka. She has won six national titles and two European titles for the half-heavyweight division (78 kg). She is also a bronze medalist at the 2003 World Judo Championships in Osaka, Japan, and has captured a total of twenty-seven World Cup medals, including eight golds. San Miguel is a member of Centro de Alto Rendimiento Madrid Judo Club, and is coached by Sacramento Moyano.

Hamed Malekmohammadi Memar is an Iranian former judoka, who played for both the lightweight and half-middleweight categories. He won the silver medal for the men's 81 kg class at the 2008 Asian Judo Championships in Jeju City, South Korea, losing out to South Korea's Kim Jae-Bum.

Shah Hussain Shah is a Pakistani judoka. Shah competes in the men's -100 kg division. As of July 2014, he is based in Japan. Shah Hussain received the honour to bear Pakistan flag at Rio Olympics. Shah represented Pakistan in 2018 Asian Games where he won a bronze medal in -100Kg division.

Baruch Shmailov is an Israeli judoka. He competes in the under 66 kg weight category, and won a silver medal in the 2018 World Masters in Guangzhou. Shmailov won a bronze in the 2017 World Masters, and in 2018 Düsseldorf Grand Slam. In March 2018 he was ranked #5 in the world in the U66 kg division. He competed for Israel at the 2020 Summer Olympics.