The story follows the life of unconventional hero Santiago Ronquillo. Tiago is a streetwise orphan who, after acquiring the amulet known as the Pangil ng Kidlat ("Fang of Lightning"), gains superhuman strength, speed and the ability to climb high walls that enhances his parkour abilities. He then uses his gift to steal from the corrupt to help the poor. [4]

After many years, Tiago (Gerald Anderson) meets Cornelia (Erich Gonzales) and gets a chance to profess his love for her. Cornelia's suitor Vincent becomes jealous of Tiago. Meanwhile, Cornelia's father Mayor Mariano is against his daughter's relationship with the impoverished Tiago. Cornelia decides to elope with Tiago and they plan to get married. One night, Cornelia tells Tiago that her father wants to meet him. Tiago goes to Mayor Mariano's house where he found him bloody and unconscious. Vincent arrives and tells the guards to arrest Tiago. After killing Mayor Mariano, Vincent frames Tiago for the murder. The court finds Tiago guilty and sentences him to life imprisonment. In jail, Tiago befriends Big Max, Nardo, and Pablo. After learning that Cornelia had married Vincent, Tiago makes several attempts to escape but miserably fails. Years pass and Tiago discovers that the urban legend about the amulet called Pangil ng Kidlat is true when he meets Castro, the owner of the amulet.

Castro gives his amulet to Tiago, and before dying, he asks the young man to use the amulet to prove his innocence. Tiago, together with his newfound friends inside the prison, then successfully escape. Tiago intends to force Vincent to admit the truth. Cornelia hears from Vincent that he did murder Mayor Mariano, Cornelia's father. Tiago and Vincent struggle for the gun, and they accidentally shoot Cornelia. Before dying, Cornelia tells Tiago that she loves him, and that they have a son named Martin. Vincent tells the police and Martin that it was Tiago who killed Cornelia. With the help of his fellow fugitive, Tiago takes his son from Vincent. Nardo goes to the house of his sister Norma, and there Tiago tries to convince his son that he is a good man. Norma is worried that Tiago will only bring trouble, but she eventually understands his desire to win his son. She befriends Martin and helps the boy trust his own father. Tiago lets Martin hear the voice recording wherein Vincent admitted it was he who murdered Mayor Mariano.

Vincent asks Red's help in finding Tiago and getting Martin, and Red promises to use his influence. Meanwhile, Tiago and his friends decide to help their poor neighbors by stealing from the wealthy and the corrupt. Just then, Red chases Tiago and shoots Tiago at the back hitting his heart but he survived because of his amulet, his fellow members learn about this, they ask Tiago and Tiago admits that it's because of his Agimat. Max then tells Pablo to steal the amulet but he gets caught by Tiago while they were asleep, then Max shoots Pablo dead. Vincent finally surrenders and gives back Martin to Tiago, as Police arrest Vincent, Max shows up and fires at Vincent. Tiago now was revealed to be innocent, he marries Norma and they celebrate. Max then burns down a house, causing the people to panic and tries to put out the fire. They then search for Martin, Martin then was abducted by Max, Tiago chases after him and he finds him cornered in the warehouse. Max convinces Tiago to give him the amulet and he will give Martin to him. Tiago then surrenders his amulet then Martin struggles and runs to Tiago's side, Tiago passes his amulet to Martin then Max shoots Tiago and they shoot each other. Martin then returns to see Tiago lying dead.

Jose Acuña Bautista Sr., professionally known as Ramon Revilla Sr. or simply Ramon Revilla, was a Filipino actor who served as Senator of the Republic of the Philippines.

Agimat, also known as anting or anting-anting, is a Filipino word for "amulet" or "charm". Anting-anting is also a Filipino system of magic and sorcery with special use of the above-mentioned talismans, amulets, and charms. Other general terms for agimat include bertud and galing.

Rafael Aranda Roco, Jr. is a Filipino actor whose work ranges from films to television. He is famous for his critically acclaimed role as Julio Madiaga in Maynila: Sa mga Kuko ng Liwanag. Though he acts in his country's films, he also had an important role in the 1982 Australian-U.S. film The Year of Living Dangerously. He also portrayed bald villain roles in Philippine action movies as well as various supporting roles. Bem starred in Sine Novela: Tinik sa Dibdib.

Juan Miguel Macapagal Arroyo, better known as Mikey Arroyo, is a Filipino actor and politician who currently serves as the representative from the second district of Pampanga. He is the son of former Philippine President Gloria Macapagal-Arroyo.

Carlo "Carl" Guevara is a Filipino actor and model. Guevara started his career when he and his brother Paolo joined the Be Bench / The Model Search where he won along with Regine Angeles. 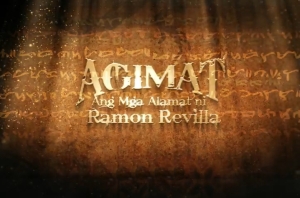 ABS-CBN presents Agimat: Ang Mga Alamat ni Ramon Revilla is a series based on the movies of Ramon Revilla Sr. of the 1990s and 2000s, which features the Filipino cultural belief in the powers of an agimat or amulet. The milieu of the characters and stories are primarily set in Cavite province where the belief in amulets remains strong to this day. 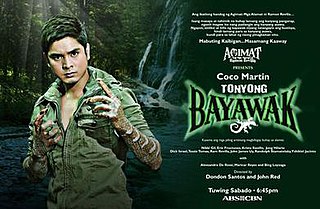 The following is a list of events affecting Philippine television in 2011. Events listed include television show debuts, finales, cancellations, and channel launches, closures and rebrandings, as well as information about controversies and carriage disputes.

Mariano de Leon, known by his stage name Julio Diaz, is a Filipino film and television actor in the Philippines. Diaz is of Filipino Mexican background. He received the Best Actor Gawad Urian Award nomination for his performance in Takaw Tukso (1986).

Cine Mo! is a Philippine pay television channel created by ABS-CBN Corporation and one of the freemium channels of ABS-CBN TVplus. The programming consists of local films and foreign movies.

Alyas Pusa: Ang Taong May 13 Buhay is a 1988 Filipino action film directed by Pablo Santiago and starring Ramon Revilla, Alona Alegre, Angela Perez, Paquito Diaz, and Fred Moro. It employs Revilla's usual formula of having his character own a protective amulet in battle. Produced by Urban Films, the film was released on April 13, 1988. Alyas Pusa was given a positive review by critic Lav Diaz, who praised its neutral depiction of ideological conflicts between communist rebels and anti-communist soldiers, though he doubted the believability of the film's premise.