Tiamzon is a surname. It may refer to: 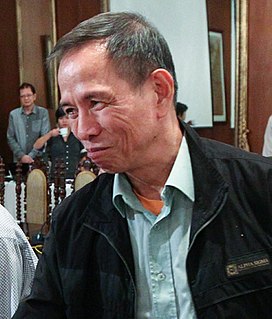 Benito Tiamzon is a Filipino political organizer and until his arrest in March 2014 by Philippine security forces, was believed to be the Chairman of the Communist Party of the Philippines (CPP) and its armed wing, the New People's Army (NPA).

Wilma Tiamzon is a Filipino political organizer and until her arrest in March 2014 by Philippine security forces, believed to be the Secretary-General of the Communist Party of the Philippines (CPP) and its armed wing, the New People's Army (NPA).

Blas Fajardo Ople was a Filipino journalist and politician who held several high-ranking positions in the executive and legislative branches of the Philippine government, including as Senate President from 1999 to 2000, and as Secretary of Foreign Affairs from 2002 until his death. Perceived as a leftist-nationalist at the onset of his career in public service, Ople was, in his final years, a vocal supporter for allowing a limited United States military presence in the Philippines, and for American initiatives in the War on Terror including the 2003 U.S. invasion of Iraq.

The International Action Center (IAC) is an activist group founded in 1992 by former United States Attorney General Ramsey Clark. It supports anti-imperialist movements around the world, and opposes U.S. military intervention in all circumstances.

The New People's Army (NPA) is the armed wing of the Communist Party of the Philippines (CPP). It was formed and founded by Jose Maria Sison and Lucio Manlapaz on 29 March 1969. The Maoist NPA conducts its armed guerrilla struggle based on the strategical line of protracted people's war. With an estimated strength of nearly 3,200 militants in 2015, and latest attack as recent as 2015 in Agusan Del Sur, it operates in the rural areas throughout Philippines especially in the inaccessible hill areas of provinces far from the major cities.

Rubén Deloso Torres is a politician in the Philippines. He goes by the nom de guerre "Kadre" which he was known as a leftist during martial law.

Bayan Muna is a member of Makabayan, a leftist political party in the Philippines. The motto of the party is "New Politics, the Politics of Change", against "traditional, elitist, pro-imperialist politics". Its platform includes the advocation of a government that progressively supports the working class, with meaningful representation of all democratic sectors in the Philippines. Bayan Muna was the second most popular party-list party in the 2007 Philippine elections. In 2009, Bayan Muna Representative Satur Ocampo and former Bayan Muna and incumbent Gabriela Representative Liza Maza ran for senate seats as guest candidates under the ticket of billionaire real estate magnate Senator Manny Villar, Ocampo said that their common objective “is to emancipate the people from widespread poverty and social injustice."

The National Democratic Front of the Philippines (NDFP) is a coalition of revolutionary social and economic justice organizations, agricultural unions, trade unions, indigenous rights groups, leftist political parties, and other related groups in the Philippines. It belongs to the much broader National Democracy Movement and the CPP-NPA-NDF insurgency. 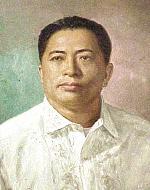 Alejo Santos Santos was a Filipino soldier and World War II hero who parlayed his fame into a political career. His prestige was somewhat marred in later life when he agreed to run as the only major candidate opposing Ferdinand Marcos in the widely suspect 1981 Philippine presidential election.

A Barangay Kagawad, abbreviated as Kgwd., known in English as a Barangay Councilor and in Filipino as a konsehal ng barangay, is an elected government official who is a member of the Sangguniang Barangay, or Barangay Council, of a particular barangay. The barangay is the smallest political unit in the Philippines and the council serves as the legislature of the barangay and is headed by the barangay captain or Punong Barangay.

David Gilbert may refer to:

The Dominican College of Tarlac is a Catholic school founded by the Fr. Mariano Sablay in 1947. It was established as San Nicolas Academy with only 35 students.

The Elections for the House of Representatives of the Philippines were held on April 23, 1946. Held on the same day as the presidential election, it was held after the Nacionalista Party had split permanently into two factions: the "Conservative" faction headed by president Sergio Osmeña and the "Liberal" faction headed by Senate president Manuel Roxas, which later became the Liberal Party. Roxas and the Liberals won the elections, leaving the Nacionalistas with the minority in both houses of Congress.

The Workers National Democratic Party (WDP) is a workers' political party in Egypt formed shortly after the Egyptian Revolution of 2011. It is backed by the Federation of Egyptian Trade Unions and forms part of the Coalition of Socialist Forces. The party name is sometimes translated in English as Democratic Workers Party, Democratic Labour Party or Labour Democratic Party.

Nilo Tayag is a Filipino bishop of the Philippine Independent Church. He co-founded, along with Jose Maria Sison and others, the Maoist youth group Kabataang Makabayan in the 1960s. He was the group's secretary-general and national chairman until he was arrested on June 12, 1970 in San Pablo, Laguna. Detained along with Benito Tiamzon, Jesus Lava and other left-wing personalities at the Youth Rehabilitation Center in Fort Bonifacio, he was released in 1981 or 1982 after pleading guilty to the charge of subversion.

The Partido Obrero de Filipinas was a Marxist political party formed in 1924 by Filipino labor organizers Crisanto Evangelista, Domingo Ponce and Cirilo Bognot during the administration of the Insular Government of the Philippine Islands. This party later formed the core of the Partido Komunista ng Pilipinas which was established in 1930.

The Congress of Labor Organizations (CLO) was a trade union federation in the Philippines. It was formed in 1945 by Hukbalahap guerillas who had been members of the Collective Labor Movement. Its first president was Cipriano Cid of the Philippine Trade Union Council. The CLO controlled labor unions in all major industries in Panay and Manila, representing a significant percentage of the organized labor force therein and was the dominant labor federation of the period immediately after World War II.