Tian Bu was born in 785, during the reign of Emperor Dezong. He was the third son of the Weibo Circuit officer Tian Xing, although it is not known whether he was older or younger than his two brothers who were known to history, Tian Qun (田群) and Tian Mou (田牟). When he was young, his father Tian Xing served as the defender of Linqing (臨清, in modern Xingtai, Hebei) under then-military governor ( Jiedushi ) of Weibo, Tian Ji'an, who was ruling Weibo in a de facto independent manner from the imperial government. It was said that despite Tian Bu's youth, he was able to see that Tian Ji'an's position was not secure and counseled his father to eventually declare loyalty to the imperial government. [2]

In 812, after Tian Ji'an died, his young son Tian Huaijian initially became nominal ruler of Weibo, without imperial sanction, but soon, the soldiers mutinied and supported Tian Xing as their leader. [3] Tian Xing subsequently submitted to imperial orders and was made the military governor of Weibo and was subsequently renamed Tian Hongzheng by then-ruling Emperor Xianzong. [4] Tian Bu served under his father and commanded the elite troops of Weibo. [2]

In 815, when imperial troops were in the middle of a campaign against the warlord Wu Yuanji, who controlled Zhangyi Circuit (彰義, headquartered in modern Zhumadian, Henan), Tian Hongzheng sent Tian Xing to aid the campaign, commanding 3,000 soldiers. [4] It was said that Tian Bu contributed to victories in 18 battles. [2] In particular, in 817, when the chancellor Pei Du was at the front to oversee the operation, there was an occasion when Pei was reviewing the building of a fort at Tuokou (沱口, in modern Luohe, Henan), when the Zhangyi officer Dong Chongzhi (董重質) made a surprise attack on Pei's location, nearly reaching Pei. It was due to the efforts of Tian Bu and Li Guangyan that Pei was able to flee, and it was said that, after Tian cut off the Zhangyi soldiers' escape route, the Zhangyi soldiers fell into a ditch and suffered more than 1,000 casualties as a result. [5] After the Zhangyi campaign ended in victory later in the year, Tian Bu was made a general of the imperial guards. In 818, when his mother died, he left governmental service to observe a mourning period for her, but was soon recalled to again serve as general of the imperial guards. [2]

However, Emperor Muzong's transfers backfired, to Tian Hongzheng's detriment, as the Chengde soldiers resented him for the previous warfare between Weibo and Chengde. In fall 821, Chengde soldiers led by Wang Tingcou mutinied and killed Tian Hongzheng and his staff members. Li Su, as Tian Hongzheng's successor, mourned Tian Hongzheng and planned to lead the Weibo soldiers in a campaign to avenge Tian Hongzheng, but fell ill and could not do so. Emperor Muzong thus recalled Tian Bu, who was then observing a mourning period for Tian Hongzheng, to serve as the military governor of Weibo. Tian Bu declined several times, but the imperial government insisted. Tian Bu bid farewell to his wife, children, and household guests, stating, "I will not come back!" He reported to Weibo without the customary fanfare with banners and guards, and while he was still some 30 li (roughly 15 kilometers) away from Weibo's capital Wei Prefecture (魏州), he changed into mourning clothes and entered the city in tears. He sold ancestral properties and distributed the proceeds to the soldiers, while turning down his own salary. He also respected the senior officers as if they were his older brothers. [7]

In winter 821, Tian Bu launched his 30,000 troops to attack Wang, capturing two Chengde outposts just south of Nangong (南宮, in modern Xingtai). However, as recounted in a petition from Bai Juyi to Emperor Muzong at the time, he then became bogged down because his soldiers, who had been accustomed to rich rewards from the imperial government, lost their motivation. Meanwhile, as there were heavy snowstorms at the time, the supplies to be shipped by the imperial government's director of finances were not arriving, and Tian ordered that revenues be diverted from the six Weibo prefectures for military use — causing the officers to resent him for stripping the six prefectures of their wealth. The ambitious officer Shi Xiancheng thus used this opportunity to foster dissent in the Weibo ranks. In spring 822, when there was an imperial order for some Weibo soldiers to report to the camp of Li Guangyan the military governor of Zhongwu Circuit (忠武, headquartered in modern Xuchang, Henan) to attack Chengde from the east, the Weibo soldiers largely deserted Tian and fled to Shi's camp. Tian was only able to maintain control over 8,000 soldiers and was forced to return to Wei Prefecture. [7]

Once Tian returned to Wei Prefecture, he again discussed with his senior officers about launching another campaign against Chengde. The officers refused to follow his orders and stated that they would only follow him if he agreed to reassert independence from the imperial government. He saw the hopelessness of the situation he was in, and he wrote a final petition to Emperor Muzong and entrusting it to his staff member Li Shi (who would eventually be chancellor), stating: [7]

I, your subject, see that my people's desire are to turn against the grace of the state. Since your subject did not achieve anything, how can I forget my responsibility to die? I lie prostrate and beg Your Imperial Majesty to do everything possible to rescue Li Guangyan and Niu Yuanyi [(牛元翼, a Chengde officer who had refused to follow Wang and whom Wang was sieging)]. Otherwise, the righteous and the faithful subjects will soon be all slaughtered by the Heshuo [(河朔, i.e., the region north of the Yellow River)] rebels.

Tian then drew his sword and pierced his heart with it. After Shi heard of this news, he returned to Wei Prefecture with the troops, and they supported him to succeed Tian. Emperor Muzong mourned Tian and gave him posthumous honors but allowed Shi to take over Weibo. He also gave Tian Bu the posthumous name of Xiao (孝, "filial"). Later, during the reign of Emperor Muzong's brother Emperor Xuānzong, Tian Bu's son Tian Hui (田鐬), then serving as a prefectural prefect, was accused of corruption and sentenced to death, but the chancellor Cui Xuan pointed out Tian Bu's death for the state and begged for forgiveness for Tian Hui, and so Tian Hui was only demoted. [8] 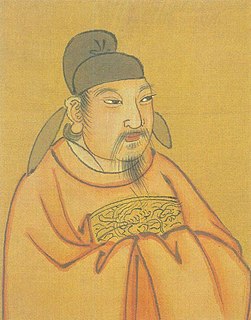 Emperor Xianzong of Tang, personal name Li Chun, né Li Chun (李淳), was an emperor of the Chinese Tang Dynasty. He was the eldest son of Emperor Shunzong, who reigned for less than a year in 805 and who yielded the throne to him late that year. 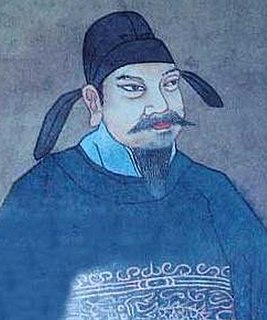 Li Su (李愬) (773–821), courtesy name Yuanzhi (元直), formally Duke Wu of Liang (涼武公), was a Chinese military general and politician during the Tang Dynasty. He was most well—known for his surprise attack on Cai Prefecture, then held by the warlord Wu Yuanji, successfully capturing Wu.

Tian Hongzheng (田弘正), né Tian Xing (田興), courtesy name Andao (安道), formally Duke Zhongmin of Yi (沂忠愍公), was a Chinese military general and politician of the Tang Dynasty. Under his governance, Weibo Circuit, which had not been under actual imperial control for decades, submitted to imperial control, but he was killed by mutineers while later serving as military governor (Jiedushi) of Chengde Circuit.

Wang Chengzong was a general of the Chinese Tang Dynasty who served a military governor (Jiedushi) of Chengde Circuit. He, like his grandfather Wang Wujun and father Wang Shizhen before him, ruled the circuit in a de facto independent manner from the imperial government, drawing two imperial campaigns against him, both of which he withstood. After the defeat of his ally Wu Yuanji in 817, he submitted to imperial authority, and, after his death, his brother Wang Chengyuan left the circuit, ending his family's hold on Chengde.

Li Shidao was a Chinese military general and politician of the medieval Chinese Tang dynasty, who, as the successor to his brother Li Shigu, ruled Pinglu Circuit in a de facto independent manner from the imperial government. In 818, after he reneged on an offer to submit three of Pinglu's 12 prefectures to imperial control, Emperor Xianzong declared a campaign against him. In 819, his officer Liu Wu turned against him and killed him, submitting to imperial authority.

Li Guangyan (李光顏) (761–826), courtesy name Guangyuan (光遠), né Ädiz Guangyan (阿跌光顏), was a Chinese military general and politician of the Tang Dynasty. He was known for his participation in various campaigns against regional warlords during the reigns of Emperor Xianzong and Emperor Muzong.

Li Jiang (李絳), courtesy name Shenzhi (深之), formally Duke Zhen of Zhao Commandery (趙郡貞公), was an official of the Chinese dynasty Tang Dynasty, serving as a chancellor during the reign of Emperor Xianzong.

Han Hong, formally Duke Yin of Xu (許隱公), was a general of the Tang dynasty of China, who also served as a chancellor during the reigns of Emperor Xianzong and Emperor Xianzong's son Emperor Muzong.

Wang Tingcou, formally the Duke of Taiyuan (太原公), was a general of the Chinese dynasty Tang Dynasty who, in 821, during the reign of Emperor Muzong, took over control of Chengde Circuit and thereafter ruled it in a de facto independent manner from the imperial government. He was said to be particularly cruel even for a warlord. After his death, his family held onto control of the circuit, even after the end of Tang Dynasty, until his great-great-grandson Wang Rong was overthrown in 921 – 100 years after Wang Tingcou had initially taken over the circuit.

Wang Chengyuan, formally the Duke of Qi (岐公), was a Chinese military general and politician during the Tang dynasty. His family had, for generations, controlled Chengde Circuit, but he declined the command of Chengde after the death of his older brother Wang Chengzong. He subsequently served as a general under imperial command until his death.

Shi Xiancheng was a general of the Chinese dynasty Tang Dynasty, who ruled Weibo Circuit semi-independently from the imperial government.

Liu Wu, formally the Prince of Pengcheng (彭城王), was a Chinese military general, monarch, and politician during the Tang Dynasty, whose killing of his superior, the warlord Li Shidao, and subsequent submission to the imperial government, were the high point of Emperor Xianzong's campaign to end warlordism. During the subsequent reign of Emperor Muzong, however, Liu, angered by a conspiracy between an imperial eunuch and one of his subordinates, drifted away from the imperial government and ruled Zhaoyi Circuit semi-independently.

Xue Ping (薛平), courtesy name Tantu (坦途), formally the Duke of Han (韓公), was a general of the Chinese Tang Dynasty, whose father Xue Song ruled Zhaoyi Circuit semi-independently from the imperial government. After Xue Song's death, Xue Ping declined the soldiers' request for him to take over Zhaoyi Circuit and fled to imperial territory. Subsequently, he had a long career as a general of the imperial armies.

Wang Zhixing, courtesy name Kuangjian and formally the Prince of Yanmen, was a general of the Chinese dynasty Tang Dynasty. He had long served as an officer at Wuning Circuit before seizing control of the circuit from the imperially-commissioned military governor (Jiedushi) Cui Qun, but subsequently often contributed to imperial campaigns against other generals.

He Jintao was a general of the Chinese dynasty Tang Dynasty, who, as military governor (Jiedushi) of Weibo Circuit, ruled the circuit in de facto independence from the imperial government.

He Hongjing (806?/807?-865?/866?), né He Chongshun (何重順), formally the Duke of Chu (楚公), was a general of the Chinese Tang Dynasty, who ruled Weibo Circuit as its military governor (Jiedushi) in de facto independence from the imperial government.