Last updated May 18, 2021
For other uses, see Tianji (disambiguation).

Tian Ji (Chinese :田忌; pinyin :Tián Jì), courtesy name Qi (齐), was a military general of the Qi state during the early Warring States period (4th century BC) of Chinese history. Tian Ji met Sun Bin and recommended him to King Wei of Qi as a military strategist. Tian Ji commanded the Qi armies in the Battle of Guiling and Battle of Maling, scoring victories against the Wei state with help and guidance from Sun Bin.

Tian Ji was descended from an aristocratic clan based in the State of Qi and was later appointed a military general by King Wei of Qi. In 340 BC, Sun Bin arrived in the State of Qi as a refugee from the State of Wei. Tian Ji met Sun Bin and was so impressed with Sun's expertise in military strategy that he kept Sun at his residence as a retainer (门客). Once, Tian Ji was invited to participate in a horse-racing event hosted by the king and Sun Bin proposed a strategy for Tian Ji to win. Tian used his inferior horse to race with the king's best horse, his average horse to race with the king's inferior horse, and his best horse to race with the king's average horse, winning the latter two out of the three races. The king was impressed by Tian Ji's victory and Tian told the king that he won the race after following Sun Bin's suggestion. Tian recommended Sun Bin to the king and the king appointed Sun as a military strategist and advisor.

In 354 BC, Wei attacked the State of Zhao, with Pang Juan leading the Wei forces. Zhao requested help from Qi whereupon King Wei of Qi ordered Tian Ji and Sun Bin to lead an army to reinforce Zhao. Sun Bin proposed the strategy of "Besieging Wei to rescue Zhao", and Tian Ji followed the plan, ordering an attack on Wei, forcing Pang Juan to turn back to save Wei, and effectively lifting the siege on Zhao. In 341 BC, Wei attacked the State of Han with Pang Juan commanding the Wei army. Han was an ally of Qi such that Qi responded by sending an army to reinforce Han. Sun Bin was appointed as commander-in-chief of the Qi army this time, with Tian Ji as his deputy. The Qi army scored a major victory in the ensuing Battle of Maling in 342 BC, which culminated in a crushing defeat for Wei and the death of Pang Juan.

Tian Ji was not on good terms with the Qi chancellor Zou Ji who disparaged Tian in front of King Wei. Unable to clear his name, Tian fled from Qi and sought refuge in the State of Chu. He was invited back to Qi and reinstated in his former office after King Xuan ascended the throne of Qi. 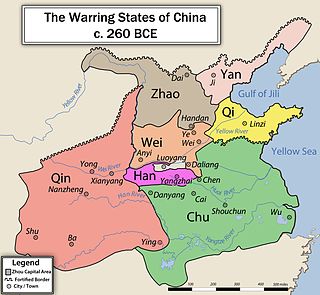 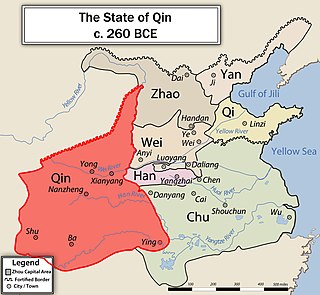 Qin was an ancient Chinese state during the Zhou dynasty. Traditionally dated to 897 BC, it took its origin in a reconquest of western lands previously lost to the Rong; its position at the western edge of Chinese civilization permitted expansion and development that was unavailable to its rivals in the North China Plain. Following extensive "Legalist" reform in the 3rd century BC, Qin emerged as one of the dominant powers of the Seven Warring States and unified the seven states of China in 221 BC under Qin Shi Huang. The Qin dynasty it established was short-lived but greatly influenced later Chinese history. 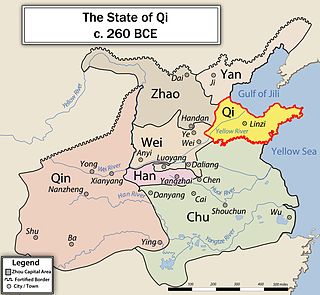 Qi was a state of the Zhou dynasty-era in ancient China, variously reckoned as a march, duchy, and independent kingdom. Its capital was Yingqiu, located within present-day Linzi in Shandong.

The Chu–Han Contention was an interregnum period between the Qin and Han dynasties in ancient China. After the Qin dynasty was overthrown by rebel forces in 206 BC, the former Qin Empire was split into the Eighteen Kingdoms, which were ruled by the rebel leaders and surrendered Qin generals. A civil war soon broke out, most prominently between two major contending powers – Xiang Yu's Western Chu and Liu Bang's Han. Some of the other kingdoms also waged war among themselves but these battles were largely insignificant compared to the main conflict between Chu and Han. The war ended in 202 BC with a total Han victory at the Battle of Gaixia, where Xiang Yu was killed. Liu Bang subsequently proclaimed himself emperor and established the Han dynasty as the ruling dynasty of China.

Zhang Han was a military general of the Qin dynasty. When uprisings erupted throughout China during the reign of Qin Er Shi, Zhang Han led the Qin armies and successfully quelled several of these rebel forces. In 207 BC, Zhang Han was defeated by Xiang Yu of Chu at the Battle of Julu, after which he surrendered along with his 200,000 troops. He was conferred the title "King of Yong" (雍王) by Xiang Yu and given part of the lands in Guanzhong as his fief when Xiang split the former Qin Empire into the Eighteen Kingdoms after the fall of the Qin dynasty. Zhang Han's territory was conquered by Liu Bang in 206 BC, and he committed suicide a year later.

Bai Qi, also known as Gongsun Qi (公孙起), was a military general of the Qin state in the Warring States period of China. Born in Mei, Bai Qi served as the commander of the Qin army for more than 30 years, being responsible for the deaths of over one million, earning him the nickname Ren Tu. According to the Shiji, he seized more than 73 cities from the other six hostile states, and to date no record has been found to show that he suffered a single defeat throughout his military career. He was named by Chinese historians as one of the four greatest generals of the Warring States period, along with Li Mu, Wang Jian, and Lian Po.

The Battle of Guìlíng (桂陵之戰) was fought between the states of Qí and Wei in the Warring States period of Chinese history. In 354 BC, an army from Wèi was laying siege to Handan, the capital of the State of Zhao. The next year, Zhao turned to Qi for help. Tian Ji and Sun Bin, acting as co-commanders of Qi, led an army to save Zhao. Sun Bin moves south intentionally to make an unsuccessful attack on Pingling, intending to convince Pang Juan that the Qi Army was too weak to achieve victory. Pang Juan, falling for the ruse, pooled more of his forces to besiege Handan. Although defeated, the Zhao Army fought desperately and suffered heavy losses to the Wei Army in the subsequent battle. After feigning defeat at Pingling, Sun Bin led his army directly to the Wei capital, Daliang. Wei scouts reported that the Qi Army had committed small groups to attack the city. Upon hearing the report, Wei general Pang Juan took his crack cavalry and left his infantry and supplies at Handan, making a mad dash in an attempt rescue Daliang. Pang Juan's troops were exhausted as they crossed the Yellow River and were ambushed and destroyed at Guiling by Sun's numerically superior army. Pang Juan managed to escape alone to Wei. This battle gives rise to a well-known proverb, "Besiege Wei to rescue Zhao" (圍魏救趙), which is also included as one of the Thirty-Six Strategies.

The Battle of Maling took place in Maling, currently Dazhangjia Town (大張家鎮), Shen County (莘县), Henan Province, in 342 BC during the Warring States period. The combatants were the State of Qi, who fought on behalf of the State of Han, and the State of Wei. This battle is well recorded in history texts and is famous for the tactics of Sun Bin, known as the "Tactic of Missing Stoves", in which one side is led to underestimate the other by creating an illusion of soldiers running away from the army.

Sun Bin was a Chinese general, military strategist, and writer who lived during the Warring States period of Chinese history. A supposed descendant of Sun Tzu, Sun was tutored in military strategy by the hermit Guiguzi. He was accused of treason while serving in the Wei state and was sentenced to face-tattooing and had his kneecaps removed, permanently crippling him. Sun escaped from Wei later and rose to prominence in the Qi state, by serving as a military strategist and commander. He led Qi to victory against the Wei state at the Battle of Guiling and Battle of Maling. Sun authored the military treatise Sun Bin's Art of War, which was rediscovered in a 1972 archaeological excavation after being lost for almost 2000 years.

King Zhaoxiang of Qin, or King Zhao of Qin (秦昭王), born Ying Ji (Chinese: 嬴稷, was the king of Qin from 306 BC to 251 BC. He was the son of King Huiwen and younger brother of King Wu.

Qin's wars of unification were a series of military campaigns launched in the late 3rd century BC by the Qin state against the other six major Chinese states — Han, Zhao, Yan, Wei, Chu and Qi.

King Wei of Qi, whose personal name was Tian Yinqi (田因齊), was the king of the northern Chinese state of Qi during the Warring States period, when Qi was one of the most powerful states in China. He reigned from 356 to 320 BC. or according to another source from 378 to 343 BC. He was the first ruler of Qi to style himself "king".

Marquess Cheng of Zhao was a ruler of the State of Zhao during the Warring States Period of Chinese history. Born Zhào Zhòng, he was the son of Marquess Jing of Zhao.

Pang Juan was an ancient Chinese military general of the Wei state during the Warring States period.

Tian Dan was a general and nobleman of the major state of Qi during the Warring States period of ancient China. He was known for a spectacular military tactic called "Fire Cattle Columns". After the kingdom was nearly destroyed under the rule of King Min of Qi, he helped regain its territory and restored the king's son. He later fought the Beidi nomads, either in the far north or in areas in or between the various northern Chinese states.

Retainers in China from pre-Qin through Han times were a special social group, who lived as dependents under a noble, an officeholder, or a powerful landlord. They were designated binke,, shike, menke. Retainers stayed long-term at the house of their host, were fed by him, and obtained also many other benefits through him, such as money, reputation, social position, appreciation, and so on. In return, a retainer would have rendered certain services to his host. But he was free to come and go, and he could leave when he was not treated politely or when he disapproved of the behavior of his host. 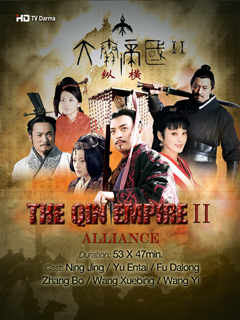 The Qin Empire II: Alliance is a 2012 Chinese television series adapted from Sun Haohui's novel of the same Chinese title, which romanticises the events in China during the Warring States period primarily from the perspective of the Qin state during the reigns of King Huiwen and King Wu. 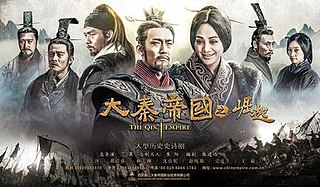 The military of the Warring States refers primarily to the military apparatuses of the Seven Warring States which fought from around 475 BC to 221 BC when the state of Qin conquered the other six states, forming China's first imperial dynasty, the Qin dynasty.