Emperor of China is the title given the monarch of China during the imperial period of Chinese history. In traditional Chinese political theory, the Emperor was considered the Son of Heaven and the autocrat of All under Heaven. Under the Han dynasty, Confucianism replaced Legalism as the official political theory and succession theoretically followed agnatic primogeniture. The Chinese emperors who shared the same family were classified into historical periods known as dynasties. The absolute authority of the emperor was notionally bound with various duties and obligations; failure to uphold these was thought to remove the dynasty's Mandate of Heaven and to justify its replacement. In practice, emperors and heirs sometimes avoided the strict rules of succession and dynasties' ostensible "failures" were detailed in official histories written by their successful replacements. The power of the emperor was also often limited by the imperial bureaucracy staffed by scholar-officials and eunuchs and by filial obligations to surviving parents and to dynastic traditions, such as those detailed in the Ming dynasty's Ancestral Instructions.

Children of Troubled Times, also known as Fēngyún Érnǚ, Children of the Storm, and several other translations, is a patriotic 1935 Chinese film most famous as the origin of "The March of the Volunteers", the national anthem of the People's Republic of China. The movie was directed by Xu Xingzhi and written by Tian Han and Xia Yan. Yuan Muzhi plays an intellectual who flees the trouble in Shanghai to pursue the glamorous Wang Renmei only to join the Chinese resistance after the death of his friend. 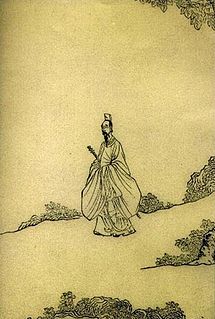 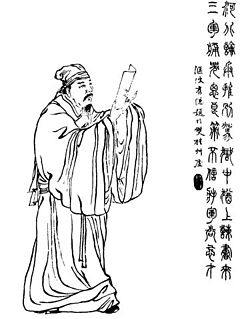 Portrait of Home is a Chinese language drama serial which was filmed for and broadcast on Singapore's Mediacorp TV Channel 8 in 2005. It stars Chen Shucheng, Adrian Pang, Xiang Yun, Louise Lee, Richard Low, Cynthia Koh & Yvonne Lim as the casts of the series. It is shown on weekdays at 7pm.

Yan Rou was a military general of the state of Cao Wei during the Three Kingdoms period of China. He previously served under the warlord Cao Cao in the late Eastern Han dynasty. 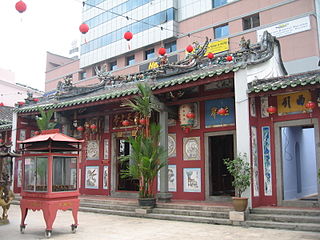 Johor Bahru Old Chinese Temple known as Old Temple by the locals, is a Chinese temple located in Johor Bahru, Johor, Malaysia. Located at Jalan Trus, the temple is flanked by modern skyscrapers. This temple is one of the oldest structures in the city and become the symbol of unity among five Chinese ethnic groups of Teochew, Hoklo (Hokkien), Cantonese, Hakka and Hainanese people. 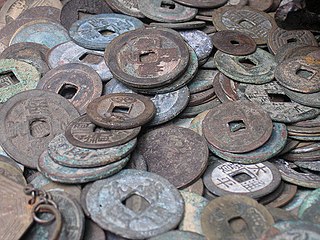 Ancient Chinese coinage includes some of the earliest known coins. These coins, used as early as the Spring and Autumn period, took the form of imitations of the cowrie shells that were used in ceremonial exchanges. The Spring and Autumn period also saw the introduction of the first metal coins; however, they were not initially round, instead being either knife shaped or spade shaped. Round metal coins with a round, and then later square hole in the center were first introduced around 350 BCE. The beginning of the Qin Dynasty, the first dynasty to unify China, saw the introduction of a standardised coinage for the whole Empire. Subsequent dynasties produced variations on these round coins throughout the imperial period. At first the distribution of the coinage was limited to use around the capital city district, but by the beginning of the Han Dynasty, coins were widely used for such things as paying taxes, salaries and fines. 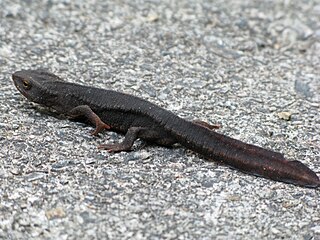 Paramesotriton, also known as warty newts or Asian warty newts, is a genus of salamanders in the family Salamandridae. The genus is found in southwestern and southern China and in northern Vietnam. Most of the species are endemic to China, and the majority of them have been described recently, since 2008. The genus includes both pond and stream dwellers.

Qieding District is a coastal suburban district in Kaohsiung, Taiwan.

The Battle of White Wolf Mountain was a battle fought in 207 in the late Eastern Han dynasty of China. The battle took place in northern China, beyond the frontiers of the ruling Eastern Han dynasty. It was fought between the warlord Cao Cao and the nomadic Wuhuan tribes, who were allied with Cao Cao's rivals Yuan Shang and Yuan Xi. The victory attained by Cao Cao dashed the hopes of a Wuhuan dominion, and the Wuhuan eventually became weakened, lost importance, and were gradually absorbed into China or the Xianbei tribes. 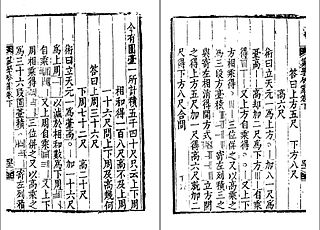 Tian Yuan is a Chinese-born table tennis player who competes internationally for Croatia. She competed for Croatia at the 2012 Summer Olympics reaching the second round.

Tian Yuan may refer to: