Last updated November 05, 2020
In this Chinese name, the family name is Tian .

At age of only 16, she joined local band Hopscotch as vocal and lyricist. The band was signed under to major label Modern Sky in 2002, and released their first English-language album that year, titled A Wishful Way . The album was influenced by trip hop and indie rock, and well received by some critics and general public in China due to its fresh sound. Tian Yuan's singing career paused temporarily when a contract dispute occurred between her and Modern Sky. Tian Yuan is now recording her first solo album under a new label, Dong Music. Her 11-song solo album Tian Yuan was released in 2010.

In 2002, Tian released her English-language novel, Zebra Woods , which received some international acclaim, and wrote a collection of short stories while touring for A Wishful Way, which was later published in China. In May 2007, Tian Yuan released her second novel Double Mono , a novel about love, youth and self-discovery.

Tian's acting debut was in the 2004 Hong Kong film Butterfly , which she starred as a lesbian singer, alongside Josie Ho. Her performance won an award as the Best New Performer at the 24th Hong Kong Film Award and Taiwan's Golden Horse Film Awards. 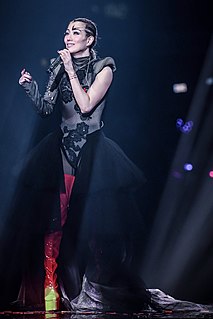 Sammi Cheng Sau-man is a Hong Kong singer and actress. She is one of the most prominent female singers in Hong Kong, with album sales of over 25 million copies throughout Asia and the Pacific. Most notably in the 1990s, she was dubbed by the media as the "Cantopop Queen" and diva. Having success in entertainment industry for about three decades, Cheng has also been regarded as one of the most popular Hong Kong artists known in Asia Pacific.

Faye Wong is a Hong Kong singer-songwriter and actress, often referred as "heavenly queen" or the "diva of Asia". Early in her career she briefly used the stage name Shirley Wong. Born in Beijing, she moved to British Hong Kong in 1987 and came to public attention in the early 1990s by singing in Cantonese, often combining alternative music with mainstream Chinese pop. Since 1994 she has recorded mostly in her native Mandarin. In 2000 she was recognised by Guinness World Records as the Best Selling Canto-Pop Female. Following her second marriage in 2005 she withdrew from the limelight, but returned to the stage in 2010 amidst immense interest. 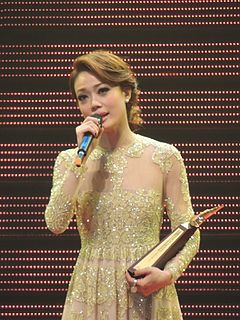 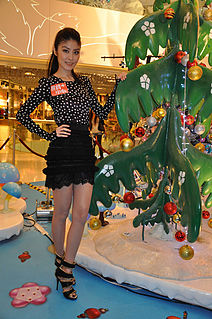 Kelly Chen is a Hong Kong Cantopop singer and actress. She has been referred to as a "Diva of Asia". Chen has great success in the East Asian entertainment industry with nearly 20 million record sales of 38 albums. She has won over 300 awards and is involved in many philanthropic activities. She was rewarded as one of "The Outstanding Young Persons of the World" in 2004 by the Junior Chamber International and "Young Global Leaders" by World Economic Forum in 2009. Chen is a lyric mezzo-soprano. 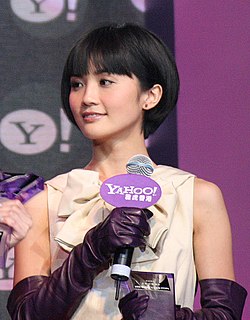 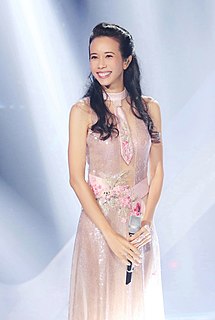 Karen Mok is a Hong Kong pop singer who is one of the leading Asian pop singers and actresses with a career spanning three decades. She is the first female Hong Kong singer to win the Golden Melody Award and has won it a total of three times. She has released 17 solo studio albums, starred in over 40 movies, has over 15 million followers on leading Chinese social media site Weibo and holds the Guinness World Record for the Highest Altitude Music Concert.

Mandopop refers to Mandarin popular music. The genre has its origin in the jazz-influenced popular music of the 1930s Shanghai known as Shidaiqu, later influences came from Japanese enka, Hong Kong's Cantopop, and Taiwan's Hokkien pop—in particular the Campus Song folk movement of the 1970s. In contemporary times, it has become strongly influenced by K-pop. 'Mandopop' may be used as a general term to describe popular songs performed in Mandarin. The English term was coined around 1980 soon after "Cantopop" became a popular term for describing popular songs in Cantonese; "Mandopop" was used to describe Mandarin-language popular songs of that time, some of which were versions of Cantopop songs sung by the same singers with different lyrics to suit the different rhyme and tonal patterns of Mandarin.

The Pancakes is a Hong Kong–based one-girl band consisting of independent singer-songwriter Dejay Choi. The music of the Pancakes is characterised by Dejay's very innocent, almost childlike voice with bright and catchy melodies. Most of the Pancakes' songs have English lyrics, unlike the majority of Hong Kong pop music, where Cantonese is the norm. 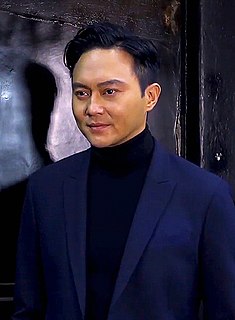 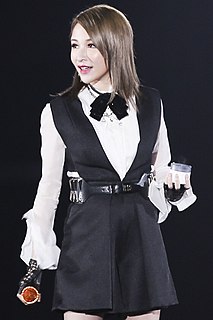 Elva Hsiao is a Taiwanese singer, songwriter, dancer, actress and businesswoman. Since being signed to a record deal in 1998 after competing in a singing competition, Hsiao has gone on to release fourteen studio albums and has achieved great commercial success within the Chinese pop music industry. Known for her R&B influenced ballads, the artist's first album, Elva Hsiao (1999), was considered one of the first to incorporate R&B in the Chinese market. Her most recent album Shut Up and Kiss Me was released in 2014.

Li Yuchun, better known by her stage name Chris Lee, is a Chinese singer, songwriter, DJ and actress. She debuted her singing career by winning the champion at the Chinese singing contest Super Girl in 2005. The next year she released her debut album The Queen and the Dreams. Referred to as the mother of the unisex look in China, she has achieved success in China. She is also known for her lower mezzo-soprano vocal range, a rarity amongst Mainland Chinese female singers. 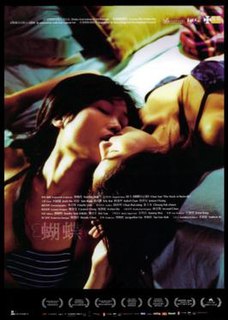 Butterfly is a 2004 Hong Kong drama film based on Taiwanese writer Xue Chen's novel The Mark of Butterfly (蝴蝶的記號). The film was directed by female award-winning director Yan Yan Mak and produced by Jacqueline Liu and Yan Yan Mak with the sponsorship of Hong Kong Art Development Council. 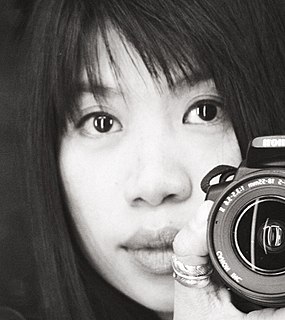 Yan Yan Mak is a Hong Kong based female award-winning director. She graduated from the Hong Kong Academy for Performing Arts; as a student, Yan Yan had worked for the film industry as assistant director, production manager, art director and wardrobe designer. Her graduation short film Snapshots won the Distinguish Award at the International Short Film & Video Awards of Hong Kong in 1998. 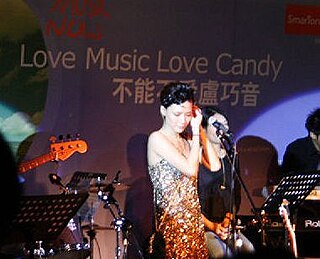 Cheng Lin is a solo singer from China. Her first involvement in the music industry was at the age of 13 when she released the track "Little Horn". Since then she has sold 25 million albums across Asia. Cheng's latest album was Collaborations the album, which was produced by Grammy Award winning producer KC Porter.