Tian Yunzhang (田蕴章;born in May 1, 1945 in Tianjin, China) is a Chinese calligrapher and a calligraphy professor of Nankai University. [1]

The 24th Golden Eagle Awards were held August 31, 2008, in Changsha, Hunan province. Nominees and winners are listed below, winners are in bold. 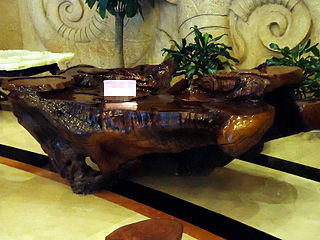 Root carving is a traditional Chinese art form. It consists of carving and polishing tree roots into various artistic creations.

Suzhou Culture and Arts Centre, formerly known as Suzhou Science and Culture Arts Centre (SSCAC), located to the east of Jinji Lake at the China–Singapore Suzhou Industrial Park, Suzhou, Jiangsu, is a cultural centre in China. It occupies an area of 138,000 m2, and its total gross floor area is 150,000 square metres. It is the permanent awards base of China Film Golden Rooster Awards.

The Frontline Song and Dance Troupe (前线歌舞团) founded 1946 in Nanjing, officially named in 1955, is a dance song and theatre troupe of the East China command of the Peoples Liberation Army. The troupe was the testing ground and originator of many of the patriotic and revolutionary plays and musicals of the 1960s-1980s. The troupe continues to appear regularly on China Central Television.

Shaoyang University is a university located in Shaoyang, Hunan, China.

Yan Bingyan is a Chinese film and television actress. She is the descendant of Yan Hui.

Guzhen International Lighting Fair is to "the lighting capital of China are" town for relying on the industry, with a total area of 70 million square meters, consists of three natural village town, Cao Bu, Haizhou composition.

Gao Weiguang is a Chinese actor.

The Golden Goblet Outstanding Artistic Achievement is a special jury prize awarded to films in the main category of competition at the Shanghai International Film Festival.

Liao Xiangzhong is a Chinese animation and digital art expert who has served as President of the Communication University of China (CUC) since March 2018. He was Vice President of CUC from November 2010 to March 2018. He is a PhD advisor and professor of Digital Media Art at CUC.

Qiu Jiongjiong is a Chinese contemporary artist and filmmaker based in Shenzhen China.