Tianba is a town in the Garzê Tibetan Autonomous Prefecture of Sichuan, China.

Garzê Tibetan Autonomous Prefecture also known as Ganzi — is an autonomous prefecture of China occupying the western arm of Sichuan. It is sometimes spelled "Kardzé" and "Garzin" by non-government sources.

Dvakačovice is a small village in the Pardubice Region of the Czech Republic. It has around 150 inhabitants.

Ochota is a district of Warsaw, Poland, located in the central part of the Polish capital city's urban agglomeration. 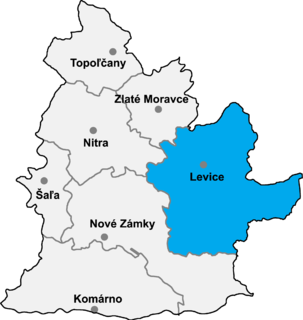 Wawrzyszew is a village in the administrative district of Gmina Błonie, within Warsaw West County, Masovian Voivodeship, in east-central Poland. It lies approximately 3 kilometres (2 mi) north-west of Błonie, 15 km (9 mi) west of Ożarów Mazowiecki, and 29 km (18 mi) west of Warsaw.

Vesitükimaa is a small, uninhabited Estonian islet located in Torgu Parish, at the tip of Sõrve Peninsula of Saaremaa island. It is a site of European Community importance for the Boreal biogeographical region, its coordinates are 57°53′49″N 22°02′26″E and its territory is 12,6 km2.

Stegny is a village in the administrative district of Gmina Tuchola, within Tuchola County, Kuyavian-Pomeranian Voivodeship, in north-central Poland. It lies approximately 5 kilometres (3 mi) north-east of Tuchola and 57 km (35 mi) north of Bydgoszcz.

Ağbulaq is a village in the Khojali Rayon of Azerbaijan.

Malków is a village in the administrative district of Gmina Żarnów, within Opoczno County, Łódź Voivodeship, in central Poland.

Wilczkowice is a village in the administrative district of Gmina Radoszyce, within Końskie County, Świętokrzyskie Voivodeship, in south-central Poland. It lies approximately 7 kilometres (4 mi) south-west of Radoszyce, 25 km (16 mi) south-west of Końskie, and 33 km (21 mi) north-west of the regional capital Kielce.

Linxiang District is a district of the city of Lincang, Yunnan province, China.

Grąbczyński Młyn is a settlement in the administrative district of Gmina Szczecinek, within Szczecinek County, West Pomeranian Voivodeship, in north-western Poland.

The Empire City Historic Landmark is a California Historic Landmark in honor of the pioneer John C. Marvin who from 1850, settled on the south bank of the Tuolumne River and called the town "Empire City". Empire City was the head of navigation for small steamboats that could ascend the Tuolumne River carrying passengers and supplies. It was the shipping point for the large grain crops grown in the area. At its height, the town had three stores, a three-story hotel, two boarding houses, a blacksmith shop, a church, and a school house. Empire City was voted as the county seat of Stanislaus County from October 1854 to December 1855. The town was destroyed by flood waters during the Great Flood of 1862. A new railroad town was built 40 years later 1 mile north of the old town site, taking the name Empire.

Slim is a town and commune in M'Sila Province, Algeria. According to the 1998 census it has a population of 5777.

Suurküla is a village in Märjamaa Parish, Rapla County in western Estonia. 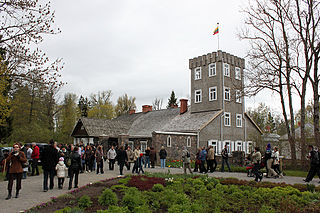 Burbiškis Manor is a former residential manor in Radviliškis district. It is famous for its tulips festival.

Al-Ittihad Stadium is a football stadium in Aleppo, Syria. It is owned by the Aleppo-based al-Ittihad SC and has a capacity of 10,000 spectators. 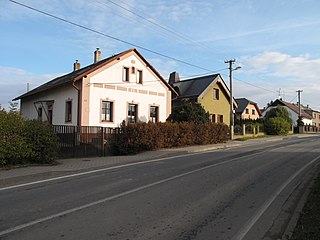 Uhlířov is a village in the Moravian-Silesian Region of the Czech Republic. As of January 1, 2008, the population was 359.

Dolní Životice is a village in the Moravian-Silesian Region of the Czech Republic. As of January 1, 2008, the population was 1,150.