The Tianchan Peking Opera Center and Yifu Theater (traditional Chinese :天蟾京劇中心逸夫舞臺; simplified Chinese :天蟾京剧中心逸夫舞台), commonly known as Tianchan Yifu Theater , or just Tianchan,Yifu, or Tianchan Theater, is a theater in Shanghai, China. Built in 1925, it opened on the Chinese New Year of 1926 as the Tahsin Theater(Chinese :大新舞臺), and was subsequently taken over by the tycoon Ku Chu-hsuan(Chinese :顧竹軒) in 1930, who renamed as "Tianchan." [1]

Most performances there are Peking Operas, with occasional Yue opera(also known as "Shaohsing opera") or Kunqu performances.

Mei Ting is a Chinese actress.

Yu Shangyuan was a 20th-century playwright, Chinese drama educationist and theorist. Yu Shangyuan's hometown was in Shashi, Hubei Province, China. His whole family depended on low wages to make a living. However, he enjoyed drama since he was a little boy. Being recommended by Hu Shih and Chen Duxiu, he went to Peking University and graduated from the English department, then, he went to America for further study. As one of the founders of Chinese modern dramas, he made a considerable contribution to dramaturgical theory. His main achievements are his contribution to the development of "the Chinese drama movement" and his representative works: Syllabus of Performing Arts.

Ma Su is a Chinese actress.

Shanghai Jingju Theatre Company is a theatre company based in Shanghai, China, which produces Jingju. It was founded in 1955, with Zhou Xinfang its director. The Shanghai Beijing-Opera Theatre is at 168 Yueyang Road, Xuhui, Shanghai.

Chong Danni is a Chinese actress. She is known for her role in fantasy romance comedy series, Cinderella Chef.

Zhu Shaoyu in a Chinese composer. His opera You and Me was staged at the China's National Centre for the Performing Arts (NCPA) in 2013. 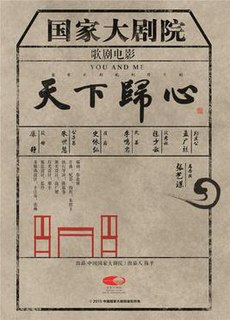 You and Me is a modern Peking opera by composer Zhu Shaoyu. Staged by Zhang Yimou, directing his first Peking opera, the show premiered at the National Centre for the Performing Arts, China (NCPA) in 2013. A 2014 performance of the opera was released on DVD by NCPA Classics in China, and Accentus overseas.

Xu Xiaoxiang, born Xu Xin, courtesy name Xinyi and art name Diexian, was a Qing dynasty kunqu and Peking opera artist based in Beijing. He specialized in portraying xiaosheng roles, or younger gentlemen. His best known roles included Zhou Yu in Meeting of Heroes (群英會), Xu Xian in Legend of the White Snake, and Liu Mengmei in The Peony Pavilion. 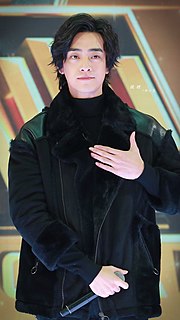 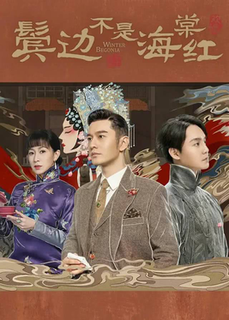 Winter Begonia is a 2020 Chinese television series starring Huang Xiaoming, Yin Zheng, and Charmaine Sheh, based on Shui Ru Tian Er's BL web novel of the same name. It aired exclusively on iQiyi and tells the story of the close relationship between a shrewd businessman and a Peking opera genius right before the World War II. While the original web novel depicted the relationship between the two main men as romantic, the adaptation changed this depiction into a "bromance".

The Jingju Theater Company of Beijing, formerly known as the Peking Opera Theater Company of Beijing, also known as the Beijing Peking Opera Company, is a theater company based in Beijing, and the largest jingju performing group in China. Its main venue is the Chang'an Grand Theater, and productions are often aired nationally on CCTV-11. Unestablished performers also hone their skills in smaller theaters.