Tiangong-2 was neither designed nor planned to be a permanent orbital station;rather,it was intended as a testbed for key technologies used in the Tiangong station (Chinese large modular space station) of which the first module launched on 29 April 2021 [9] and the remaining modules of which are planned for launch in 2022. [10]

The China Manned Space Engineering Office published a brief description of Tiangong-2 and its successor Tiangong-3 in 2008, indicating that at least two crewed spaceships would be launched to dock with Tiangong-2. [2]

Tiangong-2 was originally expected to be launched by the China National Space Agency (CNSA) by 2015 [11] to replace the prototype module Tiangong-1, which was launched in September 2011. [12] In March 2011, Chinese officials stated that Tiangong-2 was scheduled to be launched by 2015. [11] [13] An uncrewed cargo spacecraft will dock with the station, [11] allowing for resupply. [14]

Aboard the Shenzhou 11, launched from Jiuquan Satellite Launch Center in the Gobi desert, were Commander Jing Haipeng and Chen Dong who formed the inaugural crew for the space laboratory. [19] It was China's first crewed mission for more than three years.

During the 30 days the two astronauts were aboard Tiangong-2, they conducted a number of scientific and technical experiments on the physiological effects of weightlessness, tests on human-machine collaboration on in-orbit maintenance technology and released an accompanying satellite successfully. Accompanying photography and near-distance fly-by observation were also carried out. They collected abundant data and made some achievements in programs of gamma-ray burst polarimeter, space cold atomic clock and preparation of new materials. [20]

In June 2018, Tiangong-2 performed orbital maneuvers lowering the orbit to 292 × 297 kilometers, likely in preparation for deorbiting. It then returned to its usual orbit. [23] [24]

In July 2019, the China Manned Space Engineering Office announced that it was planning to deorbit Tiangong-2 in the near future, but no specific date was given. [25] The station subsequently made a controlled reentry on 19 July 2019 and burned up over the South Pacific Ocean. [26]

The dimensions of Tiangong-2 were:

Tianhe is the core module of the Chinese space station. The core module and its other parts are to be launched between 2021 and 2022.

A space station is a spacecraft capable of supporting a human crew in orbit for an extended period of time, and is therefore a type of space habitat. It lacks major propulsion or landing systems. An orbital station or an orbital space station is an artificial satellite. Stations must have docking ports to allow other spacecraft to dock to transfer crew and supplies. The purpose of maintaining an orbital outpost varies depending on the program. Space stations have most often been launched for scientific purposes, but military launches have also occurred.

The Tiangong program is China's space program to create a modular space station, comparable to Mir. This program is independent and unconnected to any other international space-active countries. The program is part of the China Manned Space Program began in 1992. The core module, the Tianhe was finally launched on 29 April 2021 marking the start of the Tiangong Space program deployment.

Tiangong, officially the Tiangong space station, is a space station being constructed by China in low Earth orbit between 340 and 450 km above the surface. Being China's first long-term space station, it is the goal of the "Third Step" of the China Manned Space Program. Once completed, Tiangong will have a mass between 80 and 100 t, roughly one-fifth the mass of the International Space Station and about the size of the decommissioned Russian Mir space station.

Shenzhou 10 was a crewed spaceflight of China's Shenzhou program that was launched on 11 June 2013. It was China's fifth crewed space mission. The mission had a crew of three astronauts: Nie Haisheng, who was mission commander and previously flew on Shenzhou 6; Zhang Xiaoguang, a former PLAAF squadron commander who conducted the rendezvous and docking; and Wang Yaping, the second Chinese female astronaut. The Shenzhou spacecraft docked with the Tiangong-1 trial space laboratory module on 13 June, and the astronauts performed physical, technological, and scientific experiments while on board. Shenzhou 10 was the 2nd and final expedition and mission to Tiangong-1 in this portion of the Tiangong program. On 26 June 2013, after a series of successful docking tests, Shenzhou 10 returned to Earth.

The China Manned Space Program, also known as Project 921 is a space program developed by the People's Republic of China and run by the China Manned Space Agency (CMSA), designed to develop and enhance human spaceflight capabilities for China. It was approved on 21 September 1992 and been in operation ever since. 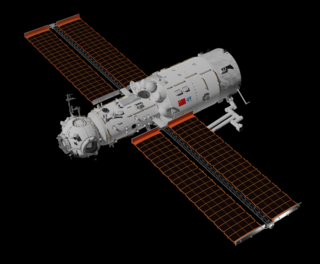 Tianhe, officially the Tianhe core module, is the first module to launch of the Tiangong space station. It was launched into orbit on 29 April 2021, as the first launch of the final phase of Tiangong program, part of the China Manned Space Program. 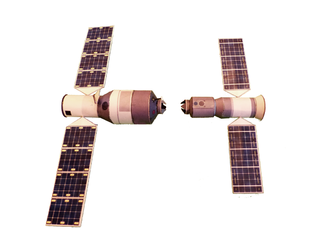 Shenzhou 11 was a crewed spaceflight of the Shenzhou program of China, launched on 17 October 2016 from the Jiuquan Satellite Launch Center. It was China's sixth crewed space mission, at 33 days, it was the longest until the follow up Shenzhou 12 mission which lasted 3 months. Two days after launch, it docked with the Tiangong-2 space laboratory, which had been launched on 15 September 2016. Shenzhou 11 was the 1st and only expedition and mission to Tiangong-2 in this portion of the Tiangong program.

Tianzhou 1 was the debut mission of the Tianzhou-class unmanned cargo spacecraft. It was developed as part of the manned space program of China. Tianzhou means "heavenly vessel" in Chinese. On 20 April 2017, Tianzhou 1 was launched by rocket Long March 7 at China Wenchang Spacecraft Launch Site. It successfully docked with the Tiangong-2 space laboratory on 22 April 2017 at 12:16 (UTC+8). Tianzhou 1 was deorbited on 22 September 2017. It plunged into Earth's atmosphere and burned up after a set of braking maneuvers under ground control.

The Tianzhou is a Chinese automated cargo spacecraft developed from China's first prototype space station Tiangong-1 to resupply its modular space station. It was first launched on the Long March 7 rocket from Wenchang on April 20, 2017 and demonstrated autonomous propellant transfer.

Tianzhou 2 was a mission of the Tianzhou-class unmanned cargo spacecraft. The launch took place at 29 May 2021, 12:55:29 UTC. The spacecraft successfully docked with the Tiangong space station later on the same day. 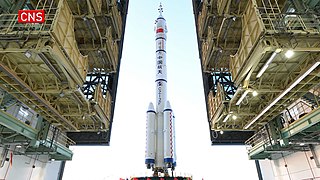 Shenzhou 13 was a Chinese spaceflight launched on 15 October 2021 at 16:23 UTC. The flight marked the eighth crewed Chinese spaceflight and the thirteenth flight of the Shenzhou program. The spacecraft carried three People's Liberation Army Astronaut Corps (PLAAC) taikonauts on the second flight to the Tianhe core module, the first module of the Tiangong space station. The launch of the three-person crew with a Long March-2F launch vehicle took place from the Jiuquan Satellite Launch Center.

Shenzhou 12 was a Chinese spaceflight launched on 17 June 2021. The flight marked the seventh crewed Chinese spaceflight and the twelfth flight of the Shenzhou program. The spacecraft carried three members of the People's Liberation Army Astronaut Corps (PLAAC) on the first flight to the Tianhe core module, the first module of the Tiangong space station. This was the first Chinese manned spaceflight since Shenzhou 11 in 2016.

Tianzhou 3 was a mission of the Tianzhou-class uncrewed cargo spacecraft, launched on 20 September 2021, at 07:10:11 UTC. Like previous Tianzhou missions, the spacecraft was launched from Wenchang Satellite Launch Center in Hainan, China on a Long March 7 launch vehicle.

Tianzhou 4 is the fourth mission of the Tianzhou-class unmanned cargo spacecraft, and the third resupply mission to Tiangong Space Station carrying 5 tons of cargos and 1 ton of propellant. It is the largest load capacity cargo spacecraft that is on active duty. It launched on 9 May 2022, docking successfully with the Tiangong space station at the aft port 6 hours after launch. Like previous Tianzhou missions, the spacecraft launched from the Wenchang Satellite Launch Center in Hainan, China on a Long March 7 rocket.

Shenzhou 14 is a Chinese spaceflight that launched on 5 June 2022 at 02:44 UTC. The flight marks the ninth crewed Chinese spaceflight and the fourteenth flight of the Shenzhou program. The spacecraft carries three People's Liberation Army Astronaut Corps (PLAAC) taikonauts on the third flight to the Tianhe core module, the first module of the Tiangong space station. The launch of the three-person crew with a Long March-2F launch vehicle took place from the Jiuquan Satellite Launch Center. 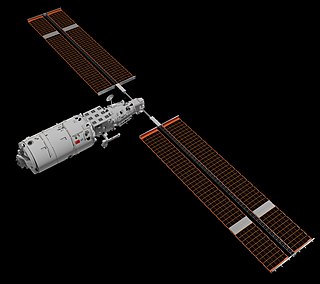 Wentian, officially the Wentian laboratory cabin module, is a major module of the Tiangong space station. It is the first Laboratory Cabin Module launched, and the first module to extend the existing Tianhe core module of the station. It was launched into orbit from the Wenchang Spacecraft Launch Site on 24 July 2022, successfully docking with Tianhe at 19:13 UTC on the same day. On 25 July 2022 at 02:03 UTC, the crew of Shenzhou 14 opened the hatch and entered the module for the first time.