The Guangdong Olympic Centre Stadium or officially Aoti Main Stadium is a multi-purpose stadium in Guangzhou, People's Republic of China. Currently used mostly for football matches, the stadium was opened in 2001. It has a capacity of 80,012, making it the largest stadium in the country by seating capacity. 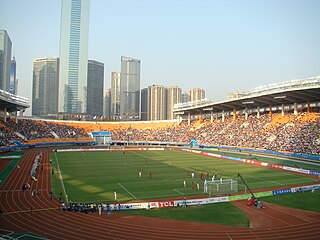 The Guangdong Provincial People's Stadium is a multi-purpose stadium in Guangzhou, China. It is currently used mostly for football matches. The stadium holds 15,000 people. The stadium is best reached by taking Guangzhou Metro Line 1 to Martyrs' Park Station.

Zhongshan Sports Center Stadium is a multi-use stadium in Zhongshan, Guangdong, China. It is currently used mostly for association football matches and was one of the six stadiums used for the 1991 FIFA Women's World Cup. The stadium has a capacity of 12,000 people. The stadium are all-seaters with multi-colour seats. It also has an all-weather track and field surface. 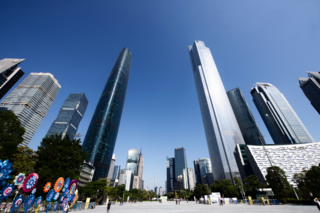 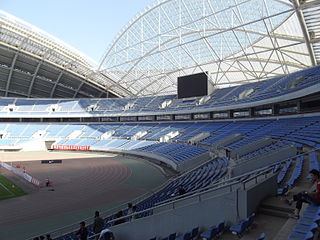 The Yuexiushan Stadium is a multi-purpose stadium in Guangzhou, Guangdong, China, named for its location at the foot of Yuexiu Hill. It is currently mostly used for football matches and also sometimes for athletics. It is located on 4 Yingyuan Road.

Oriental Sports Center formerly known as Jiyang Road is an interchange station between Lines 6, 8 and 11 of the Shanghai Metro. It is the first cross-platform interchange in Shanghai as well as the southern terminus of Line 6; it is also the first station in Pudong when heading southeast-bound on Line 11 towards Disney Resort.

Tianhe Coach Terminal Station is a terminus on Line 3 of the Guangzhou Metro, as well as a station on Guangzhou Metro's Line 6. It started operations on 30 December 2006. It is located under the junction of Tianyuan Road (天源路) and the Guangzhou North Ring Expressway (广州北环高速公路) in the Tianhe District. It is also located at the East Square of the Tianhe Coach Terminal, which has services to other locations in Guangdong and other provinces. 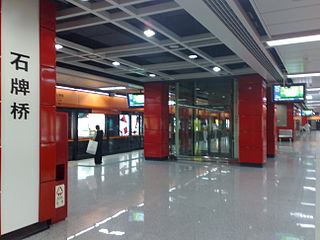 Shipaiqiao Station is a station of Line 3 of the Guangzhou Metro. It started operations on 30 December 2006. It is located in Tianhe District, underneath Tianhe Road between East Tianhe Road and East Tiyu Road.

Line 3 of the Guangzhou Metro is a 67.3-kilometer (41.8 mi) rapid transit line connecting Panyu Square to Tianhe Coach Terminal. The entire line, including all track and stations, is located in tunnels. Its 60.4 km (37.5 mi) main branch, excluding the 6.9 km (4.3 mi) branch between Tianhe Coach Terminal and Tiyu Xilu, is the longest continuous subway tunnel in the world, and the longest rail tunnel of any kind.

Huangcun station, formerly Olympic Sports Center station (奥林匹克中心站) when planning, is an interchange station between Line 4 and Line 21 of the Guangzhou Metro, and also the terminus of Line 4. It is located at the underground outside Guangdong Olympic Stadium in Huangcun Subdistrict (黄村街道), Tianhe District. It started operation on 25 September 2010. Line 4 linking the Asian Games New Town outside Haibang Station with Guangdong Olympic Stadium plays a major role in carrying passengers during the Guangzhou Asian Games. The station became a transfer station with Line 21 on 20 December 2019. It is located near the Tianhe East railway station.

Jushu Station, formerly Fangcun Sports Center Station (芳村体育馆站) or Jucun Station (菊村站) during planning, is a metro station on the Guangfo Line. It is located under the southwest of the Fangcun Sport Center (芳村体育中心) in Fangcun, Liwan District, Guangzhou. It started operation on 3 November 2010. 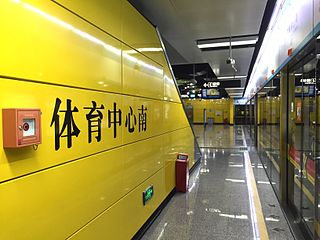 The Huangpu Sports Centre Stadium is a multi-purpose stadium in Huangpu District, Guangzhou, China. the stadium has a capacity of 12,000 people. 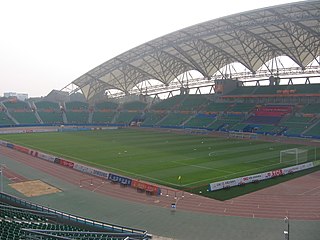