Tianhui may refer to:

Liu Jun (926–968) originally Liu Chengjun (劉承鈞), was the 2nd ruler of the Shatuo state of Northern Han. His capital was at Taiyuan, Shanxi Province. He was the 2nd son of Liu Chong, the 1st emperor of Northern Han. In 951, after the death of his brother Liu Yun, he became the heir of his father. During his reign, in 960, the Later Zhou dynasty was overthrown and replaced by the Song dynasty.

Liu Jiyuan (劉繼元), was the last ruler of China's Northern Han kingdom in its Five Dynasties and Ten Kingdoms period. He was the grandson of Liu Min. He ruled Northern Han from 968 until 979, when he surrendered to the Song forces under Emperor Taizong of Song. 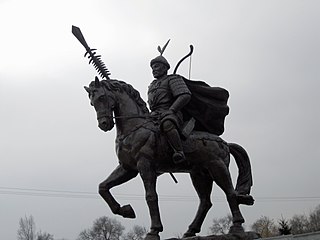 Emperor Taizong of Jin, personal name Wuqimai, sinicised name Wanyan Sheng, was the second emperor of the Jurchen-led Jin dynasty, which ruled northern China between the 12th and 13th centuries. His regnal name was "Tianhui" (天會). During his reign, the Jin dynasty conquered the Khitan-led Liao dynasty. He then led the Jurchens in their campaigns against the Song dynasty, captured the Song capital in 1127 and went on to occupy most of northern China. After his death, he was posthumously honoured with the temple name Taizong by his successor, Emperor Xizong.

Year 318 (CCCXVIII) was a common year starting on Wednesday of the Julian calendar. At the time, it was known as the Year of the Consulship of Licinianus and Crispus. The denomination 318 for this year has been used since the early medieval period, when the Anno Domini calendar era became the prevalent method in Europe for naming years.

The Jin dynasty or the Jin Empire (; Chinese: 晉朝; pinyin: Jìn Cháo, sometimes distinguished as the Sima Jin or Liang Jin was a Chinese dynasty traditionally dated from 266 to 420. It was founded by Sima Yan, son of Sima Zhao, who was made Prince of Jin and posthumously declared the founder of the dynasty. It followed the Three Kingdoms period, which ended with the conquest of Eastern Wu by the Jin.

Liu Bian, also known as Emperor Shao of Han and the Prince of Hongnong, was the 13th emperor of the Eastern Han dynasty in China. He became emperor around the age of 13 upon the death of his father, Emperor Ling, and ruled briefly from 15 May to 28 September 189 before he was deposed, after which he became known as the "Prince of Hongnong". His emperor title, "Emperor Shao", was also used by other emperors who were in power for very short periods of time. In 190, he was poisoned to death by Dong Zhuo, the warlord who deposed him and replaced him with his younger half-brother, Liu Xie.

Empress He, personal name unknown, posthumously known as Empress Lingsi, was an empress of the Eastern Han dynasty. She was the second empress consort of Emperor Ling and the mother of Emperor Shao. After the death of Emperor Ling in 189, she became empress dowager when her young son, Liu Bian, became the new emperor. She was caught up in the conflict between her brother, General-in-Chief He Jin, and the eunuch faction, who were both vying for power in the Han imperial court. After He Jin's assassination and the elimination of the eunuch faction, the warlord Dong Zhuo took advantage of the power vacuum to lead his forces into the imperial capital and seize control of the Han central government. He subsequently deposed Emperor Shao, replaced him with Liu Xie, and had Empress Dowager He poisoned to death.

Jin Zhun (靳準) was an official of the Chinese/Xiongnu state Han Zhao, who in 318 staged a coup against the Han Zhao emperor and his son-in-law Liu Can and then massacred the imperial Liu family. His forces were subsequently squeezed in by the succeeding emperor Liu Yao and the general Shi Le, and, facing probable defeat, his followers assassinated him. He was probably ethnically Han, but that is not completely clear.

Zhang Mao, courtesy name Chengxun (成遜), formally Prince Chenglie of (Former) Liang ( 涼成烈王) or Duke Cheng of Xiping (西平成公) was a ruler and the commonly accepted first ruler of the Chinese state Former Liang. During the brief reign of his grandnephew Zhang Zuo, he was honored as Prince Cheng of Liang (涼成王).

Zhang Jun, courtesy name Gongting (公庭), formally Duke Zhongcheng of Xiping or Duke Wen of Xiping was a ruler of the Chinese state Former Liang. During his reign, he at times used the Jin-created title of Duke of Xiping, but when forced to submit to Han Zhao and Later Zhao, he used the title Prince of Liang. Late in his reign, even when not under Later Zhao's pressure, he claimed the title of "Acting Prince of Liang." During the brief reign of his son Zhang Zuo, he was honored as Prince Wen of Liang (涼文王). 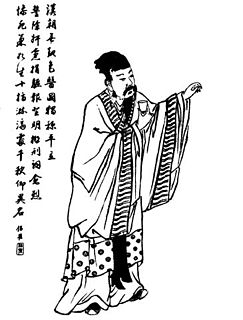 Ji Ben was an imperial physician who lived during the late Eastern Han dynasty of China. In 218, he started a rebellion with several others in the imperial capital, Xu, but the revolt was suppressed and the conspirators were captured and executed. 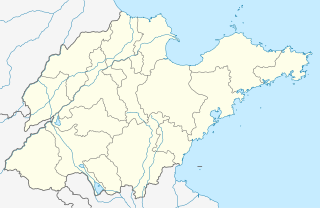 Jiyang is under the administration of Jinan, the capital of Shandong province, People's Republic of China.

Kuaiji Commandery, formerly romanized as K‘uai-chi Commandery, was a former commandery of China in the area of Hangzhou Bay. When first established, its capital was at Wu, which became known as "Kuaiji" from this role. The initial territory ran from the south bank of the Yangtze through most of modern Zhejiang to an indeterminate border among the free people of Minyue. Wu and Wuxing commanderies were later formed between the Yangtze and the north shore of Hangzhou Bay; the administration of the remainder of Kuaiji Commandery was then removed to the site of the former Yue capital in modern Shaoxing's Yuecheng District, which also became known as Kuaiji from this role. By the Tang, Hangzhou was also separated and Kuaiji ran from a little north of the Zhe River in the west to Ningbo in the east.