The first proposals to build railways in China began in the 1860s with opposition from the elite, who worried that it would increase the likelihood of regime change. However, following China's loss in the First Sino-Japanese War in 1895, the desire to modernize began to predominate. However, due to technical and financial constraints, foreign support was needed to build the earliest railways. At a conference in London in September 1898, British and German capitalists decided to build a railway from Tianjin to Zhenjiang. In May 1899, the Qing government agreed to the financing of the railway construction along with a series of bank loans. The proposed course for the railway was to connection the political center of China in the north to the economic hub in the southern region, as well as the Yangtze River. Construction of the railway began in 1908 and the line was completed in 1912. [2] All together, the original railway line was built with 85 stations, of which 31 were in Shandong province.

Rail traffic had to be ferried across the Yangtze to Nanjing to connect with the railroads passing through that city until the Nanjing Yangtze River Bridge was built across the river in 1968. Currently, it is the main section of Beijing–Shanghai railway.

The Nanjing Yangtze River Bridge, previously called the First Nanjing Yangtze Bridge, is a double-decked road-rail truss bridge across the Yangtze River in Nanjing, Jiangsu, connecting the city's Pukou and Gulou districts. Its upper deck is part of China National Highway 104, spanning 4,588 metres (15,052 ft). Its lower deck, with a double-track railway, is 6,772 metres (22,218 ft) long, and completes the Beijing–Shanghai railway, which had been divided by the Yangtze for decades. Its right bridge consists of nine piers, with the maximum span of 160 metres (525 ft) and the total length of 1,576 metres (5,171 ft). The bridge carries approximately 80,000 vehicles and 190 trains per day. 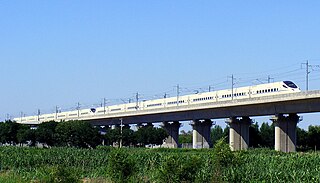 The Beijing–Shanghai high-speed railway is a high-speed railway that connects two major economic zones in the People's Republic of China: the Bohai Economic Rim and the Yangtze River Delta. Construction began on April 18, 2008, with the line opened to the public for commercial service on June 30, 2011. The 1,318-kilometer (819 mi) long high-speed line is the world's longest high-speed line ever constructed in a single phase.

The Beijing–Kowloon railway, also known as the Jingjiu railway is a railway connecting Beijing West railway station in Beijing to Shenzhen railway station in Shenzhen, Guangdong Province. It is connected with Hong Kong's East Rail across the border which terminates at Hung Hom station in Kowloon.

The Tientsin–Pukow Railway Operation was a follow up operation to the Battle of Beiping-Tianjin of the Japanese army in North China at the beginning of the Second Sino-Japanese War, fought concurrently with the Beiping–Hankou Railway Operation. The Tientsin–Pukow Railway Operation was not authorized by Imperial General Headquarters. The Japanese advanced following the line of the Tianjin-Pukou Railway aiming to the Yangtze River without meeting much resistance. The Japanese advance stopped at Jinan 36.67°N 116.98°E on Yellow River after majority of the participating Japanese forces were redirected for the Battle of Taiyuan and replaced by parts of the newly formed 109th division.

Pukou District, is one of 11 districts of Nanjing, the capital of Jiangsu province, China, lying northwest across the Yangtze River from downtown Nanjing.

The history of rail transport in China began in the late nineteenth century during the Qing Dynasty. Since then, it has become one of the largest rail networks in the world. 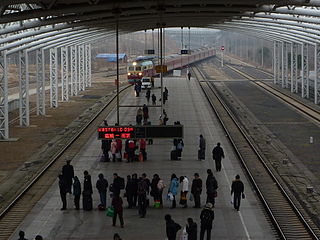 The Nanjing–Qidong railway, commonly referred to in short as the Ningqi railway, is a higher-speed rail line in Jiangsu Province, China. Its common name is derived from Ning, the one-character abbreviation for Nanjing and Qi, which refers to Qidong, a county-level city of Nantong.

The Xinyi–Changxing railway or Xinchang railway, also known as the Xinchang line, is a single-track railroad in eastern China between the cities of Xinyi in Jiangsu Province and Changxing County in Zhejiang Province. It runs north-south through the entire length of Jiangsu Province and the northern tip of Zhejiang. Major cities along route include Huai'an, Yancheng, Hai'an, Jingjiang, Jiangyin and Yixing. Including a 62.5 km spur from Hai'an to Nantong, the Xinchang railway is 638 km in total length. It used a train ferry to cross the Yangtze River, but this closed in 2019. Passenger services south of Hai'an have also been abandoned. 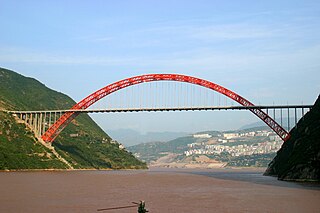 The bridges and tunnels across the Yangtze River carry rail and road traffic across China's longest and largest river and form a vital part of the country's transportation infrastructure. The river bisects China proper from west to east, and every major north–south bound highway and railway must cross the Yangtze. Large urban centers along the river such as Chongqing, Wuhan, and Nanjing also have urban mass transit rail lines crossing the Yangtze.

The Anhui–Jiangxi railway or Wan'gan railway, is a single-track railroad in eastern China between Wuhu in southern Anhui Province and Guixi in northern Jiangxi Province. The line is 551 km (342 mi) long and was built between 1905 and 1985. Cities along route include Wuhu, Xuancheng, Ningguo, Jixi, She County, Huangshan City, Xiuning, Yi County, and Qimen in Anhui Province and Jingdezhen, Leping, Wannian and Guixi in Jiangxi Province. 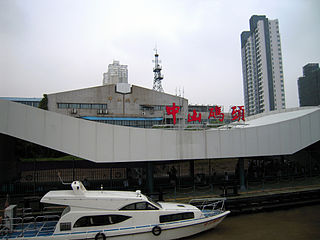 Zhongshan Wharf (Chinese:中山码头): located along Yangtze River, is a wharf in Xiaguan. It is near wharf No.7 of Port of Nanjing.

The Tongling–Jiujiang railway or Tongjiu railway, is a single-track railroad in eastern China between Tongling in Anhui Province and Jiujiang in Jiangxi Province. The line is 251 km (156 mi) long and follows the south bank of the Yangtze River. Major cities and towns along route include Tongling, Chizhou, Dongzhi County, Pengze, Hukou County and Jiujiang.

The Central China Railway was a railway company in Japanese-occupied China established after the Second Sino-Japanese War. It was a joint venture between Japan, the Reformed Government of the Republic of China and the Nanjing National Government. Together with the North China Transportation Company, it was responsible for management of China's railways during the Japanese occupation. In reality, it was a Japanese National Policy Company. 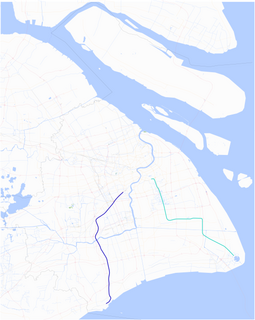 Shanghai Metropolitan Area Intercity Railway System or Shanghai Suburban Railway System is a network of regional railways radiating or surrounding the city of Shanghai, China. It is a plan for the gradual implementation of a regional rail system across the metropolitan area. The system will eventually connect with Jiangsu Yangtze MIR and Hangzhou Greater Bay Area network.