Tianjin Airlines Flight 7554 (Chinese :天津航空公司GS7554; pinyin :Tiānjīn Hángkōng Gōngsī GS7554) was a scheduled passenger flight between Hotan and Ürümqi in China's Xinjiang Autonomous Region. [1] The aircraft operating this route on 29 June 2012, an Embraer 190, took off from Hotan at 12:25 pm; within ten minutes, six ethnic Uyghur men, one of whom allegedly professed his motivation as jihad, announced their intent to hijack the aircraft, according to multiple witnesses. In response, passengers and crew resisted and successfully restrained the hijackers, who were armed with aluminium crutches and explosives.

The aircraft turned around and landed at 12:45 pm back in Hotan, where 11 passengers and crew and two hijackers were treated for injuries. Two hijackers died from injuries from the fight on board. The Xinjiang government classified the incident as terrorism. The Civil Aviation Administration of China (CAAC) reviewed Hotan airport's security measures and airport security was escalated in Xinjiang. The incident marked the first serious hijacking attempt in China since 1990, and the first fatal hijacking or attempted hijacking since the September 11 attacks.

Hotan is a city with over 360,000 residents, over 97% of them ethnic Uyghur, [2] and is renowned for its Uyghur culture. [3] Ürümqi, over 610 miles (980 km) away, is the comparatively modern capital of the region and holds three million residents. [3] Half the population of Xinjiang as a whole is Uyghur. [4] In September 2011, courts had tried and convicted four people for separatist attacks in Hotan and nearby Kashgar that had killed 32 people. [5] The hijacking took place close to the anniversary of the 5 July 2009 Ürümqi riots which killed 200 people. [2] [6]

Terrorism in China by Uyghur separatists usually features attacks on police stations and civilians; aircraft hijacking is a recent innovation in Uyghur militants' tactics. [3] China has maintained a good aviation safety record, although there has been a history of security threats to aircraft in Xinjiang, mirroring the general violence in the region. Flights from Xinjiang to Afghanistan were grounded in 2008 and 2009 when passengers were discovered to have smuggled explosives on board. [5] [7] The last successful airplane hijacking in China was Xiamen Airlines Flight 8301 on 2 October 1990, where a Hunanese man armed with explosives attempted to defect to Taiwan. [3]

The Embraer 190 jet was leaving on its daily route from Hotan Airport to Ürümqi Diwopu International Airport at 12:25 pm (04:25 Greenwich Mean Time) with 92 passengers and nine crewmembers. [8] [9] The hijackers, six Uyghur men aged 20–36 from the city of Kashgar, boarded the aircraft normally. [6] [10] Surveillance video showed them feigning disability to bypass airport security; one suspect hid his aluminum pipe weapon inside his crutch. [11] The hijackers donned staff uniforms [8] and split into two parties of three in the front and back of the plane. [7] One of the suspects said they aimed to fly the aircraft out of the country to wage holy war; [11] China has previously raised concerns that Uyghur militants are linking up to their Islamist counterparts in Pakistan. [5]

According to the flight captain, sounds of screaming and fighting emerged from inside the plane at 12:32 pm and 5,700 metres (18,700 ft) above ground. [12] The three hijackers in front were attempting to break down the door to the cockpit, according to the China Daily , injuring a flight attendant who resisted them. [13] Witnesses note that the attackers were armed with the sharp ends of a disassembled aluminum crutch. [6] Simultaneously, the three men in the back brandished metal bars and explosives, beating seated passengers while announcing "whoever stands up will die". [13]

Upon hearing this declaration of intent, Fu Huacheng, a passenger and the minister of education for Lop County, recalled running out of his seat and shouting in Uyghur to his fellow passengers: "Come on! Let's stand up and fight them." [13] Up to six mostly Uyghur plainclothes police responded to Fu's call; [10] [13] microbloggers confirmed witnessing plainclothes policemen removing homemade explosives from the suspects. [3] A group of passengers, led by a local doctor, escorted the elderly and children away from the violence. [11] Some passengers successfully activated the mid-air anti-hijacking contingency plan, which involves pushing a trolley in front of the cockpit door. [12] A passenger interviewed by the Associated Press confirmed that passengers used their belts to restrain the attackers; [6] witnesses to the hijacking posted bloody pictures of the arrests on Sina Weibo. [5]

When the captain heard confirmation from a flight attendant that the events in the cabin were indeed an attempted hijacking and not just a fight, he turned the aircraft back to Hotan. [11] The jet returned safely at Hotan Airport at 12:45 pm. [12] The Civil Aviation Administration of China reported that seven passengers, two security officers, and two flight attendants sustained injuries from the fighting. [14] In addition, two of the hijackers (identified as Ababaykeri Ybelayim and Mametali Yvsup) died from injuries on board; [15] another two of the four detained were taken to the hospital due to self-mutilation. [10]

On its website, the Xinjiang government called the incident "a serious and violent terrorist attack", [10] while Chinese national media called the hijackers "gangsters" and "scoundrels" but refrained from the "terrorist" label. [3] The separatist World Uyghur Congress reacted to the news by claiming variously that the incident was wholly "fictitious" [16] or that it was simply a dispute between ethnic majority Han and Uyghurs over airline seats. [9] The WUC further issued a statement saying, "We warn China not to use this incident as another excuse for crackdown". [6] U.S.-based Investor's Business Daily (IBD) criticized the WUC's denial of the incident, citing "an awful lot of cell phone photographs of the incident and Chinese witness accounts to suggest a hijack attempt". [17] The IBD suggested that the incident as a whole was not favorable to the Chinese government because "the real story is that the hero is no longer the state, but ordinary Chinese." [17]

On 3 July, the Xinjiang government awarded $16,000 each to 10 passengers who fought the hijackers, to reward their bravery. [18] Also, the whole aircrew of the flight was awarded 500,000 yuan by the Xinjiang government. [19] The flight crewmembers were rewarded 1 million yuan ($157,000) by the CAAC for their bravery. Two security members on board the flight, Du Yuefeng and Xu Yang, and flight attendant Guo Jia, were named heroes by China's civil aviation authorities. [20]

Three of the surviving terrorists, Musa Yvsup, Arxidikali Yimin, and Eyumer Yimin, were sentenced to death after they pleaded guilty on Tuesday 11 December 2012. [21] Alem Musa, who also participated in the hijacking attempt but did little compared to the others, also pled guilty and was sentenced to lifelong imprisonment by Intermediate People's Court in Hotan Prefecture. [15]

Aircraft hijacking is the unlawful seizure of an aircraft by an individual or a group. Dating from the earliest of hijackings, most cases involve the pilot being forced to fly according to the hijacker's demands. However, in rare cases, the hijackers have flown the aircraft themselves and used them in suicide attacks – most notably in the September 11 attacks – and in several cases, planes have been hijacked by the official pilot or co-pilot; i.e., the Lubitz case.

Hotan is a major oasis town in southwestern Xinjiang, an autonomous region in Western China. The city proper of Hotan broke off from the larger Hotan County to become an administrative area in its own right in August 1984. It is the seat of Hotan Prefecture.

Malaysian Airline System Flight 653 (MH653) was a scheduled domestic flight from Penang to Kuala Lumpur in Malaysia, operated by Malaysian Airline System (MAS). On the evening of 4 December 1977, the Boeing 737-200 aircraft flying the service crashed at Tanjung Kupang, Johor, Malaysia, while purportedly being diverted by hijackers to Singapore. It was the first fatal air crash for Malaysia Airlines, with all 93 passengers and 7 crew killed. The flight was apparently hijacked as soon as it reached cruise altitude. The circumstances in which the hijacking and subsequent crash occurred remain unsolved. 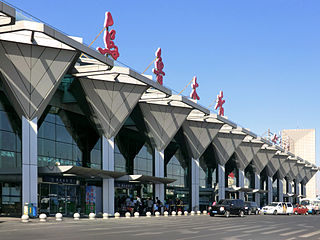 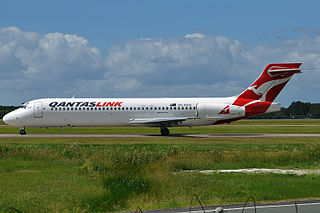 Qantas (QantasLink) Flight 1737 was an afternoon Australian domestic flight from Melbourne Airport to Launceston Airport, which was subject to an attempted hijacking on 29 May 2003. 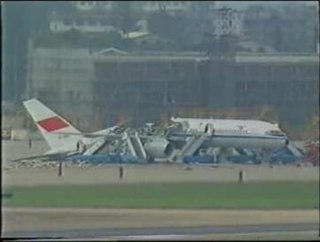 On October 2, 1990, a hijacked Boeing 737, operating Xiamen Airlines Flight 8301, collided with two other aircraft on the runways of the old Guangzhou Baiyun International Airport, while attempting to land. The hijacked aircraft struck a parked China Southwest Airlines Flight 4305 first, inflicting only minor damage, but then collided with China Southern Airlines Flight 3523, a Boeing 757 waiting to take off, flipping onto its back. A total of 128 people were killed, including seven of nine crew members and 75 of 93 passengers on Flight 8301 and 46 of 110 passengers on Flight 3523. 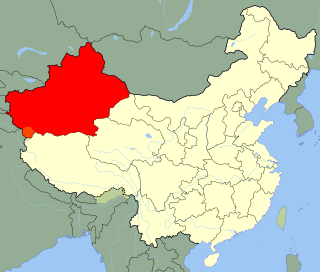 The 2008 Uyghur unrest is a loose name for incidents of communal violence by Uyghur people in Hotan and Qaraqash county of Western China, with incidents in March, April, and August 2008. The protests were spurred by the death in police custody of Mutallip Hajim.

The July 2009 Ürümqi riots were a series of violent riots over several days that broke out on 5 July 2009 in Ürümqi, the capital city of the Xinjiang Uyghur Autonomous Region (XUAR), in Northwestern China. The first day's rioting, which involved at least 1,000 Uyghurs, began as a protest but escalated into violent attacks that mainly targeted Han people. China's People's Armed Police were deployed and two days later hundreds of Han people clashed with both police and Uyghurs. PRC officials said that a total of 197 people died, most of whom were Hans, with 1,721 others injured and many vehicles and buildings destroyed. Many Uyghurs disappeared during wide-scale police sweeps in the days following the riots; Human Rights Watch (HRW) documented 43 cases and said figures for real disappearances were likely to be much higher. 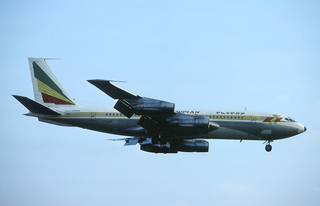 Ethiopian Airlines Flight 708 was a Boeing 720-060B, due to operate an international scheduled Addis Ababa–Asmara–Athens–Rome–Paris passenger service, that experienced a hijacking attempt on 8 December 1972.

The 2011 Hotan attack was a bomb-and-knife attack that occurred in Hotan, Xinjiang, China on July 18, 2011. According to witnesses, the assailants were a group of 18 young Uyghur men who opposed the local government's campaign against the burqa, which had grown popular among older Hotan women in 2009 but were also used in a series of violent crimes. The men occupied a police station on Nuerbage Street at noon, killing two security guards with knives and bombs and taking eight hostages. The attackers then yelled religious slogans, including ones associated with Jihadism, as they replaced the Chinese flag on top of a police station with another flag, the identity of which is disputed.

On the early morning of Wednesday, 30 July 2014, Juma Tahir, the imam of China's largest mosque, the Id Kah Mosque in northwestern Kashgar, was stabbed to death by three young male Uyghur extremists. Religious leaders across denominations condemned the attack.

Urumqi Air is a low-cost airline headquartered in Ürümqi, Xinjiang Uyghur Autonomous Region, People's Republic of China. It operates scheduled passenger services. Its main hub is Ürümqi Diwopu International Airport in Ürümqi. The airline is one of the four founding members of the U-FLY Alliance. As of 2019, the airline exceeded eight million passengers and has operated an accumulated 150,000 flight hours. 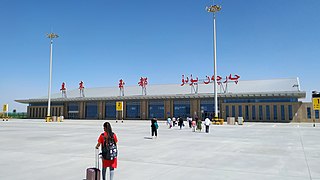 Qiemo Yudu Airport is an airport that serves Qiemo Town in Xinjiang Uyghur Autonomous Region, China. Located roughly 13 kilometres (8.1 mi) northwest of the town, the airport has a 4,500-square-metre (48,000 sq ft) terminal and a runway that measures 2,800 metres (9,200 ft). It replaced another airport serving the town, which has a shorter runway, on 19 December 2016. China Southern Airlines offers flights to Ürümqi via Korla.