The area was created in late 1984. Since 1997, the Ministry of Commerce (MOFCOM, the former Ministry of Economy and Foreign Trade) started a comprehensive appraisal on investment environment of all national-level development zones which covers eight major indicators like overall economic strength, infrastructure, operation cost, human resources and supply, society and environment, facilitation for technology innovation, management system building, and development and efficiency. For 12 years in a row, TEDA topped the list. It is a leading investment spot and the Asia-Pacific at large. [1]

TEDA, pronounced nearly the same in Mandarin Chinese, is a vast area by the seaside. It contains a port, business buildings, urban residential areas, and an extensive transportation network. TEDA also contains the TEDA Football Stadium, used by Tianjin's football team, Tianjin Teda FC. The stadium was finished in 2004.

The area's largest bridge is the Haihe toll bridge.

TEDA is also home to the Tianjin TEDA Maple Leaf International School (TTMLIS), formerly called Harbor View School. TTMLIS is a member of Maple Leaf Education Systems, whose flagship school is located in the Dalian Development Area of the city of Dalian, Liaoning. [6]

Tingyi (Cayman Islands) Holding Corporation has its corporate headquarters in the TEDA. [7]

Tianjin, historically romanized as Tientsin, is a municipality and a coastal metropolis in Northern China on the shore of the Bohai Sea. It is one of the nine national central cities in Mainland China, with a total population estimated at 15,621,200 in 2016. Its built-up area, made up of 12 central districts, was home to 12,491,300 inhabitants in 2016 and is also the world's 29th-largest agglomeration and 11th-most populous city proper. 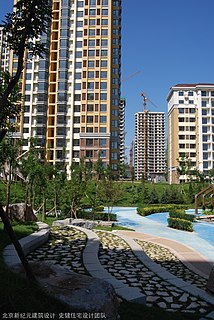 Guangzhou Economic and Technological Development District is one of the first national economic development zones in China.

Guangzhou Nansha Economic and Technological Development Zone is a national economic development zone in China, which was established in 1993. It is located at Nansha District, the southeast of Guangzhou, and on the west bank of Humen Watercourse in the estuary of the Pearl River. It has a developed area of 17.67 square kilometres.

Xihai'an, officially known as Xihai'an New Area, also known as Qingdao West Coast is a district of Qingdao, Shandong, China, located southwest and west of the main urban area of the city on the western shore of Jiaozhou Bay. It was identical to Qingdao Economic and Technological Development Zone, which was launched in 1985 after the zone was merged with Huangdao District and set up the Free Trade Zone in 1992. In December 2012, neighbouring Jiaonan City was merged into Huangdao.

Xi'an Economic and Technological Development Zone is a state-level economic development zone in Xi'an, Shaanxi, China. The zone was established in 2000. It is located at North Gate of Xi'an with its developed area of 4.9 square kilometres.

Changsha Economic and Technological Development Zone (CETZ) is an economic and technical development zone at state level in Changsha, Hunan, China. The zone was established in August 1992, its old name was Xingsha Development Zone of Changsha, changed to the present name on 29 March, 1994. CETZ was upgraded to an economic and technical development zone at state-level in February, 2000. The headquarters for CETZ is situated in Xingsha in the eastern suburb of Changsha, including Xingsha, Langli and Huanghua 3 Industrial parks, its planning area covers 105 km2 (41 sq mi).

Huizhou Daya Bay Economic and Technological Development Zone is state-level economic development zone in 1993. The zone has a developed area of 6.98 square kilometres. It is situated in the north-eastern part of Daya Bay, located in Huizhou, Guangdong, facing the South China Sea and Shenzhen. The pillar industries include electronic and information, metals, energy, paper, petrochemical and warehousing.

Ningxiang Economic and Technological Development Zone is an economic and technical development zone (ETZ) in Ningxiang City, Hunan Province, China, one of four ETZs at state level in Changsha. It is the original Ningxiang Private Economy Industrial Park created on 16 February, 1998, renamed to Ningxiang Technological Industrial Park in March, 2000. On 4 November, 2002, it was formally renamed to the present name, and approved to an ETZ at provincial level. On 11 November, 2010, it was upgraded to an ETZ at state level. As of 2016, its builtup area covers 25 km2 (9.7 sq mi), the total gross output of scale-sized industries hits 97.07 billion yuan.

Wangcheng Economic and Technological Development Zone is an economic and technical development zone (ETZ) in Wangcheng District of Changsha City, Hunan Province, China, one of four ETZs at state level in Changsha. It was established on 13 July 2000, its old name is the High - Tech Food Industrial Base of Hunan Province, similar to a development zone at provincial level; renamed to the present name in 21 July 2006. It was upgraded to an ETZ at state level on 15 February 2014.

The Shihezi Economic and Technological Development Zone is an economic and technical development zone at national level located in the eastern suburbs of Shihezi City, Xinjiang Uygur Autonomous Region, China. It is situated east to Hetan Road (河滩路), west to the Dongsi and Dongqi Roads (东七路), south to the Northern Xinjiang railway, north to G312 National Highway, the total planning area is 11.2 square kilometers.