Tianjin Eye, the official name The Tientsin Eye, is a 120-meter (394 ft)-tall giant ferris wheel built above the Yongle Bridge (formerly Chihai Bridge), over the Hai River in Tianjin, China.

Tianjin Eye, also called "The Tientsin Eye" is electrically powered and has 48 passenger capsules, each able to carry 8 passengers, and takes 30 minutes to complete a rotation, giving a maximum capacity of 768 passengers per hour. [5] 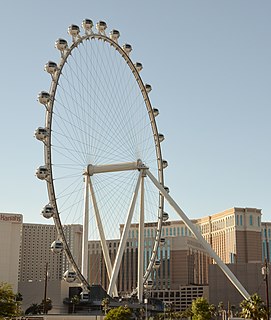 A Ferris wheel is an amusement ride consisting of a rotating upright wheel with multiple passenger-carrying components attached to the rim in such a way that as the wheel turns, they are kept upright, usually by gravity. Some of the largest modern Ferris wheels have cars mounted on the outside of the rim, with electric motors to independently rotate each car to keep it upright. These wheels are sometimes referred to as observation wheels and their cars referred to as capsules. However, these alternative names are also used for wheels with conventional gravity-oriented cars. 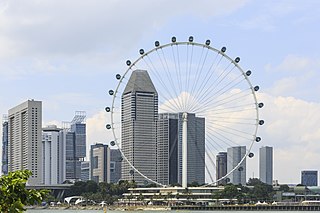 The Singapore Flyer is a 165-metre tall giant ferris wheel at Downtown Core, Singapore which was officially opened on 15 April 2008, with construction having taken about 2½ years. It has 28 air-conditioned capsules, each able to accommodate 28 passengers, and incorporates a three-story terminal building.

The Melbourne Star is a 120 metre tall Ferris wheel in the Waterfront City precinct in the Docklands area of Melbourne, the state capital of Victoria, Australia.

Eye on Malaysia was a transportable Ferris wheel installation in Malaysia. It began operating in Kuala Lumpur in 2007, and was then moved to Malacca in 2008, where it operated until 2010.

The Beijing Great Wheel, a 208-metre (682 ft) tall giant Ferris wheel, was to have been constructed in eastern Beijing's Chaoyang Park, one of the 2008 Summer Olympics venues. If it had been built, it would have become the world's tallest Ferris wheel, superseding the 165 m (541 ft) Singapore Flyer.

The Great Berlin Wheel was a giant Ferris wheel to be built near the Berlin Zoological Garden in Berlin, Germany, by the Great Wheel Corporation. 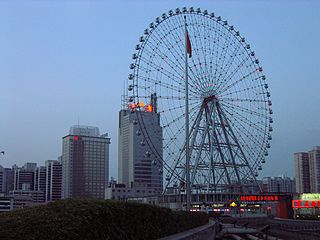 Changsha Ferris Wheel is a 120-meter (390 ft)-tall giant Ferris wheel in Changsha, Hunan, China that has a diameter of 99 meters (325 ft). It is adjacent to Helong Stadium.

Suzhou Ferris Wheel is a 120-metre (394 ft) tall giant Ferris wheel on the east bank of Jinji Lake in Suzhou, Jiangsu, China. It has 60 passenger cabins, a maximum capacity of 300 passengers, and takes approximately 20 minutes to complete each revolution.

Kolkata Eye was the proposed name for a giant Ferris wheel which it was hoped would be constructed in Kolkata, West Bengal, India. It was announced in 2011, and in May 2014 Mamata Banerjee, Chief Minister of West Bengal, stated "[it] is expected to be ready in a year's time", but it was never built.

The New York Wheel was a proposed 630-foot (190 m) Ferris wheel to be located at St. George in Staten Island, New York City, next to the proposed Empire Outlets retail complex. 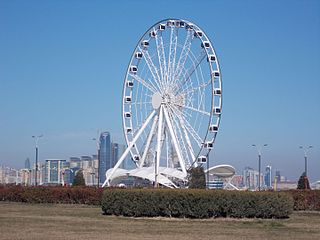 Baku Ferris Wheel, also known as the Baku Eye and Devil's Wheel, is a ferris wheel on Baku Boulevard in the Seaside National Park of Baku, capital of Azerbaijan.The wheel was built by the Dutch company Dutch Wheels. It was opened 10 March 2014 by Azerbaijani president Ilham Aliyev, and opened to the public two days later. 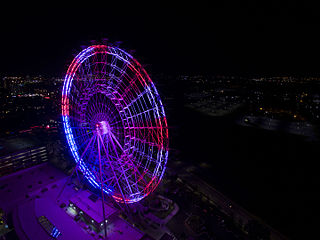 The Wheel at ICON Park Orlando is a 400 ft (122 m) tall giant ferris wheel in Orlando, Florida, United States. Opening under the name Orlando Eye, it opened on April 29, 2015. The wheel was reported to be in the early stages of planning in March 2011, at which point it was proposed for completion in mid-2014, but the opening date was subsequently delayed to late 2014 and then to early 2015. 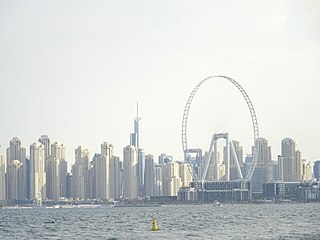 Ain Dubai is the world’s largest and tallest observation wheel located on Bluewaters Island, near the Dubai Marina in Dubai, United Arab Emirates.