Tianjin No.20 High School was formally established in July 1952. It is located in Heping District in Tianjin.

Tianjin Binhai International Airport is an airport located in Dongli District, Tianjin. It is one of the major air cargo centers in the People's Republic of China.

Tianjin preserved vegetable is a type of pickled Chinese cabbage originating in Tianjin, China. It consists of finely chopped Tianjin cabbage and salt. Garlic is also generally added in the pickling process, although it is omitted in versions prepared for consumption by members of certain Chinese Buddhist sects, who practice strict Buddhist vegetarianism and do not consume garlic or other spicy foods. This pickled vegetable is used to flavor soups, stir fries or stewed dishes.

The women's association football tournament at the 2008 Summer Olympics was held in Beijing and four other cities in China from 6 to 21 August. Associations affiliated with FIFA were invited to send their full women's national teams.

Wu Changshun is the former police chief of the municipality of Tianjin, China. Wu is also an inventor, and has 35 patents and utility models to his credit. Wu spent 44 years working for the Tianjin Public Security Bureau and was the chief of the police force for some eleven years. Wu was dismissed from office in July 2014, and was placed under investigation by the Communist Party's anti-corruption agency. He was expelled from the party in February 2015. 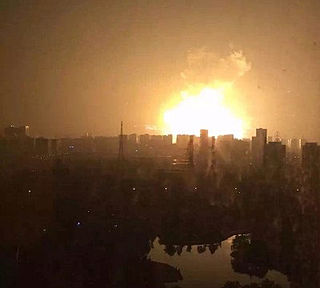 On August 12, 2015, a series of explosions killed, according to official reports, 173 people and injured hundreds of others at a container storage station at the Port of Tianjin. The first two explosions occurred within 30 seconds of each other at the facility, which is located in the Binhai New Area of Tianjin, China. The second explosion was far larger and involved the detonation of about 800 tonnes of ammonium nitrate. Fires caused by the initial explosions continued to burn uncontrolled throughout the weekend, resulting in eight additional explosions on 15 August. Of the 173 fatalities, 104 were firefighters.