Tianjin No. 3 Middle School is located on Xiangdong Road in Hongqiao District of Tianjin, China. The school was established in 1901 and is the oldest modern public middle school in Tianjin. The school had various names over the years, including Bell Tower Middle School. In 1982, UNDP and UNESCO provided the school with new equipment. 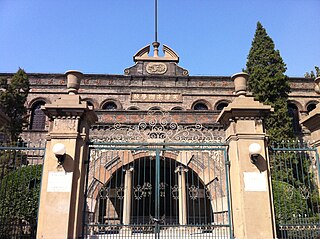 Tianjin Nankai High School is an elite college-preparatory high school in Tianjin, China. This is the original Nankai High School, and it is often referred to as Nankai High School in Tianjin to differentiate it from Chongqing Nankai Middle School, its sister school in Chongqing. Nankai is notable as one of the first modern secondary schools in China, and boasts several of the most notable men in modern Chinese history as its alumni. The main campus is located on 22 Nankai 4th Rd, Nankai Qu, Tianjin Shi, China. The other two campuses are in Sino-Singapore Tianjin Eco-city and Haihe Jiaoyu Yuanqu, Tianjin.

Gao Lingwen (1862–1945) was a famous scholar and writer from the city of Tianjin (Tientsin), China. He was the founder and principal of the first modern high school of Tianjin, the Bell Tower Middle School (铃铛阁中学), and the elder brother of China's acting President Gao Lingwei, of the Beiyang Government. 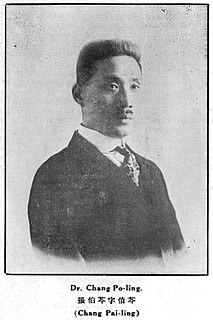 Tianjin No. 7 Middle School was founded in 1951, and was one of the earliest key high schools in Tianjin. It is a state model high school which employs 8 special-grade teachers, 3 Hedong District famous teachers.

Hedong District is located at the heart of the municipality of Tianjin, People's Republic of China. Its name literally means "east of the river", referring to its location east of the Hai River. Parts of the district were once part of the Russian Concession during the colonial period in the early 20th Century. Hedong District hosts Tianjin Railway Station, Tianjin Customs House and General Mail Office of Tianjin. It also hosts Tianjin Conservatory of Music and Tianjin Polytechnic University.

Wu Changshun is the former police chief of the municipality of Tianjin, China. Wu is also an inventor, and has 35 patents and utility models to his credit. Wu spent 44 years working for the Tianjin Public Security Bureau and was the chief of the police force for some eleven years. Wu was dismissed from office in July 2014, and was placed under investigation by the Communist Party's anti-corruption agency. He was expelled from the party in February 2015.

Yin Hailin is a former Chinese politician, and Vice-mayor of Tianjin, a municipality of China. He was dismissed from his position in August 2016 for investigation by the Central Commission for Discipline Inspection. 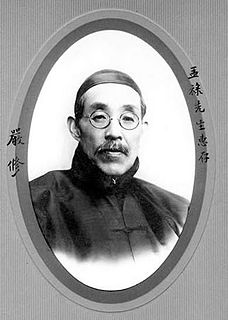 Yan Xiu, also known as Yan Fansun, was a Chinese educator who, with Zhang Boling, founded Nankai University and the Nankai system of schools.