Kimchi, a staple food in Korean cuisine, is a traditional side dish of salted and fermented vegetables, such as napa cabbage and Korean radish, made with a widely varying selection of seasonings, including gochugaru, spring onions, garlic, ginger, and jeotgal, etc. It is also used in a variety of soups and stews. It is eaten as a side dish with almost every Korean meal. 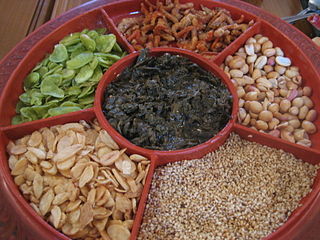 Burmese cuisine encompasses the diverse regional culinary traditions of Myanmar, which have developed through longstanding agricultural practices, centuries of sociopolitical and economic change, and cross-cultural contact and trade with neighboring countries at the confluence of South Asia, Southeast Asia, and East Asia, including India, China, and Thailand. 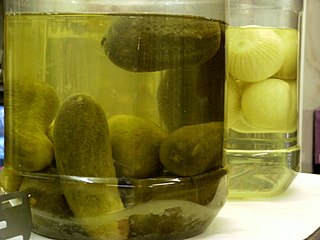 Pickling is the process of preserving or extending the shelf life of food by either anaerobic fermentation in brine or immersion in vinegar. The pickling procedure typically affects the food's texture and flavor. The resulting food is called a pickle, or, to prevent ambiguity, prefaced with pickled. Foods that are pickled include vegetables, fruits, meats, fish, dairy and eggs. 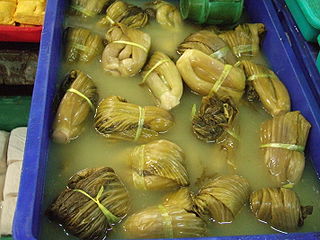 Suancai is a traditional Chinese pickled Chinese cabbage or Chinese mustard, used for a variety of purposes. Suancai is a unique form of paocai, due to the ingredients used and the method of production.

Shandong cuisine, more commonly known in Chinese as Lu cuisine, is one of the Eight Culinary Traditions of Chinese cuisine and one of the Four Great Traditions. It is derived from the native cooking style of Shandong Province, a northern coastal province of China.

Guizhou cuisine, or Qian cuisine, consists of cooking traditions and dishes from Guizhou Province in southwestern China. Guizhou cuisine shares many features with Sichuan cuisine and Hunan cuisine, especially in bringing the sensation of spiciness and pungency. What makes Guizhou cuisine unique is the emphasis of a mixed sour-and-spicy taste, as compared to the numbing-and-hot sensation featured in Sichuan cuisine and the dry-hot taste featured in Hunan cuisine. There is an ancient local saying, "Without eating a sour dish for three days, people will stagger with weak legs". The saying reflects how Guizhou people love local dishes with a sour taste. The combination of sour and spicy flavours is also found in Shaanxi cuisine. Guizhou cuisine differs from Shaanxi cuisine in that it lacks the emphasis on the salty taste, which is a common trait found in most northern Chinese cuisines. In addition, the unique sourness featured in Guizhou cuisine comes from the local tradition of fermenting vegetables or grains, and not from using vinegar products. 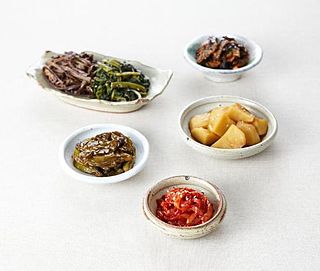 Banchan or bansang is a collective name for small side dishes served along with cooked rice in Korean cuisine. As the Korean language does not distinguish between singular and plural grammatically, the word is used for both one such dish or all of them combined. 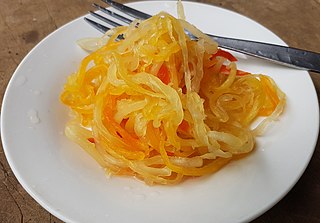 Atchara, is a pickle made from grated unripe papaya popular in the Philippines. This dish is often served as a side dish for fried or grilled foods such as pork barbecue.

A pickled cucumber is a cucumber that has been pickled in a brine, vinegar, or other solution and left to ferment for a period of time, by either immersing the cucumbers in an acidic solution or through souring by lacto-fermentation. Pickled cucumbers are often part of mixed pickles.

Jangajji (장아찌) or pickled vegetables is a type of banchan made by pickling vegetables. Unlike kimchi, jangajji is non-fermented vegetables, usually pickled in soy sauce, soybean paste, or chili paste. Jangajji dishes are usually preserved for a long period of time, and served with a drizzle of sesame oil. Preserved foods like jangajji were developed to attain a certain level of vegetable consumption during the long, harsh winters on the Korean peninsula.

Chinese pickles or Chinese preserved vegetables consist of various vegetables or fruits that have been fermented by pickling with salt and brine, or marinated in mixtures based on soy sauce or savory bean pastes. The former is usually done using high-fiber vegetables and fruits, such as Chinese cabbage, carrot, apple and pineapple, while the latter marinated group is made using a wide variety of vegetables, ranging from mustards and cucumbers to winter melon and radishes. As of now, there are more than 130 kinds of pickles.

Mohnyin Tjin, is a popular Burmese cuisine fermented food dish of vegetables preserved in rice wine and various seasonings. It is similar to Korean Kimchi and Japanese Takana Tsukemono. Mohnyin Tjin is popularly associated with the Shan and is a ubiquitous condiment for Shan dishes such as meeshay and shan khauk swè. 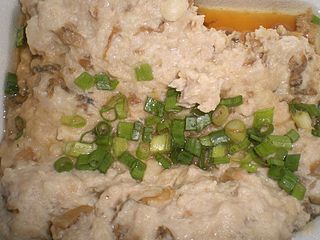 Steam minced pork refers to a savory dish popular in Hong Kong and the Guangdong area of China. It mainly composes with minced pork and usually mixes with other ingredients such as dried squid (土魷) and preserved cabbage (梅菜). It is cooked by steaming over a pot of boiling water until it is well cooked. The seasonings usually include soy sauce, salt, sugar and corn flour and occasionally white pepper and sesame oil. It is usually served with rice during lunch or dinner. 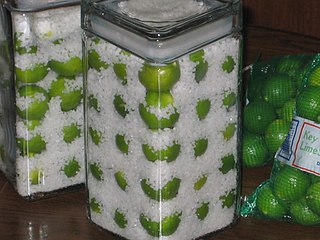 Zha cai is a type of pickled mustard plant stem originating from Chongqing, China. The name may also be written in English as cha tsai, tsa tsai, jar choy, jar choi, ja choi, ja choy, or cha tsoi. In English, it is commonly known as Sichuan vegetable, Szechwan vegetable, or Chinese pickled vegetable, although all of these terms may also refer to any of a number of other Chinese pickles, including the several other types in the Sichuan province itself. 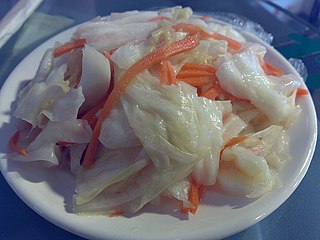 Pao cai, also known as Chinese pickles, Chinese sauerkraut, or pickled cabbage, is type of traditional Chinese fermented vegetables, which typically use different vegetables as raw materials. The different vegetables are then fermented in an anaerobic jar which contains a special pao cai brine. To improve the flavours and create antibacterial effects, garlic, ginger, chilli, onion and cloves can be added during the process of pickle fermentation. Pao cai often found in Chinese, and particularly Sichuan cuisine. It is most commonly found in northern and western China; however, there is also a unique form of pao cai, called suan cai, which is prominent in Northeastern China. It is often eaten with congee as a breakfast food. There exists more than 11 types of pao cai in China.