Tianlong Hotel is a cancelled [2] 330 m (1,080 ft) hotel skyscraper which was planned to have 73 storeys, in the Nanan District of Chongqing, China.

Tianlong is a flying dragon in Chinese mythology, a star in Chinese astrology, and a proper name.

Marina 101 is a skyscraper in Dubai, United Arab Emirates, located in the Dubai Marina district. Standing 101 stories high and 425 m (1,394 ft) tall, it is the second tallest building in the United Arab Emirates, behind only the Burj Khalifa. As of 2020, Marina 101 is also the 30th-tallest building in the world. It was officially opened in 2016, but construction wasn't fully completed until late 2017. The building was designed by National Engineering Bureau and construction was by Turkish conglomerate TAV Construction. 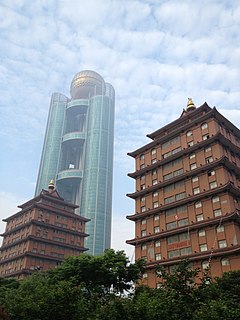 The Longxi International Hotel or Hanging Village of Huaxi is a late-modernist-futurism supertall skyscraper in Jiangyin, Wuxi, Jiangsu, China. The mixed-use tower began construction in 2008 and completed in 2011. The building rises 328 m (1,076 ft) with 74 stories. The skyscraper includes a glass sphere at the very top. The opening of the Longxi International Hotel was on 12 October 2011.

Etihad Towers is a complex of buildings with five towers in Abu Dhabi, the capital city of the United Arab Emirates.