Last updated April 04, 2022
Not to be confused with Tiananmen Square.
County-level & Sub-prefectural city in Hubei, People's Republic of China

It is on the Jianghan Plain, on the west side of Wuhan (the biggest city of Central China, as well as the capital of Hubei) and the east of Jingzhou (a famous city in Chinese history). Formerly known as Jingling (竟陵), it was renamed to Tianmen in 1726 during the Qing dynasty. The name comes from the Sky Gate Mountains (meaning “tianmen” in Chinese) which lie northwest of the city. [2]

It is the hometown of Lu Yu, the writer of The Classic of Tea , who is respected as "the Sage of Tea" for his contribution to the tea culture. Tianmen has the largest population among the same-level cities in Central China. It was honoured "National Civilized City" by Chinese government in 2014.

Prehistoric ancient settlements in the Tianmen area existed at least 7,000 to 8,000 years ago as evidenced by Shijiahe neolithic tribal ruins which include recent discoveries of stone (jade) devices, pottery, bone, mussels, as well as bronze articles and other artifacts, such as those in the original Tao Zu patrilineal cultural heritage period. [2] 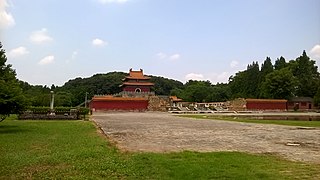 Zhongxiang is a county-level city of Jingmen, central Hubei province, People's Republic of China. The name Zhongxiang means "Blessed with propitious omen", and was given to the city by the Jiajing Emperor in the Ming dynasty.

Shishou is a county-level city under the administration of the prefectural-level city Jingzhou, in the south of Hubei province, near its border with Hunan province, and is located in the middle reaches of the Yangtze River. The Swan Islet Wetland of the Yangtze River in this area is the world's largest national natural reserve both for wild elks(Milu, or David Deer) and for Chinese river dolphins. The Shishou City National Baiji Reserve for Chinese river dolphins is nearby. It shares its name with a stream flowing into the Yangtze River. In addition, the area enjoys convenient transportation, with an hour's drive from Yueyang East Railway Station on the Beijing-Guangzhou high-speed railway line, and 70 kilometers (43 mi) from Jingzhou Railway Station on the Shanghai-Wuhan-Chengdu high-speed railway line. Moreover, Shishou boasts a diversified landscape, including mountains, hills, lakes, rivers, terraces and plains, as well as abundant resources such as rice, cotton, oil plants, eggs, fish, and lotus roots.

Guangshui is a city located in northeastern Hubei province, People's Republic of China, near the border with Henan province. Administratively, it is a county-level city of Suizhou City. Guangshui was known as Yingshan County before December 1988. 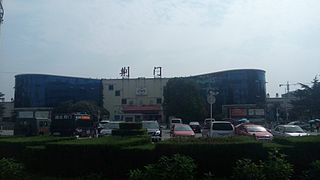 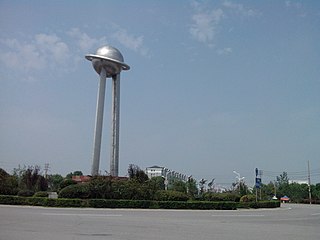 Hanchuan is a county-level city in east-central Hubei province, People's Republic of China. It is under the administration of Xiaogan prefecture-level city.