The Tianqi Emperor (23 December 1605 –30 September 1627),personal name Zhu Youjiao (Chinese :朱由校; pinyin :ZhūYóujiào),was the 16th Emperor of the Ming dynasty,reigning from 1620 to 1627. [2] He was the eldest son of the Taichang Emperor and a elder brother of the Chongzhen Emperor,who succeeded him. "Tianqi",the era name of his reign,means "heavenly opening". [3]

Zhu Youjiao became emperor at the age of 15,following the death of his father,the Taichang Emperor,who ruled less than a month. [3] He did not pay much attention to state affairs,and was accused of failing in his filial duties to his late father by not continuing the latter's wishes. It is possible that Zhu Youjiao suffered from a learning disability or something more. He was illiterate [3] and showed no interest in his studies. However,he was an outstanding carpenter and craftsman,often spending vast amounts of time on woodworking and instructing his servants to sell his creations undercover on the market just to see how much they were worth.

Because the Tianqi Emperor was unable to read court memorials and uninterested in state affairs,the court eunuch Wei Zhongxian [2] and the emperor's wet nurse Madam Ke seized power and controlled the Ming imperial court,with the Tianqi Emperor as merely a puppet ruler. [3] The Tianqi Emperor apparently devoted his time to carpentry. [2] Wei Zhongxian took advantage of the situation and began appointing the people he trusted to important positions in the imperial court. Meanwhile,Madam Ke sought to retain power by removing all other women from the emperor's harem by locking away the emperor's concubines and starving them to death. It is believed that he had two private palaces;one for his female lovers and one for his male lovers. [4]

One Confucian moralist group,the Donglin Movement,expressed distress at the conditions of the government. [5] In response,the imperial court,under Wei Zhongxian's control,covertly ordered the execution of a number of officials associated with the Donglin Movement. Living conditions worsened during the Tianqi Emperor's reign. The Ming dynasty also faced several popular uprisings.

The Tianqi Emperor died heirless on 30 September 1627 due to his only son having died in the Wanggongchang Explosion and was succeeded by his fifth and sole surviving brother,Zhu Youjian,because he had no sons to succeed him. Zhu Youjian was enthroned as the Chongzhen Emperor. As both the Tianqi Emperor's daughters died early too,it seems that there are no natural heirs from the emperor left alive.

Portrayals in the media

In August and September 2009, a 42-hour television series dramatising the events during the reign of the Tianqi Emperor was shown on Chinese television – two hours per night for 21 days. It vividly showed how a hereditary monarchy can lead to the rampant abuse of power. The series ended on 17 September, just two weeks before the 60th anniversary (five 12-year cycles) of the establishment of the People's Republic of China.

The Chenghua Emperor, personal name Zhu Jianshen, was the ninth Emperor of the Ming dynasty, who reigned from 1464 to 1487. His era name "Chenghua" means "accomplished change". 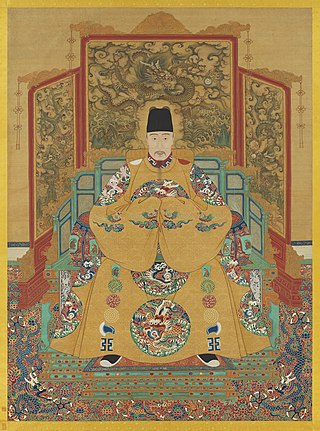 The Jiajing Emperor was the 12th Emperor of the Ming dynasty, reigning from 1521 to 1567. Born Zhu Houcong, he was the former Zhengde Emperor's cousin. His father, Zhu Youyuan (1476–1519), Prince of Xing, was the fourth son of the Chenghua Emperor and the eldest son of three sons born to the emperor's concubine, Lady Shao. The Jiajing Emperor's era name, "Jiajing", means "admirable tranquility". 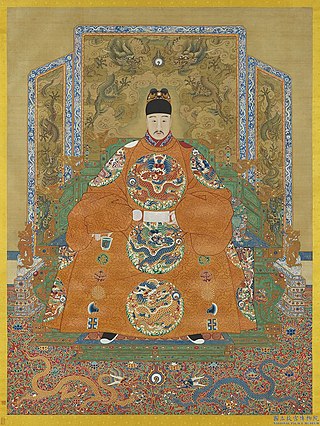 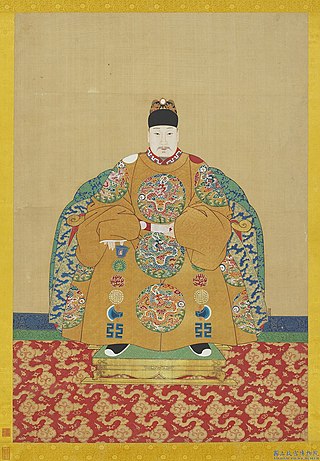 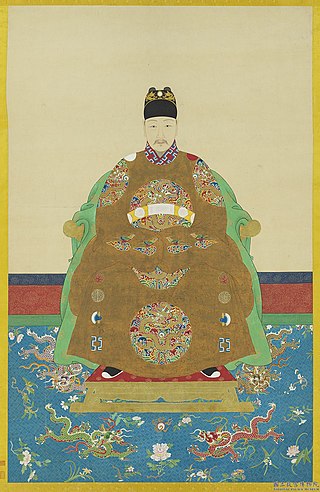 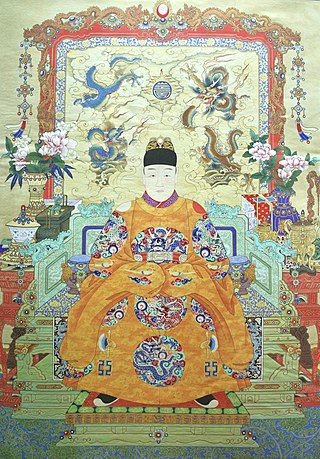 The Chongzhen Emperor, personal name Zhu Youjian, courtesy name Deyue (德約), was the 17th and last Emperor of the Ming dynasty. He reigned from 1627 to 1644. "Chongzhen," the era name of his reign, means "honorable and auspicious."

The Yongli Emperor, personal name Zhu Youlang, was a royal member to the imperial family of Ming dynasty, and the fourth and last commonly recognised emperor of the Southern Ming, reigning in turbulent times when the former Ming dynasty was overthrown and the Manchu-led Qing dynasty progressively conquered the entire China proper. He led the remnants of the Ming loyalists with the assistance of peasant armies to resist the Qing forces in southwestern China, but he was then forced to exile to Toungoo Burma and eventually captured and executed by Wu Sangui in 1662. His era title "Yongli" means "perpetual calendar".

Wei Zhongxian, born Wei Si (魏四), was a Chinese court eunuch who lived in the late Ming dynasty. As a eunuch he used the name Li Jinzhong (李进忠). He is considered by most historians as the most notorious eunuch in Chinese history. He is best known for his service in the court of the Tianqi Emperor Zhu Youjiao, when his power eventually appeared to rival that of the emperor. Mao Wenlong was one of the generals promoted by Wei Zhongxian. During Zhu Youjiao's reign, Wei would send the emperor's edicts to the Embroidered Uniform Guard led by prison director Xu Xianchun to purge corrupt officials and political enemies. Xu then arrested and demoted hundreds of officials and scholars from the Donglin movement, including Zhou Zongjian, Zhou Shunchang, and Yang Lian.

Emperor Zhenzong of Song, personal name Zhao Heng, was the third emperor of the Song dynasty of China. He reigned from 997 to his death in 1022. His personal name was originally Zhao Dechang, but was changed to Zhao Yuanxiu in 983, Zhao Yuankan in 986, and finally Zhao Heng in 995. He was the third son of his predecessor, Emperor Taizong, and was succeeded by his sixth son, Emperor Renzong at the end of his reign. From 1020 he was seriously ill, but retained power despite this. Because of his illness, day-to-day rule of China was often placed in the hands of his third wife, Empress Liu.

Empress Xiaojielie, of the Zhou clan, was a Chinese empress consort of the Ming dynasty, married to the Chongzhen Emperor. She is commonly referred to as Empress Zhou.

Empress Yi'an (1606–1644), of the Zhang clan, was the empress consort of the Tianqi Emperor of the Chinese Ming dynasty.

Consort Li may refer to:

Empress Dowager Xiaojing, of the Wang clan, was a Ming dynasty concubine of the Wanli Emperor and the biological mother of the Taichang Emperor. She was primarily known during her lifetime as Consort Gong, but is most commonly referred to by her posthumous name.

Noble Consort Zheng (1565–1630), was a Ming dynasty concubine of the Wanli Emperor. She is known for having been his most beloved consort and, in an attempt to please her, he tried to make her son his heir apparent. This act caused over a decade of conflict and factionalism in the imperial court.

Empress Dowager Xiaochun (1588–1615), of the Liu clan, was a Ming dynasty concubine of the Taichang Emperor and biological mother of the Chongzhen Emperor.

Zhu Changxun (1586–1641) was the third son of the Ming dynasty Wanli Emperor. His mother, Noble Consort Zheng, was a favoured concubine and, in efforts to please her, the emperor attempted to have Zhu made heir apparent, but failed to overturn the rule of primogeniture. After the fall of the Ming, however, Zhu's son, Zhu Yousong, became emperor of the Southern Ming.

Empress Xiaoyuanzhen (1580–1613), of the Guo clan, was the first wife of the Taichang Emperor when he was crown prince. She died before he ascended the throne, but is more commonly known by her posthumous name.

Empress Dowager Xiaohe, of the Wang clan, was a Ming dynasty consort of the Taichang Emperor and the biological mother of Tianqi Emperor.