Tianshan Town (Chinese :天山镇; pinyin :Tiānshān zhèn) is a town in Gaoyou County-level city, which in its turn is part of Yangzhou Prefecture-level city, in China's Jiangsu Province.

The town is located about 30 km southwest (straight-line distance) from Gaoyou central city, and about the same distance northwest from downtown Yangzhou.

Tianshan town has received its name from its best known natural feature, the Shenju Hill (神居山, literally "home of the spirits"; 32°39′40″N119°13′29″E﻿ / ﻿32.66111°N 119.22472°E﻿ / 32.66111; 119.22472 ), formerly known as "Tianshan" (literally, "heavenly mountain"). Although it is not tall (no more than 50 m above the sea level), [1] it is a basaltic extinct volcano, the only extinct volcano in Yangzhou Prefecture. The tomb of Liu Xu (刘胥), the ruler the Guangling state within the Han Empire, was located at the depth of 25 m inside the extinct volcano. The largely intact tomb was excavated by Chinese archaeologists in 1979–1980. Later, the tomb was re-created, with the original artifacts on display, in a purpose-built museum (Han Guangling Royal Tomb Museum, 汉广陵王墓博物馆) in Yangzhou. Although the original funeral jade shroud of Liu Xiu (d. 55 BCE) has been removed to the National Museum of China in Beijing, a full-scale replica is housed here.

Liubo is an ancient Chinese board game played by two players. For the rules, it is believed that each player had six game pieces that were moved around the points of a square game board that had a distinctive, symmetrical pattern. Moves were determined by the throw of six sticks, which performed the same function as dice in other race games.

Mawangdui is an archaeological site located in Changsha, China. The site consists of two saddle-shaped hills and contained the tombs of three people from the Changsha Kingdom during the western Han dynasty : the Chancellor Li Cang, his wife and a male believed to have been their son. The site was excavated from 1972 to 1974. Most of the artifacts from Mawangdui are displayed at the Hunan Provincial Museum. It was called "King Ma's Mound" possibly because it was (erroneously) thought to be the tomb of Ma Yin (853–930), a ruler of the Chu kingdom during the Five Dynasties and Ten Kingdoms period. The original name might have been the similarly-sounding "saddle-shaped mound".

The Tomb of the Jibei King is a tomb from the time of the Western Han Dynasty in Changqing District of Jinan, Shandong Province, China. It is also known as the Han Dynasty Tomb of Shuangru Mountain. The tomb is thought to have been the burial site of Liu Kuan, the last king of Jibei who ruled from 97–85BC during the time of the Emperor Wu of Han of the Western Han Dynasty. The tomb was a major archaeological find since it had been untouched by grave robbers. Its discovery was ranked among the top ten Chinese archaeological finds of 1996 by Chinese National Office for Cultural Artefacts.

Guangling County is in the northeast of Shanxi province, China. It is under the administration of Datong city. Guangling is a basin surrounded by Taihang Mountains. The temperature ranges from −34.0 to 38.2 °C, with an annual mean of 7.0 °C (44.6 °F). Guangling has nine township level divisions. Famous tourist attractions include: Temple of Water God (水神堂), Temple of Holy Spring (圣泉寺), Zhao Great Wall (赵长城). Local products include: papercut, millet, sunflower seeds, dry Tofu etc. 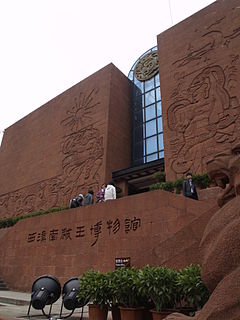 The Museum of the Western Han Dynasty Mausoleum of the Nanyue King houses the 2,000-year-old tomb of the Nanyue King Zhao Mo in Guangzhou. Zhao Mo ruled from 137 BC to 122 BC, and his tomb was discovered in downtown Guangzhou in 1983. The museum, which opened in 1988, showcases the tomb and its complete trove of artifacts. It was named a Major National Historical Site in 1996 and is renowned for its rare assemblage of funerary artifacts representing the diffusion of cultures throughout the Lingnan region during the Han dynasty.

Luoyang Ancient Tombs Museum is a museum presenting Chinese ancient tombs in Luoyang, in the Henan province of China.

Yangzhou Museum is the biggest museum in Yangzhou, an ancient city in Jiangsu Province of China. It is located in front of the Mingyue Lake on Yangzhou' West Wenchang Road, about 4 km west of downtown Yangzhou and Slender West Lake.

Cao Shui(simplified Chinese: 曹谁; traditional Chinese: 曹誰; pinyin: Cáo Shuí) born June 5, 1982, also known as Shawn Cao, courtesy name Yaou(Eurasian), pseudonym or haoLord of Tower of Babel, is a Chinese poet, novelist, screenwriter and translator. He is one of the representative figures of Chinese Contemporary Literature. He leads the great poemism movement. In his Declaration of Great Poem, he aims to integrate sacred and secular cultures, oriental and occidental cultures, ancient and modern cultures in Chinese literature. His most notable works include the Epic of Eurasia, Secret of Heaven (trilogy), and King Peacock. His works are dedicated to rebuilding a republic in which the whole humanity can live in freedom, which he always described as Eurasia, the Top of the Tower of Babel or Kunlun Mountains. So far twenty books of Cao Shui have been published, including five poem collections, three essay collections, ten novels and one hundred episodes TV series and films. He is a member of China Writers' Association, China Film Association, and China Poetry Society. He is also the editor-in-chief of Great Poem and deputy editor-in-chief of Poetry Weekly. Currently he lives in Beijing as a professional writer and screenwriter.

Jiang Ziwen was a wei of Moling county in China during the Eastern Han Dynasty.

Tomb of the King of Boni, built in the early 15th century, is the tomb of Manarejiana (麻那惹加那), ruler of Boni, a medieval state on the island of Borneo, considered by some as the predecessor of the present-day sultanate of Brunei but disputed by some researchers. The tomb and associated statuary is located in a park at the southern foothills of Tortoise Mountain (Guishan), about 3 km south of the southern gate of the walled city of Nanjing. The street address is No.9, Weijiu Road of Huacun; this is east of Tiexinqiao Subdistrict, in Yuhuatai District, Nanjing, Jiangsu province, China.

Yucheng Postal Stop, also called Yucheng Post is located in the Postal Lane outside the South Gate of Gaoyou, Jiangsu, China, west of the Grand Canal. It is currently the largest, and most completely preserved, ancient courier station in China, where couriers changed horses and rested. The stop has been listed in the fourth group of National Key Cultural Relics Protection Units since 1996. 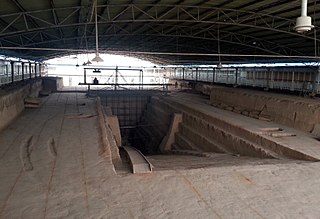 The Cao Cao Mausoleum, also known as the Gaoling Mausoleum of Wei and the Xigaoxue Tomb No. 2, is a tomb in Xigaoxue Village, Anfeng Township, Anyang County, Anyang City, Henan Province, China. It is purported to be the burial site of Cao Cao, a prominent warlord who lived in the late Eastern Han dynasty. The discovery of the tomb was reported on 27 December 2009 by the Henan Provincial Cultural Heritage Bureau. In 2013, the tomb became part of the seventh batch of Major Historical and Cultural Sites Protected at the National Level in China. 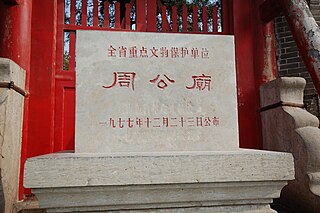 The Beijing Dabaotai Western Han Dynasty Mausoleum is a museum built over the tombs of Western Han dynasty prince Liu Jian and his wife at Dabaotai in Fengtai District of southwestern Beijing Municipality about 15 km (9.3 mi) southwest of Beijing's city centre. The two tombs are over 2,000 years old and were discovered in 1974. Also discovered in the vicinity are remnants of a residence from the Jin dynasty (1115–1234). 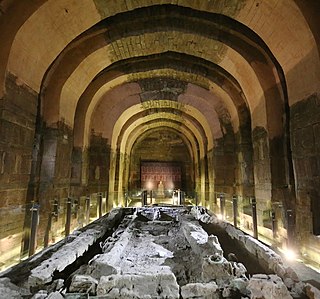 The Yongling Mausoleum, commonly known as the tomb of Wang Jian, is the burial place of Wang Jian (847–918), the founding emperor of Former Shu. It is located at 10 Yongling Road, Jinniu District, Chengdu, Sichuan, China.

Abakan Palace Ruins is a Chinese architecture styled palace located in Abakan, Khakassia, Russia dating back more than 2000 years ago to the Han dynasty. It was excavated by Russian archaeologists. The palace was administered by the Xiongnu and the Han dynasty in the old Jiankun region of China. It is around 1000km from the modern Buryat city of Ulan-Ude. Various other nomadic tribes have lived here like the modern Yenisei and ancient Dingling. Some believe it may be a palace for Li Ling and his Hun wife. Others contend it was actually Lü Fang's (卢芳) palace.