Tianwa Yang began learning to play the violin at age four, and quickly began winning violin competitions. At age ten, she began studying with Professor Lin Yaoji at the Central Conservatory of Music in Beijing, and already was receiving media attention for the quality of her playing. After she performed at the 1999 Beijing Music Festival, violinist Isaac Stern invited her to play with him in the United States.

Yang debuted in Europe in 2001, performing with the Czech Broadcasting Symphony Orchestra in Prague. In 2003, she performed Prokofiev’s Concerto No. 2 in Munich with the Orchestra of the Bayerische Staatsoper, and followed this with recitals in Paris, Stockholm, Frankfurt and Vienna. Also in 2003, Yang was awarded a special two-year scholarship by the German Academic Exchange Service (DAAD) to study chamber music in Germany. Yang's North American debut was in the 2007-2008 season, when she performed at the Virginia Arts Festival with the Virginia Symphony. She also have her debut performance at Berlin Philharmonic Hall, that same year, which was broadcast live by Deutschland Radio. She gave recitals in Switzerland and France, and carried out an extensive tour of Germany with Klassische Philharmonie Bonn.

Yang recorded her first CD in 2000, at the age of 13, with a recording of Paganini's 24 Caprices, on the Hugo Classical label. In 2004, she began recording for Naxos, beginning a series of the complete works of Pablo de Sarasate, which will eventually cover 8 CDs. She has also recorded works by Piazzolla and Vivaldi.

Fredell Lack was an American violinist. Noted as a concert soloist, recording artist, chamber musician, and teacher, she was the C. W. Moores Distinguished Professor of Violin at the Moores School of Music at the University of Houston in Houston, Texas.

Madeleine Louise Mitchell MMus, ARCM, GRSM, FRSA is a British violinist who has performed as a soloist and chamber musician in over forty countries. She has a wide repertoire and is particularly known for commissioning and premiering new works and for promoting British music in concert and on disc. 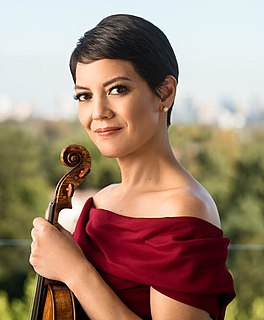 Anne Akiko Meyers is an American concert violinist. Meyers was the top-selling classical instrumentalist of 2014 on Billboard's traditional classical charts.

Frank Xin Huang is a Chinese-born American violinist and teacher. Since 2015 he has been the concertmaster of the New York Philharmonic. Previous to his position in New York, Huang was the first violinist of the Ying Quartet and a professor of violin and chamber music at the Eastman School of Music, then served as the concertmaster of the Houston Symphony from 2010 to 2015. He has won several international music competitions, most notably the 2003 Naumburg Competition. Huang has concertized widely as a soloist, and his debut recording on Naxos was critically acclaimed.

David Fung is a concert pianist.

Dylana Jenson is an American concert violinist and violin teacher. She lives in Grand Rapids, Michigan with her husband, conductor-cellist David Lockington, music director laureate of the Grand Rapids Symphony. They have four children. Jenson is the sister of Vicky Jenson, an animated film story board artist and director.

Yuja Wang is a Chinese classical pianist. She was born in Beijing, began studying piano there at age six, and went on to study at the Central Conservatory of Music in Beijing and the Curtis Institute of Music in Philadelphia. By the age of 21, she already was an internationally recognized concert pianist, giving recitals around the world. She has a recording contract with Deutsche Grammophon. Wang tours internationally and has received critical praise for her performances. Her style choices in performance have also attracted attention. Yuja Wang lives in New York City.

Jennifer Frautschi is an American classical violinist, currently Artist-in-Residence at Stony Brook University. She plays an Antonio Stradivarius violin known as the "ex-Cadiz," dated to 1722 which a private American foundation gave to her on loan.

Kinga Augustyn is a New York City-based virtuoso violinist. She has established an international career having performed as a soloist with numerous orchestras, recitalist, and recording artist.

Vera Tsu Weiling is a professional violinist and Professor and Master tutor of the Central Conservatory in Beijing and Shanghai Conservatory. She is featured in the Academy Award winning documentary From Mao to Mozart: Isaac Stern in China, directed by Murray Lerner. Tsu Weiling serves as co-chairman of the Shanghai Isaac Stern International Violin Competition and vice-president of the China Violin Society.

Tessa Lark is an American concert violinist from Kentucky.

Asuka Sezaki is a Japanese classical violinist who made an international career.