Tianwendian (Chinese : 天文点 ; pinyin :Tiānwén diǎn; lit. 'astronomical point') is the name of a border outpost and a military defence area of China in the northern Aksai Chin region under its administration (as part of Xinjiang). [3] [4] The region is roughly equivalent to Depsang Plains in Indian terminology,which is under Chinese control. The Tianwendian outpost is in the Chip Chap River valley close to China's Line of Actual Control with India.

Tianwendian is taken to mean "astronomical point",but the literal meaning would be "sky art point",with "sky art" being interpreted to mean astronomy. The name is said to have been used to describe a military defence area in northern Aksai Chin in the run-up to the 1962 Sino-Indian War. [3] [5] The region was also referred to as the "sky defence area" (Chinese :天防区; pinyin :Tiān fángqū). [5] The name is an obvious allusion to the high elevation of the area,reported as 6200 metres above sea level. [6] [5]

The region extends till the next defence area to the south,viz.,Heweitan ("river beach"). [7] The Depsang Bulge area has been referred to as the "South Tianwendian Valley", [8] its river Burtsa Nala as "Tiannan", [9] and its mountain pass to the Jeong Nala valley as the "Tianhexi Pass"—the "western pass between Tian(wendian) and He(weitan)". [10] In this respect,Tianwendian is the Chinese equivalent of India's "Depsang Plains". [8]

In the 1980s,a specific outpost named Tianwendian was established close to China's Line of Actual Control with India's Daulat Beg Oldi sector. [11] [12] Now it is more common to use the name to refer to the outpost than the defence area.

The newer Tianwendian post was established after the 1962 war. China said it was an astronomical observatory. A few years later India realised that it was an not an observatory but a military post. Over the years,China has continued to expand the post. [12]

The highest of the five Border Personnel Meeting points is located near Tianwendian. The Indian camp at Daulat Beg Oldi serves as the counter-party for this meeting point. [19] 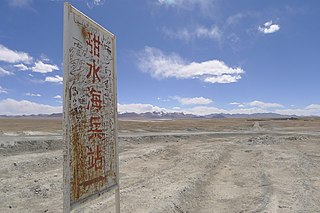 Aksai Chin is a region administered by China as part of Hotan County, Hotan Prefecture, Xinjiang and Rutog County, Ngari Prefecture, Tibet. It is claimed by India to be a part of its Leh District, Ladakh Union Territory. It is a part of the eastern portion of the Kashmir region and has been a subject of dispute between India and China since the late 1950s.

Daulat Beg Oldi is a traditional campsite and current military base located in the midst of the Karakoram Range in northern Ladakh, India. It is on the historic trade route between Ladakh and Central Asia, forming the last campsite before reaching the Karakoram Pass. It is said to be named after Sultan Said Khan, who died here on his return journey after an invasion of Ladakh and Kashmir. Chip Chap River, the main headwater of the Shyok River, flows just to the south. The Line of Actual Control with Chinese-controlled Aksai Chin is 5 miles to the east.

Demchok (Tibetan: བདེ་མཆོག, Wylie: bde mchog, THL: dem chok), is a village in the Zhaxigang Township, Ngari Prefecture in the Tibet region of China. India disputes the status and claims it as part of the Demchok sector that it regards as part of Ladakh. 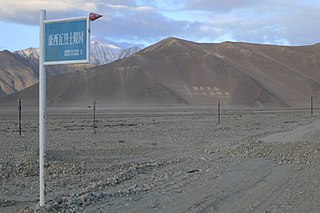 Kangxiwar is the location of a deserted town on the southwest side of the Kunlun Mountains. It is on the bank of the Karakash River in the western Xinjiang Uyghur Autonomous Region of the People's Republic of China. It is also the base of the route to Hotan from the Karakash valley via the Hindutash pass. According to Chinese sources, Kangxiwar means "place with mine" in Uyghur.

The Depsang Plains represent a high-altitude gravelly plain at the northwest portion of the disputed Aksai Chin region of Kashmir, divided into Indian and Chinese administered portions across a Line of Actual Control. India controls the western portion of the plains as part of Ladakh, whereas the eastern portion is controlled by China and claimed by India. The Line of Control with Pakistan-administered Gilgit-Baltistan is 80 kilometres (50 mi) west of the Depsang Plains with the Siachen Glacier in-between. Ladakh's traditional trade route to Central Asia passed through the Depsang Plains, with the Karakoram Pass lying directly to its north.

The Kongka Pass or Kongka La is a low mountain pass on the Line of Actual Control between India and China in eastern Ladakh. It lies on a spur of the Karakoram range that intrudes into the Chang Chenmo Valley adjacent to the disputed Aksai Chin region. China claimed the location as its border in a 1956 map, and attacked an Indian patrol party in 1959 killing ten policemen and apprehending ten others. Known as the Kongka Pass incident, the event was a milestone in the escalation of the border dispute between the two countries.

The 2013 Depsang standoff, also called 2013 Depsang incursion, or 2013 Daulat Beg Oldi incident, was an incursion and sit-in by a platoon-sized contingent of the Chinese PLA in the dry river bed of Raki Nala, in the Depsang Bulge area, 30 km south of Daulat Beg Oldi near the Line of Actual Control (LAC) in the disputed Aksai Chin region. Indian forces responded to the Chinese presence by quickly establishing their own encampment 300 metres (980 ft) away. Negotiations between China and India lasted nearly three weeks, during which the Chinese position was supplied by trucks and supported by helicopters. The dispute was resolved on 5 May, after which both sides withdrew. As part of the resolution, the Indian military agreed to dismantle some military structures 250 km away in the Chumar sector, which the Chinese perceived as threatening. The Chinese military in July 2014 acknowledged the incursion at the Depsang Valley in Ladakh region and said that such incidents occurred due to differing perceptions of the Line of Actual Control.

The Galwan River flows from the disputed Aksai Chin area administered by China to the Ladakh Union Territory of India. It originates near the caravan campsite Samzungling on the eastern side of the Karakoram range and flows west to join the Shyok River. The point of confluence is 102 km south of Daulat Beg Oldi. Shyok River itself is a tributary of the Indus River, making Galwan a part of the Indus River system.

Tianshuihai, alternately spelled Tien Shui Hai, is a salt water lake in the disputed Aksai Chin region administered by China as part of the Xinjiang Autonomous Region, which is also claimed by India. The lake's basin is a small plain, formerly known as the Thaldat basin or Mapothang. The lake drains the Thaldat stream that flows from the southwest. It is located east of the Lokzhung Range and northwest of the Aksai Chin Lake. 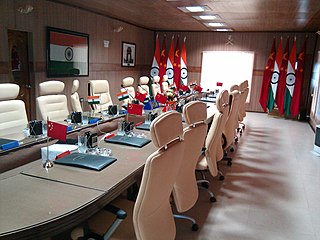 Border Personnel Meeting points are locations along the disputed Sino-Indian territories on Line of Actual Control (LAC) where the armies of both countries hold ceremonial and practical meetings to resolve border issues and improve relations. While border meetings have been held since the 1990s, the first formal Border Personnel Meeting point was established in 2013. There are five meeting points: two in the Indian Union Territory of Ladakh or India's Western (Northern) sector corresponding to China's Southern Xinjiang Military District of the Western Theater Command, one in Sikkim, and two in Arunachal Pradesh in India's Central and Eastern sectors corresponding to China's Tibet Military District.

The Darbuk–Shyok–DBO Road, also called the Sub-Sector North Road, is a strategic all-weather road in eastern Ladakh in India, close to the Line of Actual Control with China. It connects Ladakh's capital city Leh, via the villages of Darbuk and Shyok at southern Shyok River Valley, with the Daulat Beg Oldi (DBO) post near the northern border. The 220-km long section between Shyok and DBO was constructed between 2000 and 2019 by India's Border Roads Organisation (BRO). The DS-DBO Road has reduced the travel time between Leh to DBO from 2 days to 6 hours.

Chakgang, or Jaggang (Tibetan: ལྕགས་སྒང, Wylie: lcags sgang; Chinese: 甲岗; pinyin: Jiǎ gǎng, often transliterated Jiagang), is a village in the Rutog County, Ngari Prefecture in the Tibet region of China. It is on a wide plain at a major junction in the Maga Zangbo valley where several tributary streams join the river. It is traditionally known for its barley cultivation. The area was used as a base for Chinese military operations in the Demchok sector in the 1962 Sino-Indian War.

The Depsang Bulge or Burtsa Bulge is a 900 square kilometre area of mountain terrain in the disputed Aksai Chin region, which was conceded to India by China in 1960 but remains under Chinese occupation since the 1962 Sino-Indian War. The area is immediately to the south of Depsang Plains and encloses the basin of the Burtsa Nala, a stream originating in the Aksai Chin region and flowing west to merge with the Depsang Nala near the village of Burtsa in Ladakh, eventually draining into the Shyok River. The area is perceived to be of strategic importance to both the countries, sandwiched by strategic roads linking border outposts. Since 2013, China has made attempts to push the Line of Actual Control further west into the Indian territory, threatening India's strategic road.

The Jeong Nala, also called Jiwan Nala and Nacho Chu, and called Xidagou by China, is a tributary of the Shyok River that flows from the disputed Aksai Chin region administered by China to Ladakh in India. It originates at the eastern edge of the Karakoram Range and flows west. It merges with the Murgo Nala coming from the north just before joining the Shyok River near Sultan Chushku.

Shenxianwan is the location of a battalion military post of China to the north of the Karakoram Pass. It is in the valley of the Wahab Jilga river, a tributary of the Yarkand River, along the traditional Central Asian caravan route.