Tianxin may refer to:

Tianxin is a small town of Longchuan County, Heyuan City, Guangdong Province, China. It is located in east-central part of Longchuan County, upstream of the Han River, with Xingning Town and Huilong Town to its east, Shikeng Town and Tiechang Town to its south, and Chiguang Town to its north. Tianxin was set up as a district in November 1983, and a town in 1990 to now. It has higher topography in the northeast and lower in the southwest, with a chain of undulating hills.

Shifeng District is one of four urban districts of Zhuzhou City, Hunan province, China. It is named after the Shifeng Park, which lies on the south of the district and the northern bank of the Xiang River.

Tianxin District is one of six urban districts of Changsha, the capital of Hunan province, China. the district is bordered by Yuetang District of Xiangtan to the south, Yuhua District to the east, Furong and Kaifu districts to the north, Yuelu District across the Xiang river to the west. Located in the southern central Changsha, Tianxin covers 141.05 km2 (54.46 sq mi) with population of 604,600. The district has 14 subdistricts under its jurisdiction, the government seat is at Qingyuan Subdistrict.

Zhuzhou, formerly Jianning, is a prefecture-level city of Hunan Province, China, straddling the Xiang River southeast of the provincial capital, Changsha, and bordering Jiangxi province to the east. It is part of the "Changzhutan Golden Triangle". The city has jurisdiction over 5 counties and four districts, and covers an area of 11,420 km2 (4,410 sq mi). 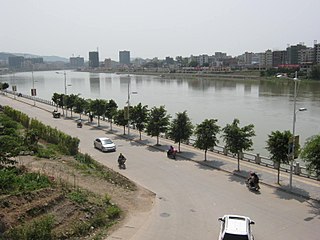 Longchuan County is a county of northeastern Guangdong province, China, bordering Jiangxi to the north and on the upper reaches of the Dong and Han Rivers. It is under the administration of Heyuan City, and in 2004 had a population of 870,000 living in an area of 3,089 km2 (1,193 sq mi). Bordering county-level divisions are Xingning and Wuhua County to the east, Heping County and Dongyuan County to the south and west, and in Jiangxi, Dingnan County and Xunwu County to the north.

Kaifu District is one of six urban districts of Changsha, the capital of Hunan province, China. The district is bordered by Furong and Tianxin Districts to the south, Changsha County to the east and northeast, Wangcheng District to the north, Yuelu and Wangcheng Districts across the Xiang river to the west. Located in the central Changsha, Kaifu covers 188.73 km2 (72.87 sq mi) with population of 595,000, registered population of 452,168. The district has 16 subdistricts under its jurisdiction, the government seat is at Furongbeilu subdistrict.

Yuhua District is one of six urban districts of Changsha, Hunan province, China. the district is bordered by Yuetang District of Xiangtan to the south, Changsha County to the east, Furong District to the north, Tianxin District to the west. Located in the southern central Changsha, Yuhua covers 304.9 km2 (117.7 sq mi) with population of 764,700. The district has 12 subdistricts and 1 town under its jurisdiction, the government seat is at Guitang subdistrict.

Lukou District, formerly Zhuzhou County, is a district of the city of Zhuzhou, Hunan Province, China. Located on the south central Hunan along the Xiang River, the district is bordered to the north by Liuyang City, Lusong and Tianyuan Districts, to the west by Xiangtan County, to the southwest by Hengdong County, to the southeast by You County, to the east by Liling City. Lukou covers 1,053.62 km2 (406.80 sq mi), as of 2015, it had a registered population of 348,800 and resident a population of 292,400. The district has 8 towns under its jurisdiction, the seat is at Lukou Town (渌口镇).

Lusong District is one of four urban districts of Zhuzhou City, Hunan province, China. The district was formed on May 31, 1997, it is named after its seat located near the place of Lusong Road.

Xintian may refer to the following places in China:

Changsha–Zhuzhou–Xiangtan intercity rail, is a high-speed regional railway in Hunan, China. It connects the provincial capital Changsha with Zhuzhou and Xiangtan. The line was opened to traffic on December 26, 2016. A northwestern extension to Changsha west railway station opened on December 26, 2017. The maximum operating speed is expected to be up to 200 km/h, travelling time between the three cities will be shortened to less than 30 minutes. The line uses China Railways CRH6F regional rail trains.

The Mi River is one of three largest tributaries of the Xiang River and a right-bank tributary in the middle reaches of the Xiang in Hunan, China. The river rises in Tianxin Village of Xiacun Township, Yanling County. Its main stream runs generally southeast to northwest through Yanling, Chaling, You and Hengdong counties, and it joins the Xiang in Xintang Town of Hengdong. The Mi River has a length of 296 kilometres (184 mi); its drainage basin covers an area of 10,305 square kilometres (3,979 sq mi).

Ningjiaping is a town of You County, in the east of Hunan province, China. Merging Pingyangmiao and Hunan'ao townships, the town was created on November 26, 2015. It has 20 villages and a community under its jurisdiction with an area of 201.2 km2 (77.7 sq mi), as of 2015 end, it has a population of 48,200, its administrative centre is Ningjiaping Community (宁家坪社区).

Longchuan is a town of Zhuzhou County, Hunan, China. Amalgamating the former Wangshiwan and Tangshi two townships, the town was established on November 26, 2015. It has an area of 160.85 km2 (62.10 sq mi), as of 2015 end, its population is 56,800. The town is divided into 25 villages and a community, its administrative centre is Huashi Village (花石村).