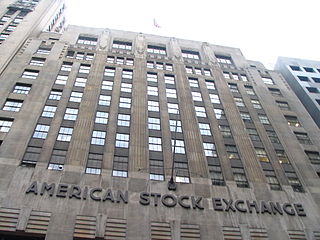 NYSE American, formerly known as the American Stock Exchange (AMEX), and more recently as NYSE MKT, is an American stock exchange situated in New York City, New York. AMEX was previously a mutual organization, owned by its members. Until 1953, it was known as the New York Curb Exchange.

A biopharmaceutical, also known as a biologic(al) medical product, or biologic, is any pharmaceutical drug product manufactured in, extracted from, or semisynthesized from biological sources. Different from totally synthesized pharmaceuticals, they include vaccines, blood, blood components, allergenics, somatic cells, gene therapies, tissues, recombinant therapeutic protein, and living cells used in cell therapy. Biologics can be composed of sugars, proteins, or nucleic acids or complex combinations of these substances, or may be living cells or tissues. They are isolated from living sources—human, animal, plant, fungal, or microbial. 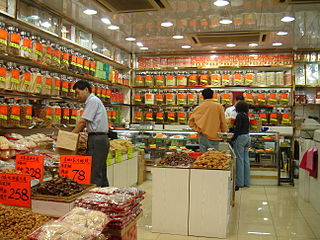 Traditional Chinese medicine (TCM) is a style of traditional medicine based on more than 2,500 years of Chinese medical practice that includes various forms of herbal medicine, acupuncture, massage, exercise (qigong), and dietary therapy, but recently also influenced by modern Western medicine. TCM is widely used in Greater China where it has a long history, and recently it has begun "gaining global recognition". One of the basic tenets of TCM is that "the body's vital energy circulates through channels, called meridians, that have branches connected to bodily organs and functions." Concepts of the body and of disease used in TCM reflect its ancient origins and its emphasis on dynamic processes over material structure, similar to European humoral theory.

In 2010, there were 56 Chinese medicines and pharmaceuticals produced by the company approved by the State Food and Drug Administration (SFDA), 23 of which are listed in the National Medical Reimbursement List (NMRL) and seven are listed in the Essential Drug List (EDL) of China. Nearly half of the medicines are prescription medicines.

Currently there are 17 products pending SFDA approval and engages in cooperation with many academic institutions in China, such as China Pharmaceutical University, Sichuan University, and Shaanxi University of Chinese Medicines. [3] Sept. 2013Tianyin Pharmaceutical received the Official Certificate of GMP (Guidelines in English: http://eng.sfda.gov.cn/WS03/CL0768/65113.html) for both of its pre-extraction plant and formulation facilities by the China Food and Drug Administration (CFDA) officials. [4] July. 2013, the company’s product Gingko Mihuan Oral Liquid (GMOL) was awarded Provincial Essential Drug List (PEDL) status at Guangdong Province. Before that, the company has included in the list in four provinces, namely Henan Province, Shandong Province, Sichuan Province and the City of Chongqing. [5]

China Pharmaceutical University (CPU) is a university in Nanjing, China that specializes in the pharmaceutical sciences. It is one of the “Project 211” key universities and universities selected for the "985 Innovative Platforms for Key Disciplines Project" affiliated with the Chinese Ministry of Education, which has granted it Double First Class status in certain disciplines.

Good manufacturing practices (GMP) are the practices required in order to conform to the guidelines recommended by agencies that control the authorization and licensing of the manufacture and sale of food and beverages, cosmetics, pharmaceutical products, dietary supplements, and medical devices. These guidelines provide minimum requirements that a manufacturer must meet to assure that their products are consistently high in quality, from batch to batch, for their intended use. The rules that govern each industry may differ significantly; however, the main purpose of GMP is always to prevent harm from occurring to the end user. Additional tenets include ensuring the end product is free from contamination, that it is consistent in its manufacture, that its manufacture has been well documented, that personnel are well trained, and the product has been checked for quality more than just at the end phase. GMP is typically ensured through the effective use of a quality management system (QMS). 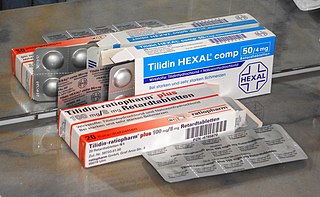 A medication is a drug used to diagnose, cure, treat, or prevent disease. Drug therapy (pharmacotherapy) is an important part of the medical field and relies on the science of pharmacology for continual advancement and on pharmacy for appropriate management.

Title 21 is the portion of the Code of Federal Regulations that governs food and drugs within the United States for the Food and Drug Administration (FDA), the Drug Enforcement Administration (DEA), and the Office of National Drug Control Policy (ONDCP).

Pharmaceutical compounding is the creation of a particular pharmaceutical product to fit the unique need of a patient. To do this, compounding pharmacists combine or process appropriate ingredients using various tools. This may be done for medically necessary reasons, such as to change the form of the medication from a solid pill to a liquid, to avoid a non-essential ingredient that the patient is allergic to, or to obtain the exact dose(s) needed or deemed best of particular active pharmaceutical ingredient(s). It may also be done for more optional reasons, such as adding flavors to a medication or otherwise altering taste or texture. Compounding is most routine in the case of intravenous/parenteral medication, typically by hospital pharmacists, but is also offered by privately owned compounding pharmacies and certain retail pharmacies for various forms of medication. Whether routine or rare, intravenous or oral, etc., when a given drug product is made or modified to have characteristics that are specifically prescribed for an individual patient, it is known as "traditional" compounding.

The pharmaceutical industry in Bangladesh is one of the most developed technology sectors within Bangladesh. Manufacturers produce insulin, hormones, and cancer drugs. This sector provides 97% of the total medicinal requirement of the local market. The industry also exports medicines to global markets, including Europe. Pharmaceutical companies are expanding their business with the aim to expand the export market.

Chinese patent medicine are herbal medicines in Traditional Chinese medicine, modernized into a ready-to-use form such as tablets, oral solutions or dry suspensions, as opposed to herbs that require cooking.

Yunnan Baiyao is a well-known proprietary traditional Chinese medicine marketed and used as a hemostatic with use in both human and veterinary alternative medicine. There are multiple routes of drug administration. Administration of Yunnan Baiyao has been shown to "significantly reduced perioperative bleeding as well as bleeding in various ulcerative–hemorrhagic conditions". There is limited evidence regarding its effectiveness in preventing or treating hemorrhagic and pathological conditions in both humans and animals via oral administration. Yunnan Baiyao is sold in powder, tincture, plaster, paste, aerosol, or tablet form. The medicine, developed by Qu Huangzhang in 1902, is designated as one of two Class-1 protected traditional Chinese medicines which gives it 20 years of trade protection in China. In China, its reputation is said to be equal to that of penicillin in the U.S. It is founded and manufactured by a state-owned enterprise, Yunnan Baiyao Group in Yunnan, China.

In 2007 a series of product recalls and import bans were imposed by the product safety institutions of the United States, Canada, the European Union, Australia and New Zealand against products manufactured in and exported from the mainland of the People's Republic of China (PRC) because of numerous alleged consumer safety issues.

Unaffordable medications are a hole in the Chinese safety net. This forces workers to save as much as possible in order to weather family medical emergencies, which acts to depress domestic consumption, leaving no alternative to the traditional unsustainable export and investment driven economic model.

In March 2008, major recalls of heparin, a substance widely used as an injectable anticoagulant, were announced by the U.S. Food and Drug Administration (FDA) due to contamination of the raw heparin stock imported from China.

Simcere Pharmaceutical Group or Simcere Pharmaceutical is a manufacturer and supplier of branded generic pharmaceuticals in the Chinese market. Its focus is to introduce generic and pharmaceutical products for the treatment of diseases with high incidence and/or mortality rate. The Company has introduced a generic anti-stroke medication under the brand name, Bicun, and an anti-cancer medication under the brand name, Endu. Its products include antibiotics, anti-stroke medications, anti-inflammatory drugs, anti-cancer medications and other medicines. In addition, it has obtained approvals from the China State Food and Drug Administration (SFDA) to manufacture and sell over 210 other products.

Camurus AB (publ) is a Swedish research-based pharmaceutical and biotechnology company specialising in the commercialization of medicines for treating serious and chronic diseases. Established in 1991 and based in the southern university city of Lund, in the Medicon Valley region, the company is listed on Nasdaq Stockholm, Mid Cap.

General Pharmaceuticals Limited is a pharmaceutical company based in Dhaka, Bangladesh since 1987.

Ipca Laboratories is an international pharmaceutical company based in Mumbai, India. It produces Theo bromine, Acetylthiophene, and P-Bromo Toluene as Active Pharmaceutical Ingredients (APIs). Ipca sells these APIs and their intermediates world over. It produces more than 150 formulations that include oral liquids, tablets, dry powders, and capsules. The various kinds of drug intermediates that the company manufactures include Theo bromine, Acetylthiophene, and P- Bromo Toluene and promotes over 36 countries of Asia, Africa, CIS, and South America, including Cambodia, Kazakhstan, Kenya, Mauritius, Myanmar, Nigeria, Oman, Russia, Sri Lanka, Sudan, Tanzania, Ukraine, Vietnam and Yemen. The main activities of company are to produce and market pharmaceuticals and drugs. The various products of the company include formulations, drug intermediates, and active pharmaceutical ingredients (API).

Wang Aiping is a Chinese pharmacologist and toxicologist. For over 20 years, Wang has been researcher in drug and toxicity testing and has experience in new drug development. Since 2001, he has been Director of Drug Safety Evaluation and Research at the Academy of Medical Sciences, Peking Union Medical College and was also made General Manager of Technological development at Peking Union Medical College's Jianhao Pharmaceutical Technology Development Co., Ltd.

Norbrook is a United Kingdom-based pharmaceutical company. It was founded in 1969 by Lord Ballyedmond as Norbrook Laboratories Ltd in Northern Ireland. In 1970, Norbrook began manufacturing of veterinary pharmaceuticals. In 2011 the Norbrook Group was listed by the Belfast Telegraph in its Top 100 Companies list as being in position 28.

Torque pharmaceutical is an Indian pharmaceutical company with production units at Issapur, Derabassi in Punjab and at Jharmajri, Baddi in Himachal Pradesh. It manufactures medicines for prevention and treatment of various health related problems. The product range comprises antibiotics, nutritional supplements and cough syrup to antipyretics and anti-inflammatory products.

Drug distribution is the process by means of which people get access to medication.