It was revealed that the remains in the Tianyuan Cave has ancestral relation "to many present-day Asians and Native Americans". [3] [4] [5] [6] [7]

Kennewick Man is the name generally given to the skeletal remains of a prehistoric Paleoamerican man found on a bank of the Columbia River in Kennewick, Washington, United States, on July 28, 1996. It is one of the most complete ancient skeletons ever found. Radiocarbon tests on bone have shown it to date from 8.9k to 9k calibrated years before present, but it was not until 2013 that Ancient DNA analysis techniques had improved enough to shed light on the remains. In June 2015, it was announced that Kennewick Man had most genetic similarity among living peoples to Native Americans, including those in the Columbia River region where the skeleton was found.

Paleogenetics is the study of the past through the examination of preserved genetic material from the remains of ancient organisms. Emile Zuckerkandl and the physical chemist Linus Carl Pauling introduced the term "paleogenetics" in 1963, in reference to the examination of possible applications in the reconstruction of past polypeptide sequences. The first sequence of an ancient DNA, isolated from a museum specimen of the extinct quagga, was published in 1984 by a team led by Allan Wilson.

Peștera cu Oase is a system of 12 karstic galleries and chambers located near the city Anina, in the Caraș-Severin county, southwestern Romania, where some of the oldest European early modern human (EEMH) remains, between 37,000 and 42,000 years old, have been found.

Tianyuan man are the remains of one of the earliest modern humans to inhabit East Asia. In 2007, researchers found 34 bone fragments belonging to a single individual at the Tianyuan Cave near Beijing, China. Radiocarbon dating shows the bones to be between 42,000 and 39,000 years old, which may be slightly younger than the only other finds of bones of a similar age at the Niah Caves in Sarawak on Borneo. 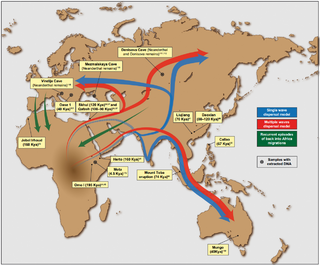 Early human migrations are the earliest migrations and expansions of archaic and modern humans across continents and are believed to have begun approximately 2 million years ago with the out of Africa migration of Homo erectus. This initial migration was followed by other archaic humans including H. heidelbergensis, which lived around 500,000 years ago and was the likely ancestor of both Denisovans and Neanderthals. Early hominids were said to have "crossed land bridges that were eventually covered in water". 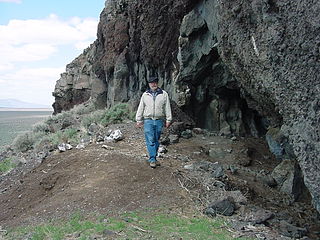 The Paisley Caves complex is a system of four caves in an arid, desolate region of south-central Oregon, United States north of the present-day city of Paisley, Oregon. The caves are located in the Summer Lake basin at 4,520 feet (1,380 m) elevation and face to the west in a ridge of Miocene and Pliocene era basalts mixed with soft volcanic tuffs and breccias, from which the caves were carved by Pleistocene-era waves from Summer Lake. One of the caves may contain archaeological evidence of the oldest definitively-dated human presence in North America. The site was first studied by Luther Cressman in the 1930s.

Tianyuan may refer to:

The genetic history of Indigenous peoples of the Americas is divided into two sharply distinct episodes: the initial peopling of the Americas during about 20,000 to 14,000 years ago, and European contact, after about 500 years ago. The former is the determinant factor for the number of genetic lineages, zygosity mutations and founding haplotypes present in today's Indigenous Amerindian populations. 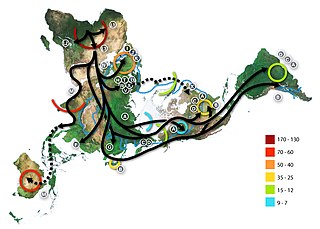 In paleoanthropology, the recent African origin of modern humans, also called the "Out of Africa" theory (OOA), recent single-origin hypothesis (RSOH), replacement hypothesis, or recent African origin model (RAO), is the dominant model of the geographic origin and early migration of anatomically modern humans. It follows the Early expansions of hominins out of Africa, accomplished by Homo erectus and then Homo neanderthalensis. 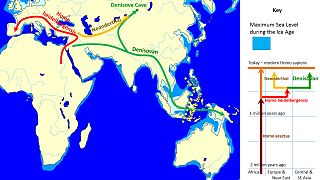 The Denisovans or Denisova hominins(di-NEE-sə-və) are an extinct species or subspecies of archaic humans in the genus Homo. Pending its taxonomic status, it currently carries temporary species or subspecies names Homo denisova, Homo altaiensis, Homo sapiens denisova, or Homo sp. Altai. In 2010, scientists announced the discovery of an undated finger bone fragment of a juvenile female found in the Denisova Cave in the Altai Mountains in Siberia, a cave that has also been inhabited by Neanderthals and modern humans. The mitochondrial DNA (mtDNA) of the finger bone showed it to be genetically distinct from Neanderthals and modern humans. The nuclear genome from this specimen suggested that Denisovans shared a common origin with Neanderthals, that they ranged from Siberia to Southeast Asia, and that they lived among and interbred with the ancestors of some modern humans, with about three to five percent of the DNA of Melanesians and Aboriginal Australians and around six percent in Papuans deriving from Denisovans. Several additional specimens from the Denisova Cave were subsequently discovered and characterized, as was a single specimen from the Baishiya Karst Cave on the Tibetan Plateau in China.

There is evidence for interbreeding between archaic and modern humans during the Middle Paleolithic and early Upper Paleolithic. The interbreeding happened in several independent events that included Neanderthals and Denisovans, as well as several unidentified hominins.

On Your Knees Cave (49-PET-408) is an archaeological site located in southeastern Alaska. Human remains were found at the site in 1996 that dated between 9,730 ±60 and 9,880±50 radiocarbon YBP or a calendrical date of 10,300 YBP. In addition to human skeletal remains, stone tools and animal bones were discovered. DNA analyses performed on the human skeletal remains document the presence of mitochondrial haplogroup D which occurs widely in the Americas. Isotopic analysis indicated that the individual had a primarily marine based diet.

The Red Deer Cave people were the most recent known prehistoric archaic human population. Fossils dated to the Bølling-Allerød warming, between about 14,500 to c. 11,500 years ago, were found in Red Deer Cave (Maludong) and Longlin Cave in Southwest China.

Anzick-1 is the name given to the remains of Paleo-Indian male infant found in south central Montana, U.S. in 1968 that date to 12,707–12,556 years BP. The child was found with more than 115 tools made of stone and antlers and dusted with red ocher, suggesting an honorary burial. Anzick-1 is the only human who has been discovered from the Clovis Complex, and is the first ancient Native American genome to be fully sequenced.

Fuyan Cave is a complex of limestone caves in Tangbei village, Lefutang town, Daoxian, Hunan province, south central China famous for the discovery of the oldest evidence for unambiguously fully modern humans outside Africa. 47 human teeth, dating to between 80,000 and 120,000 years ago, were discovered at Fuyan Cave. The teeth are also unusual for showing signs of cavities, a feature typically not found in teeth older than 50,000 years.

The Upward Sun River site, or Xaasaa Na’, is a Late Pleistocene archaeological site associated with the Paleo-Arctic Tradition, located in the Tanana River Valley, Alaska. Dated to around 11,500 BP, Upward Sun River is the site of the oldest human remains discovered on the American side of Beringia. The site was first discovered in 2006.

Baishiya Karst Cave is a Tibetan Buddhist sanctuary and a high-altitude paleoanthropological site located on the northeastern edge of the Tibetan Plateau in Xiahe County, Gansu, China. This karst cave is the site of the discovery of the earliest hominin fossil found on the Tibetan Plateau, the Xiahe mandible. The mandible, by way of palaeoproteomic analysis, is the first confirmed discovery of a Denisovan fossil outside of Denisova Cave. This fossil discovery shows that archaic hominins were present in a high-altitude, low-oxygen environment by around 160,000 years ago.