Tianzhen railway station is a station on the Beijing–Baotou railway and the Datong–Zhangjiakou high-speed railway in Tianzhen County, Datong, Shanxi. 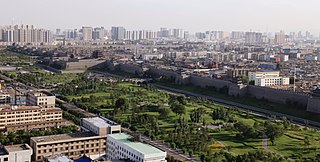 Datong is a prefecture-level city in northern Shanxi Province in the People's Republic of China. It is located in the Datong Basin at an elevation of 1,040 metres (3,410 ft) and borders Inner Mongolia to the north and west and Hebei to the east. It had a population of 3,318,057 during the 2010 census, of whom 1,629,035 lived in the built-up area made of the three urban districts of Chengqu, Kuangqu and Nanjiao. 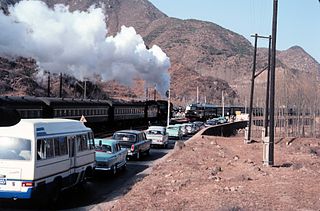 The Beijing–Baotou railway or Jingbao railway is an 833 km (518 mi) railway from Beijing to Baotou, Inner Mongolia, functioning as an important route in North China. It was the first railway in China designed and built by Chinese. It passes through a famous section of the Great Wall at Badaling. It is now largely paralleled by Beijing–Zhangjiakou intercity railway and Zhangjiakou–Hohhot high-speed railway.

The Shaoshan 7 is a type of electric locomotive used on the People's Republic of China's national railway system. They are widely used on electrified lines in the southwest part of China.

Datong Hui and Tu Autonomous County is an autonomous county of Hui and Tu peoples in Qinghai Province, China, it is under the administration of the prefecture-level city of Xining, the capital of Qinghai.

Tianzhen County is a county of Shanxi province, China, bordering Hebei province to the northeast, east and south and Inner Mongolia to the northwest. It is under the administration of Datong City and is the northernmost county-level division of the province.

Xiaxiaobao railway station is a station of Jingbao Railway in Datong City, Shanxi.

Luowenzao railway station is a station of Jingbao Railway in Datong City, Shanxi.

Wangguanrentun railway station is a station of Jingbao Railway in Datong City, Shanxi.

Julebao railway station is a station of Jingbao Railway in Datong City, Shanxi.

Gudian railway station is a station of Jingbao Railway in Datong City, Shanxi.

Feng Lixiang is a Chinese politician from Shanxi who served as the Communist Party Secretary of Datong from 2008 to 2014. In 2014, he was investigated for corruption, expelled from the Communist Party, and indicted on bribery charges. 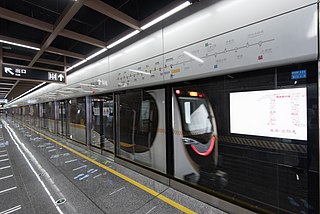 Taiyuannan (South) railway station (Chinese: 太原南站 is a railway station in Xiaodian District, Taiyuan, Shanxi, China. It opened on July 1, 2014, together with the Datong–Xi'an Passenger Railway.

Datonglong tianzhenensis is an herbivorous ornithischian dinosaur belonging to the Hadrosauroidea, which lived in the Late Cretaceous period in present-day China. It is the type species of the genus Datonglong.

The Datong–Zhangjiakou high-speed railway, also known as the Dazhang passenger dedicated line is a high-speed railway between Zhangjiakou in Hebei province in the east and Datong in Shanxi province in the west. The total length of the main line is about 141.524 kilometres. There are five stations on the whole line. It is connected to the Beijing–Zhangjiakou intercity railway at Zhangjiakou station, and shares the tracks of the Huzhang Passenger Dedicated Line between Zhangjiakou station and Huai'an station. The Da Zhang Passenger Dedicated Line forks out at Huai'an Station and is connected to the Datong–Xi'an passenger railway at Datong South. It forms part of the Beijing–Zhangjiakou–Datong–Taiyuan branch of the Beijing–Kunming corridor.