Tianzhenosaurus (Tianzhen + Greek sauros="lizard") is a genus of ankylosaurid dinosaurs discovered in Tianzhen County, at Kangdailiang near Zhaojiagou Village, in Shanxi Province, China, in the Late Cretaceous Huiquanpu Formation. Thus far, a virtually complete skull and postcranial skeleton have been assigned to the genus, which is monotypic (T. youngi Pang & Cheng, 1998).

This was a medium-sized ankylosaurian, the skull measuring 28 cm (11 in) in length, with a total body length around 4 m (13 ft).

Animantarx is a genus of nodosaurid ankylosaurian dinosaur from the Upper Cretaceous of western North America. Like other nodosaurs, it would have been a slow-moving quadrupedal herbivore covered in heavy armor scutes, but without a tail club. The skull measures approximately 25 cm in length, suggesting the animal as a whole was no more than 3 meters long.

Gargoyleosaurus is one of the earliest ankylosaurs known from reasonably complete fossil remains. Its skull measures 29 centimetres (11 in) in length, and its total body length is an estimated 3 to 4 metres. It may have weighed as much as 1 tonne (2,200 lb). The holotype was discovered at the Bone Cabin Quarry West locality, in Albany County, Wyoming in exposures of the Upper Jurassic Morrison Formation. 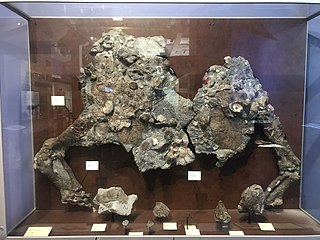 Aletopelta coombsi is an herbivorous ankylosaurian ornithischian dinosaur that during the Late Cretaceous lived in the area of what is now Southern California.

Nodosauridae is a family of ankylosaurian dinosaurs, from the Late Jurassic to the Late Cretaceous period of what are now North America, Europe, Asia, Africa, and Antarctica.

Stegopelta is a genus of armored dinosaur. It is based on a partial skeleton from the latest Albian-earliest Cenomanian-age Lower and Upper Cretaceous Belle Fourche Member of the Frontier Formation of Fremont County, Wyoming, USA.

Texasetes is a genus of ankylosaurian dinosaurs from the late Lower Cretaceous of North America. This poorly known genus has been recovered from the Paw Paw Formation near Haslet, Tarrant County, Texas, which has also produced the nodosaurid ankylosaur Pawpawsaurus. Texasetes is estimated to have been 2.5–3 m (8–10 ft) in length. It was named by Coombs in 1995.

Cedarpelta is an extinct genus of herbivorous basal ankylosaurid ankylosaur, based on material recovered from the Lower Cretaceous of North America. The skull lacks extensive cranial ornamentation, a trait which has been interpreted as plesiomorphic for ankylosaurs.

Hierosaurus is an extinct genus of nodosaurid ankylosaur which lived during the Cretaceous 87 to 82 million years ago. Its fossils were found in the Smoky Hill Chalk Member of the Niobrara Formation, in western Kansas, which would have been near the middle of Western Interior Sea during the Late Cretaceous. It was a nodosaurid, an ankylosaur without a clubbed tail.

Huabeisaurus was a genus of dinosaur from the Late Cretaceous. It was a sauropod which lived in what is present-day northern China. The type species, Huabeisaurus allocotus, was first described by Pang Qiqing and Cheng Zhengwu in 2000. Huabeisaurus is known from numerous remains found in the 1990s, which include teeth, partial limbs and vertebrae. Due to its relative completeness, Huabeisaurus represents a significant taxon for understanding sauropod evolution in Asia. Huabeisaurus comes from Kangdailiang and Houyu, Zhaojiagou Town, Tianzhen County, Shanxi province, China. The holotype was found in the unnamed upper member of the Huiquanpu Formation, which is Late Cretaceous (?Cenomanian–?Campanian) in age based on ostracods, charophytes, and fission-track dating.

Mymoorapelta is an ankylosaur from the Late Jurassic (Kimmeridgian-Tithonian) Morrison Formation of western Colorado, USA. The taxon is known from portions of a disarticulated skull, parts of three different skeletons and other postcranial remains. It is present in stratigraphic zones 4 and 5 of the Morrison Formation.

Gobisaurus is an extinct genus of herbivorous basal ankylosaurid ankylosaur from the Upper Cretaceous of China. The genus is monotypic, containing only the species Gobisaurus domoculus.

Pawpawsaurus, meaning "Pawpaw Lizard", is a nodosaurid ankylosaur from the Cretaceous of Tarrant County, Texas, discovered in May 1992. The only species yet assigned to this taxon, Pawpawsaurus campbelli, is based on a complete skull from the marine Paw Paw Formation.

Silvisaurus, from the Latin silva "woodland" and Greek sauros "lizard", is a nodosaurid ankylosaur from the middle Cretaceous period.

Tarchia is a genus of herbivorous ankylosaurid dinosaur from the late Cretaceous of Mongolia.

Liaoningosaurus is an unusual genus of ankylosaurian dinosaurs from the Early Cretaceous period of China. It contains a single species, Liaoningosaurus paradoxus, and is represented by two fossil specimens collected from the Yixian Formation of Liaoning Province. L. paradoxus was unusual among advanced ornithischian dinosaurs in that it is speculated to have hunted or scavenged, with preserved gut contents showing that it may have eaten fish. Additionally, some features of its skeleton may suggest that it was partially aquatic.

Antarctopelta was a genus of ankylosaurian dinosaur with one known species, A. oliveroi, which lived in Antarctica during the Late Cretaceous Period. It was a medium-sized ankylosaur, reaching no more than 4 meters (13 ft) in length, and showed characteristics of two different families, making more precise classification difficult. The single known fossil specimen was discovered on James Ross Island in 1986, constituting the first dinosaur remains ever discovered on Antarctica, although it is the second dinosaur from the continent to be formally named.

Priconodon is an extinct genus of dinosaur, known from its large teeth. Its remains have been found in the Aptian-Albian age Lower Cretaceous Arundel Formation of Muirkirk, Prince George's County, Maryland, USA.

This timeline of ankylosaur research is a chronological listing of events in the history of paleontology focused on the ankylosaurs, quadrupedal herbivorous dinosaurs who were protected by a covering bony plates and spikes and sometimes by a clubbed tail. Although formally trained scientists did not begin documenting ankylosaur fossils until the early 19th century, Native Americans had a long history of contact with these remains, which were generally interpreted through a mythological lens. The Delaware people have stories about smoking the bones of ancient monsters in a magic ritual to have wishes granted and ankylosaur fossils are among the local fossils that may have been used like this. The Native Americans of the modern southwestern United States tell stories about an armored monster named Yeitso that may have been influenced by local ankylosaur fossils. Likewise, ankylosaur remains are among the dinosaur bones found along the Red Deer River of Alberta, Canada where the Piegan people believe that the Grandfather of the Buffalo once lived.