Tianzhu County (Chinese :天柱县; pinyin :Tiānzhù Xiàn) is a county in the east of Guizhou province, China, bordering Hunan province to the north, east, and southeast. It is under the administration of the Qiandongnan Miao and Dong Autonomous Prefecture. 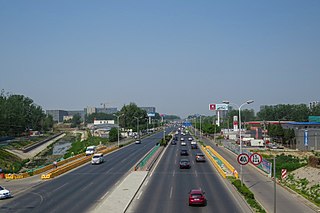 The Kam language, also known as Gam, or in Chinese, Dong or Tung-Chia, is a Kam–Sui language spoken by the Dong people. Ethnologue distinguishes three Kam varieties as separate but closely related languages. 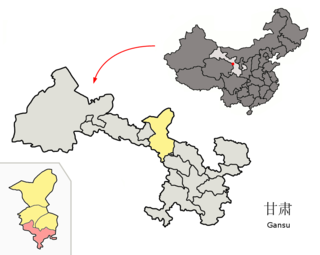 This is a list of the extreme points on land of Estonia: the points that are farther north, south, east or west than any other location.

Tianzhu Mountain or Mount Tianzhu is a mountain in Anhui, China. Tianzhu Mountain is also called Mount Wan, from which the provincial abbreviation for Anhui ("Wan") derives. Ancient names of the mountain include Mount Huo 霍山, Mount Heng 衡山, and Taiyue 太岳.

Ahnidzor, is a village in the Lori Province of Armenia. It belongs to the municipality of Tumanyan.

Sarahart is a town in the Lori Province of Armenia. 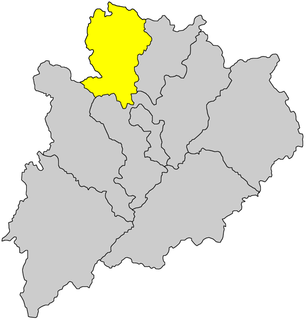 Pingyuan County is a county in the northeast of Guangdong Province, People's Republic of China. It is under the administration of Meizhou City.

Gadomiec-Chrzczany is a village in the administrative district of Gmina Chorzele, within Przasnysz County, Masovian Voivodeship, in east-central Poland.

Dali County is a county under the administration of the prefecture-level city of Weinan, in the east-central part of Shaanxi province, China, bordering Shanxi province to the east. It covers 1,766 km2 (682 sq mi). The population in 2002 was 690 thousand. Its economy focuses on agriculture, mainly yielding cotton and fruits, such as watermelon. Dali was a county dated back to Qin Dynasty. It used to be named as Linjin, Dali, Wuxiang, Fengyi, Tongzhou, etc.

Kuźniki is a village in the administrative district of Gmina Ostrzeszów, within Ostrzeszów County, Greater Poland Voivodeship, in west-central Poland. It lies approximately 9 kilometres (6 mi) north-west of Ostrzeszów and 126 km (78 mi) south-east of the regional capital Poznań.

Drozdowo is a settlement in the administrative district of Gmina Stężyca, within Kartuzy County, Pomeranian Voivodeship, in northern Poland. It lies approximately 13 kilometres (8 mi) east of Stężyca, 15 km (9 mi) south of Kartuzy, and 37 km (23 mi) south-west of the regional capital Gdańsk.

Siejkowo is a settlement in the administrative district of Gmina Ryn, within Giżycko County, Warmian-Masurian Voivodeship, in northern Poland. It lies approximately 4 kilometres (2 mi) south of Ryn, 20 km (12 mi) south-west of Giżycko, and 71 km (44 mi) east of the regional capital Olsztyn.

Dolina is a village in the administrative district of Gmina Drawno, within Choszczno County, West Pomeranian Voivodeship, in north-western Poland. It lies approximately 2 kilometres (1 mi) south-east of Drawno, 26 km (16 mi) east of Choszczno, and 83 km (52 mi) east of the regional capital Szczecin.

Sansui County is a county in eastern Guizhou province, China, bordering Hunan province to the east. It is under the administration of the Qiandongnan Miao and Dong Autonomous Prefecture and is one of the province's eastern gateways.

Huitong County is a county of Hunan Province, China, it is under the administration of Huaihua Prefecturel-level City.

Zhijiang Dong Autonomous County, usually referred to as Zhijiang County is an autonomous county of the Dong people in Hunan Province, China. It is under the administration of Huaihua prefecture-level city.

The Church of the Immaculate Conception, in Huzhuang village, Pingyin county of Jinan, Shandong province, is a Catholic church registered with the Catholic Patriotic Association. It is popularly known as the Huzhuang Church or Huzhuang Catholic Church.