Tiaret (Arabic : تاهرت / تيارت; Berber: Tahert or Tihert, i.e. "Lioness") is a major city in northwestern Algeria that gives its name to the wider farming region of Tiaret Province. Both the town and region lie south-west of the capital of Algiers in the western region of the Hautes Plaines, in the Tell Atlas, and about 150 km (93 mi) from the Mediterranean coast. It is served by Abdelhafid Boussouf Bou Chekif Airport.

The name means "Lioness" in the Berber language, a reference to the Barbary lions that lived in this region. Maghrebian place names like Oran (Uhran) which means "lion", and Souk Ahras which means "Market of Lions" have the same etymological source.

A 1992 study by the University of Nice Sophia Antipolis reported significant areas contaminated by industrial pollution, and growing squatter settlements on the periphery.

The region is predominantly one of agriculture. There is a large airfield with a tower and terminal at Abdelhafid Boussouf.

The Institute of National Studies of Tiaret holds 25,000 volumes in its library. [2]

The province suffered massacres (the largest being the Sid El-Antri massacre in 1997), killings, and bombings during the Algerian Civil War, though less so than areas closer to Algiers. The Africa Institute reported in a May 2004 monograph [3] that Tiaret's more "arid and mountainous landscape has facilitated terrorist activities". The MIPT Terrorism Knowledge Base reports that Tiaret "is a frequent site of attacks by the Salafist Group for Call and Combat (GSPC)" (now known as Al-Qaeda in the Islamic Maghreb). The GSPC is "believed to have close ties to Osama bin Laden" (Paris AFX News Agency, Jul 13, 2005) and Abu Musab al-Zarqawi (Asharq Alaswat Jul 3 2005), and is reported to be active in Italy (Deutsche Welle, Jul 15 2005).

The province has been inhabited since antiquity, and there are numerous megalithic monuments. It served as a Roman station and fort, Tingartia. [4] Near Tiaret are the jedars, which are ancient mausoleums. The edifices demonstrate that the area was inhabited during the Late Antiquity by a Berber tribe(s) that could build in stone.

Tiaret grew up as a site under the domination of small Berber tribal kingdoms; the first of these being the Rustamid dynasty between 761 and 909 when Tiaret served as the capital of the area. However, this capital may have been 10 km (6 or 7 miles) west of the present-day Tiaret. It was first founded by Abd al-Rahman Rustamid, an Ibadi theologian from Greater Iran. Tiaret was said to be relatively free-thinking and democratic, being a centre for scholarship that permitted a wide range of sects and movements, notably the Mu'tazila. There were many Jews living in the area until at least the 10th century, including the scholar and doctor Judah ibn Kuraish who became the doctor to the Emir of Fes.

Tiaret occupies a strategic mountain pass at 3,552 feet (1,083 m), and was thus a key to dominating the central Maghreb. Later, from the start of the 8th century, it was the key northern terminus of the West African branch of the slave trade. As such, it offered a lucrative income from taxes on the trade, and was a desirable prize.

The Rustamid empire, which during the reign of Abdurrahman (766–784) and his son Abdul Wahab (784–823) extended over the greater part of the modern Algeria, was known as the Ibadite Empire from Abdallah ibn Ibad, the founder of the sect to which Abdurrahman belonged. Seven princes of the Rustamite house succeeded Abdul Wahab until they were overthrown by the Fatimite general Abu Abdallah al-Shi'i in 909. [4]

From the year 911 Tiaret was fought over by a number of tribes, being first captured by Massala ibn Habbus of the Miknasas in the year 911, in alliance with the Fatimid Caliphate. Finally, in 933, it was in the hands of the Fatimids. After 933 Tiaret ceased to be the capital of a separate state. Most of the population was banished to Ouargla and then escaped to the inhospitable M'zab. [4] [5] From 933 Tiaret attracted many Khawarij Muslim settlers from Iraq.

From 933 it was administered as part of the Kingdom of Tlemcen, and in the 16th century fell to the Ottoman Empire. [4] In 1843 it fell to the French after they defeated Emir Abdelkader El Djezairi.

The modern town of Tiaret is built around a French redoubt of 1845. The new town attracted many settlers from France and the area flourished. A 200 km (120 mi) narrow gauge railway arrived in 1889, connecting the town to Mostaganem - today, this rail line is defunct.

Thirty kilometres (18 miles) S.S.W. of Tiaret are the sepulchral monuments known as the Jedars. [4] The name is given to a number of sepulchral monuments placed on hill-tops. A rectangular or square podium is in each case surmounted by a pyramid. The tombs date from the 5th to the 7th century, and lie in two distinct groups between Tiaret and Frenda. [6]

At Mechra-Sfa ("ford of the flat stones"), a peninsula in the valley of the river Mina not far from Tiaret, are said to be "vast numbers" of megalithic monuments. [6]

In Tiaret, there is a Mediterranean climate. In winter there is more rainfall than in summer. The Köppen-Geiger climate classification is Csa. The average annual temperature in Tiaret is 14.7 °C (58.5 °F). About 529 mm (20.83 in) of precipitation falls annually.

Algeria, officially the People's Democratic Republic of Algeria, is a country in North Africa. Algeria is bordered to the northeast by Tunisia; to the east by Libya; to the southeast by Niger; to the southwest by Mali, Mauritania, and Western Sahara; to the west by Morocco; and to the north by the Mediterranean Sea. It is considered to be a part of the Maghreb region of North Africa. It has a semi-arid geography, with most of the population living in the fertile north and the Sahara dominating the geography of the south. Algeria covers an area of 2,381,741 square kilometres (919,595 sq mi), making it the world's tenth largest nation by area, and the largest nation in Africa. With a population of 44 million, Algeria is the ninth-most populous country in Africa, and the 32nd-most populous country in the world. The capital and largest city is Algiers, located in the far north on the Mediterranean coast.

The archeology in Algeria is rich in prehistoric memorials of human occupation. Algeria contains many Roman remains and is rich in monuments of Saracenic art.

Medieval Muslim Algeria was a period of Muslim dominance in Algeria during the Middle Ages, spanning the millennium from the 7th century to the 17th century. The new faith, in its various forms, would penetrate nearly all segments of society, bringing with it armies, learned men, and fervent mystics; in large part, it would replace tribal practices and loyalties with new social norms and political idioms.

Kabylia is a cultural, natural and historical region in northern Algeria and the homeland of the Kabyle people. It is part of the Tell Atlas mountain range and is located at the edge of the Mediterranean Sea.

The Rustamid dynasty was a ruling house of Ibāḍī imāms of Persian descent centered in Algeria. The dynasty governed as a Muslim theocracy for a century and a half from its capital Tiaret until the Ismaili Fatimid Caliphate defeated it. Rustamid authority extended over what is now central and western Algeria, parts of southern Tunisia, and the Jebel Nafusa and Fezzan regions in Libya as far as Zawila.

The Zenata are a group of Amazigh (Berber) tribes, historically one of the largest Berber confederations along with the Sanhaja and Masmuda. Their lifestyle was either nomadic or semi-nomadic.

The Kutama was a Berber tribe in northern Algeria classified among the Berber confederation of the Bavares. The Kutama are attested much earlier, in the form Koidamousii by the Greek geographer Ptolemy.

The Miknasa was a Zenata Berber tribe in Morocco and Algeria. 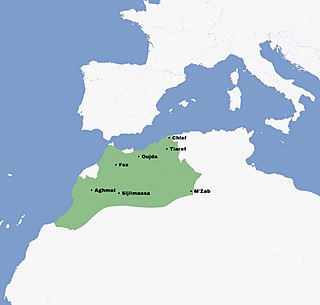 The Maghrawa or Meghrawa were a large Zenata Berber tribal confederation whose cradle and seat of power was the territory located on the Chlef in the north-western part of today's Algeria, bounded by the Ouarsenis to the south, the Mediterranean Sea to the north and Tlemcen to the west. They ruled these areas on behalf of the Umayyad Caliphate of Cordoba at the end of the 10th century and during the first half of the 11th century.

The Kabyle people are a Berber ethnic group indigenous to Kabylia in the north of Algeria, spread across the Atlas Mountains, 160 kilometres (100 mi) east of Algiers. They represent the largest Berber-speaking population of Algeria and the second largest in North Africa. 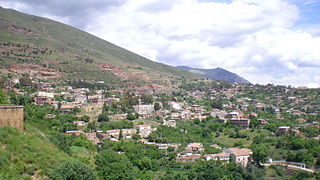 Miliana is a commune in Aïn Defla Province in northwestern Algeria. It is the administrative center of the daïra, or district, of the same name. It is approximately 114 kilometres (71 mi) southwest of the Algerian capital, Algiers. The population was estimated at 44,201 in 2008. The town is located south of the Dahra Range, on the wooded southern flank of Mount Zaccar Rherbi, five kilometers north of the Chelif River, and overlooking the Zaccar plateau to the west. 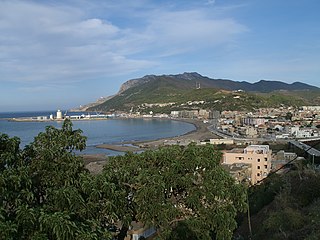 Ténès is a town in Algeria located around 200 kilometers west of the capital Algiers. As of 2000, it has a population of 65,000 people.

The Berbers are an indigenous ethnic group of the Maghreb region of North Africa. Following the Muslim conquest of the Maghreb, most Berber tribes eventually became Muslims. Presently, about one-sixth of the population of Maghreb speaks one of the Berber languages, but most of them also speak some form of Arabic. Berbers are the first non-Arab people to have established an Islamic state.

The History of early Islamic Tunisia opens with the arrival of the Arabs who brought their language and the religion of Islam, and its calendar. The Arab conquest followed strategy designed by the Umayyad Caliphate regarding its long-term conflict with the Byzantine Empire. The native Berbers eventually converted to Islam. They might have seen some similarities between themselves and the Arabs, in similar cognate culture, such as familiarity with a pastoral way of life. The first local Islamic ruling house, the Aghlabids, consisted primarily of rule by leading members of this Arab tribe. Fundamental elements of Islamic civilization were established. Although accepting Islam, many Berbers nonetheless resisted rule by the Arabs, establishing the Rustamid kingdom following the Kharijite revolt. Next in Ifriqiya (Tunisia) arose the Shia Fatimids, inspired by a few immigrants from the east yet consisting for the most part of Ifriqiya Berbers. The Fatimids later expanded their rule east, through conquest by Berber armies of Egypt, and established their caliphate there which came to include Syria and the Hejaz. 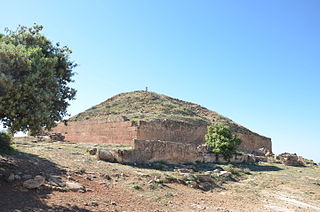 Jedars are thirteen Berber mausoleums located south of Tiaret city in Algeria. The name is derived from the Arabic: جدار jidār (wall), which is used locally to refer to ancient monumental ruins. These pre-Islamic tombs date from Late Antiquity.

Igilgili was a Berber town and a Phoenician, Carthaginian, and Roman colony in located in present-day Jijel, Algeria.

The Ifranid Emirate of Tlemcen or Ifranid Kingdom of Tlemcen, was a Kharijite state, founded by Berbers of the Banu Ifran in the eighth century, with its capital at Tlemcen in modern Algeria.

The architecture of Algeria encompasses a diverse history influenced by a number of internal and external forces, including the Roman Empire, Muslim conquest of the Maghreb, French colonization, and movements for Algerian independence.

Achir or Ashir is an ancient city in Algeria, first capital of the Muslim dynasty of the Zirids, under Fatimid suzerainty, located at an altitude of 4,593 feet in the Titteri Mountains, in the current Algerian commune of Kef Lakhdar.