Tiarnán Mulvenna (born 10 December 1988) is an Irish footballer who plays as a forward.

Tiarnán Mulvenna is a striker. He signed for Dundalk in 2006 after impressing in the youth team at Oriel Park. Although born in Belfast, Mulvenna grew up in Dundalk. [1] Mulvenna is tipped for a big future in football.

Mulvenna was given a senior contract with Dundalk by manager John Gill in 2006 following a striker crisis at Oriel Park. In November 2006, Mulvenna was an unused substitute in a promotion/relegation play-off against Waterford United at the RSC. He had to wait until May 2007 to make his debut for the club when he came on as a substitute in the last five minutes against Athlone Town in a First Division match which Dundalk won 2–0 at Lissywoollen thanks to goals from Shaun Williams and Philip Hughes. His first ever career goal came at Oriel Park in September 2007 when he netted in a 4–0 win over Kilkenny City in the First Division. He made his name at the club when he scored twice in a 3–0 win over Monaghan United in the League of Ireland Cup First Round at Oriel Park in March 2008. Mulvenna was offered a full-time contract by the board of Dundalk for the 2009 season which he accepted. Then in the 2010 season he found it hard to break into the team only making seven league appearances which resulted in Mulvenna terminating his contact on 19 August 2010 citing lack of first team football as the reason behind leaving his home town club. Mulvenna signed for Shelbourne but there was a problem with his registration and found himself unable to sign for a club until June.

Mulvenna re-joined Dundalk for the 2013 season.

On 13 January 2014, Mulvenna completed a move to Glenavon in the NIFL Premiership. He signed an 18-month deal for the club. [2]

On 22 August 2014, it was announced that Mulvenna had signed a two-year contract for reigning NIFL Premiership champions Cliftonville in a swap deal with Glenavon, which saw Cliftonville midfielder Ciaran Caldwell going to Mourneview Park in return. [3]

On 22 January 2015, Drogheda United announced that Tiarnán had resigned for them. [4] It is reported that Mulvenna left Cliftonville "by mutual consent". [5]

On Tuesday 22 December, it was announced journeyman Mulvenna had joined Warrenpoint Town as a replacement for outgoing striker Daniel Hughes.

It was announced in January 2017 that Mulvenna had signed for Portadown. Mulvenna left the club following their relegation after only a handful of appearances.

Now Mulvenna is a youth coach for Dundalk U15's 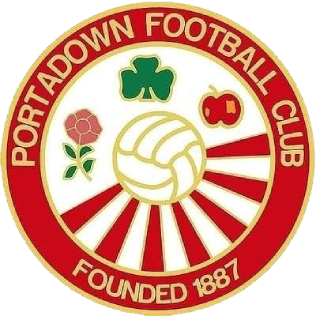 Ards Football Club is a semi-professional, Northern Irish football club playing in NIFL Championship. The club is based in Newtownards, but plays its home matches at the Bangor Fuels Arena in Bangor, which it rents from rivals Bangor to play home games. The club colours are red and blue.

Diarmuid O'Carroll is an Irish retired professional footballer. Diarmuid also worked in numerous roles throughout football such as for the Irish Football Association as Club and Community Development Officer within the Football Development Department.

Ruaidhrí Higgins is a retired Northern Irish footballer who was best known for his time at Derry City.

Declan 'Fabio' O'Brien is a former professional footballer who played as a striker. He is Drogheda United's top goalscorer of all time.

The NIFL Development League is an intermediate Association football league in Northern Ireland consisting of the reserve teams of the twelve NIFL Premiership clubs.

Gabriel Sava is a Romanian professional footballer who plays as a goalkeeper for Warrenpoint Town in the NIFL Premiership. He was born in Bacău and played youth football for Lazio, before beginning a career in Ireland in 2001. Throughout his career there, he has played for Drogheda Town, Bray Wanderers, Monaghan United, Drogheda United, Dundalk and Bray Wanderers. He has made three appearances in the UEFA Europa League throughout his career and was a member of Dundalk's squad when they became the first Irish side to reach the play-off round of the UEFA Champions League in August 2016.

David Gerard McDaid is an Irish professional footballer who plays for NIFL Premiership side Larne as a striker.

Daniel Anthony Kearns is an Irish professional footballer who plays as a midfielder for NIFL Premiership club Linfield. Kearns joined Peterborough United from Dundalk in 2011 and had spells on loan with York City, Rotherham United and Chesterfield.

Ruaridhri James Patrick Donnelly is a Northern Irish professional footballer who plays as a striker for Glentoran.

The 2013–14 Northern Ireland Football League Cup was the 28th edition of Northern Ireland's secondary football knock-out cup competition, and the first season under the control of the Northern Ireland Football League. It was contested by the 12 members of the NIFL Premiership and the 30 members of the NIFL Championship. The competition began on 13 August 2013 and ended on 25 January 2014 with the final. The competition was without a principal sponsor up until the final, as Irn Bru ended their sponsorship following the conclusion of the 2012–13 competition. WASP Solutions became the Cup's new sponsor in January 2014.

Joseph Anthony Gormley is a footballer from Northern Ireland who plays for Cliftonville in the NIFL Premiership. Gormley played for amateur side Crumlin Star, before making the move to Cliftonville. On 14 June 2015, Gormley made the transition to professional football, signing for Football League One side Peterborough United. After suffering a serious knee injury, Gormley moved on loan to Scottish club St Johnstone in August 2016. After becoming "disillusioned" with professional football, Gormley cancelled his contracts with Peterborough and St Johnstone. After much speculation, it was announced in January 2017 that Gormley would rejoin Cliftonville for the 2017/18 season.

The 2017–18 NIFL Premiership was the 10th season of Northern Ireland's highest national football league in this format since its inception in 2008, the 117th season of Irish league football overall, and the fifth season of the league operating as part of the Northern Ireland Football League. The season began on 11 August 2017 and concluded on 28 April 2018, with the play-offs taking place in May 2018. 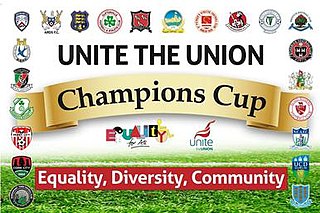 Michael O'Connor is an Irish professional footballer who plays as a striker for Shelbourne. He previously played for Scottish Premiership club Ross County, League of Ireland clubs Dundalk, Shamrock Rovers, Finn Harps & Waterford, as well as NIFL Premiership side Linfield.