Tiatia is a rare Samoan surname, generally only found in the Samoan village of Gataivai. Notable people with the surname include:

Earl Va'a is a former rugby union and rugby league footballer who played internationally for Samoa. He has played as a fly-half in union and as a fullback and five-eighth in league.

Apollo Perelini is a New Zealand former dual-code international rugby union and rugby league footballer who played in the 1990s and 2000s, and has coached in the 2000s and 2010s. He played representative rugby union (RU) for New Zealand Under-21s, Samoa and World XV and at club level for Auckland, North Harbour and Sale Sharks, and representative rugby league (RL) for Western Samoa and at club level for St Helens, as a prop or second-row. 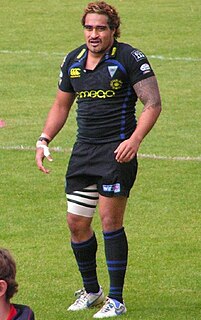 Henry Fa'afili is a Samoan-born New Zealand former professional rugby league and rugby union footballer who played in the 1990s, 2000s and 2010s. He played representative rugby league (RL) for New Zealand Secondary Schools, the New Zealand Junior Kiwis, New Zealand and Samoa, and at club level for Auckland Warriors and the Warrington Wolves, as a wing, centre, stand-off, or second-row, he switched codes in 2007, and played representative rugby union (RU) for Samoa, and at club level for Biarritz Olympique, Leeds Carnegie and Connacht Rugby, as a wing, or centre.

Steven So'oialo is a Samoan rugby union footballer. He played scrum-half for English club Harlequins and formerly Orrell. He played for Manu Samoa in the 1999 and 2003 Rugby World Cup. He also played for the Pacific Islanders team in 2004. He is the older brother of New Zealand All Blacks rugby union international and Wellington Hurricanes Super Rugby player, Rodney So'oialo, and of James So'oialo, who has also represented Samoa internationally.

So'oialo is a surname, and may refer to: 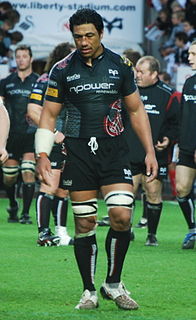 Afoa is a surname. People with this surname include:

The Western Suburbs RFC, or Wests Roosters, is a rugby union club based in Wellington, New Zealand. Wests is a constituent club of the Wellington Rugby Football Union. The club was founded in 1983 as an amalgamation of the Athletic, Karori and Onslow rugby clubs. Wests won the Jubilee Cup in 1998 and the Hardham Cup in 2000, and 2003.

Chase Jackson Tiatia is a New Zealand-born, Samoan rugby union player who currently plays as a utility back for Bay of Plenty in New Zealand's domestic Mitre 10 Cup. He’s also a key player in the Wellington Hurricanes back line.

Filo or Fillo may refer to the following people:

Vaea is a Polynesian surname and male given name, derived from that of Mount Vaea on Upolu island, Samoa.